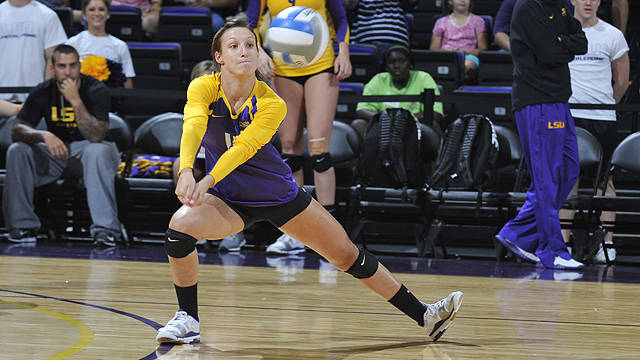 HOUSTON – The LSU volleyball team secured its third non-conference tournament title and wrapped up its eight-match, three-weekend road trip with an efficient 3-1 victory over Houston [25-17, 22-25, 25-19, 25-19] to open day two of the Flo Hyman Collegiate Cup Saturday as 1,520 fans gathered at the Athletics/Alumni Center.

“Really and truly, our team should understand that a 10-1 start is a pretty nice accomplishment for this young team,” head coach Fran Flory said. “I think our international trip helped us play on the road, and we’re still reaping the benefits from that trip. This phase of our season is over, and we start phase two on Monday. Our team should start SEC play with a lot of confidence next week.”

LSU compiled 54 kills and a .277 hitting percentage which included plus .300 attacking efforts during sets one and four. Malorie Pardo turned in a solid all-around effort with 45 assists, 15 digs and five blocks. It was her third double-double of the weekend, and the five blocks equaled a career-high.  For her efforts, Pardo was named the tournament’s MVP.

“This was a great finish to the tournament schedule for our team,” Pardo said. “We’ve had a long three weeks on the road, but I’m very happy that our team was able to pull together and fight as a unit. Each win we can get is important and count as much as the last one. I’m really proud of our team.”

Briana Holman reached double figure kills for the ninth straight match. She smacked a team-leading 17 kills on a .467 hitting clip and tacked on seven blocks. Katie Lindelow knocked 10 kills, 10 digs and notched another perfect passer performance over her 22 reception attempts.

Haley Smith registered 14 digs and earned an all-tournament nod. It was Smith’s seventh consecutive outing with 10 or more digs at the libero position.

Houston’s offense was led by Sarita Mikals and Cortney Warren, who cranked 17 kills apiece. Destiny Patterson stretched out for a match-leading 21 digs for the Cougars.

The first set featured 10 ties and six early lead changes. Trailing 11-10, LSU ripped off nine of the next 12 points to seize the momentum. The Tigers received four consecutive kills from Holman, Katarina Raicevic, Mahaffey and Lindelow to go ahead 15-12. Houston responded with back-to-back points of its own to get back to within 15-14, but LSU fired back with a two blocks involving Pardo coupled with a Pardo second-contact kill. The Tigers closed out the 25-17 victory with their seventh stuff of the frame courtesy of Holman and Pardo.

“I thought our players came with a little bit of a different focus, and it helped them get off to a better start during today’s match,” Flory said. “Part of the slow starts has been due to using different lineups so I’ll absorb part of the responsibility. I have a lot of trust and confidence in our players. I think everyone should seize the opportunity and run with it. The disappointing thing was we didn’t sustain it into set two. We got Houston’s best shot and couldn’t break their serve-receive early.”

Houston regrouped in set two and racked up 20 kills on a match-best .412 hitting percentage. All square at 19-19, the Cougars put together a 4-1 minispurt aided by three Warren kills to go up 23-20. Houston came away with a 25-22 win to even the match at a set apiece. In total, Warren hammered eight kills during the frame.

Out of the locker room, LSU turned up its defensive intensity and forced the Cougars into nine hitting miscues during the third set. Knotted at 8-8, Lindelow buried back-to-back kills, added a double stuff with Holman and Katie Dunlap slapped an ace to give LSU a 12-8 lead. Houston sliced the deficit down to two points on three occasions, the latest at 15-13. Leak ripped consecutive spikes, and the Tigers capped the 25-19 win on a Houston hitting error.

“We adjusted our blockers between sets two and three,” Flory said. “They were being a step lazy and not looking at approach angles to line up properly. It was hard for them to take that extra step after two hard five-set matches yesterday. You have to credit Houston’s hitters too, they hit some great shots and adjusted to our blocking scheme. Credit our kids for adapting, our pin blockers did a good job of channeling balls and creating chances for our middles to turn the momentum of the match.”

LSU led wire-to-wire in set four and raced out to a commanding 17-7 advantage. The Tigers rode Holman to nine kills on 10 errorless swings and picked up a 25-19 victory. LSU also converted on 15-of-19 in the sideout department.

“Dominate was our word today,” Pardo said. “We wanted to dominate the rally and put the ball on the floor with our first swing. Not so much dominate the opposing side, we wanted to dominate our side. My connection with Bri keeps getting better and better each week. I’m proud of her because she works so hard in practice. I know where she wants the ball, and she makes the right decisions. It’s easy to set her now, that’s a big key to our offense. She’s doing a great job using all of her shots.”

LSU turns its attention to SEC play and returns home Friday to meet Georgia. First serve is scheduled for 7 p.m. from the Maravich Center. Live video and live stats will be available for Geaux Zone subscribers at www.LSUsports.net/live.

Admission to all 2013 home matches is free compliments of the Advocate’s “Geaux Free” program. Fans are encouraged to wear gold during the Georgia match to support the Tigers as part of the program’s annual “Gold Match”, the first 500 fans will receive a “Gold Digger” tank top.

Friday’s match marks the first of six “Attend & Win” matches where one fan will take home a 32-inch television. To be eligible for the “Attend & Win” prizes, fans must stay through the entire match.

The “Friday Night Meal Deal” returns as LSU concessions will provide a special menu for only $7 per meal beginning at 6 p.m. inside the Courtside Club located at the Northwest entrance. To reserve a “Meal Deal” in advance, email promotions@lsu.edu with the quantity of meals and names. The Georgia match menu consists of Chicken Florentine with angel hair pasta and a vegetable medley.