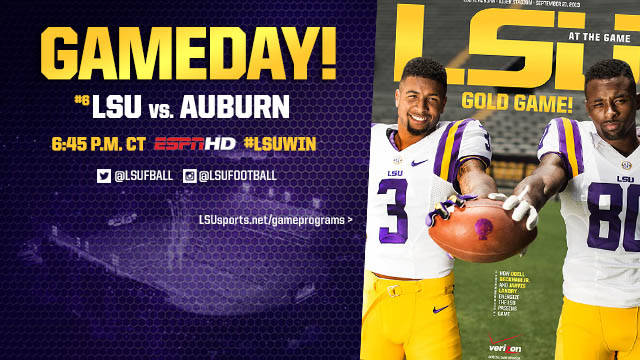 BATON ROUGE – A pair of undefeated Tigers square off in what will be a rain-soaked Tiger Stadium tonight as No. 6/7 LSU hosts Auburn in what will be LSU’s conference opener.

Forecast calls for the rain to be out of the area come kickoff at 6:45 tonight, but heavy downpours in the area on Friday night could make for sloppy conditions. Nevertheless, a sellout crowd of over 92,000 is expected in Tiger Stadium, a venue that has seen LSU go 39-2 in Saturday Night games in Death Valley under Les Miles.

LSU brings a streak of 27 straight victories in during the month of September into the contest, a stretch that goes back to the 2006 season. Auburn’s 7-3 win over LSU in Jordan-Hare Stadium in 2006 is the last time LSU has lost during the month.

LSU has climbed to No. 6 in the Associated Press poll and No. 7 in the USA Today Coaches poll with its 3-0 start. The Tigers have outscored their first three opponents 138-57.

Auburn has won its first three games, including a 24-20 SEC win over Mississippi State, under first-year coach Gus Malzahn.

Last year, LSU beat Auburn, 12-10, in Jordan-Hare Stadium for its sixth win the last eight games in the series. .

“We’ve had another good week of preparation,” LSU coach Les Miles said. “We are healthy and ready to go. We worked this week with the weather in mind. When you’re in Louisiana, you work wet footballs a lot. We are familiar with that and will be ready to operate in the rain if necessary.”

LSU goes into tonight’s game with an offense that is among the national leaders in scoring with 46.0 points per game. LSU’s piled up the points with a balanced offensive attack led by senior quarterback Zach Mettenberger, who leads the SEC in pass efficiency.

Mettenberger has connected on 45-of-69 passes for 797 yards and nine touchdowns. Mettenberger is the first quarterback in school history to throw nine TD passes and have three games of 250 yards or more to open a season.

Mettenberger’s top two targets have been junior receivers Odell Beckham Jr. and Jarvis Landry, who have combined to catch 32 passes for 576 yards and all nine of LSU’s passing touchdowns. Landry leads the team in receptions (17) and TDs (5), while Beckham has caught 15 passes for 330 yards and a whopping 22.0 yards a reception.

With a wet field tonight, LSU will likely have to rely heavily on its running game, which is led by junior Terrence Magee (210 yards, 3 TDs) and sophomore Jeremy Hill (167 yards, 3 TDs). Hill and Magee both had 100 rushing yards last week against Kent State.

The LSU offense will be challenged by an Auburn defense that has gotten better each week. Auburn is allowing just 17.7 points and 433 total yards per game.

Defensively, LSU will be challenged by Auburn’s fast-paced attack as the Tigers will attempt to spread LSU out with its up-tempo pace. Auburn is averaging 31.0 points and 440.3 total yards per game.

“Being ready is the issue,” Miles said of defending the Auburn up-tempo offense. “You have to make sure that the call is in, communications is done and we’re ready, and we’re not paused to communicate but in fact we are feet north and south, keyed in on our responsibility and ready to play.  I look forward to that.  I think it’s something that we’ve practiced, in my opinion, every day since probably two springs ago.

“There is always a piece of every practice donated to an up tempo style of offense. So we feel like we’ve got a handle on it, it just needs to be made perfect.”

LSU will counter the Auburn offense with a defense that continues to improve each week. LSU will get some much-needed experience back on the field this week with the return of senior safety Craig Loston, who missed last week’s game with a minor injury.

In three games, LSU has allowed just one passing touchdown and they’ve limited opponent to a total of five TDs.

“There’s more sense of urgency, more pick up in our step,” Miles said of the SEC opener for LSU. “It’s conference play.

“We would encourage and would enjoy a crowd that was naturally passionate for their Tigers and would raise the decibel levels so that the opponent would have difficulty in using the ability to communicate. We would like it to be rocking.  We want Tiger Stadium to be at its best. There’s nothing better than a Saturday night in Tiger Stadium no matter what the weather is like.”