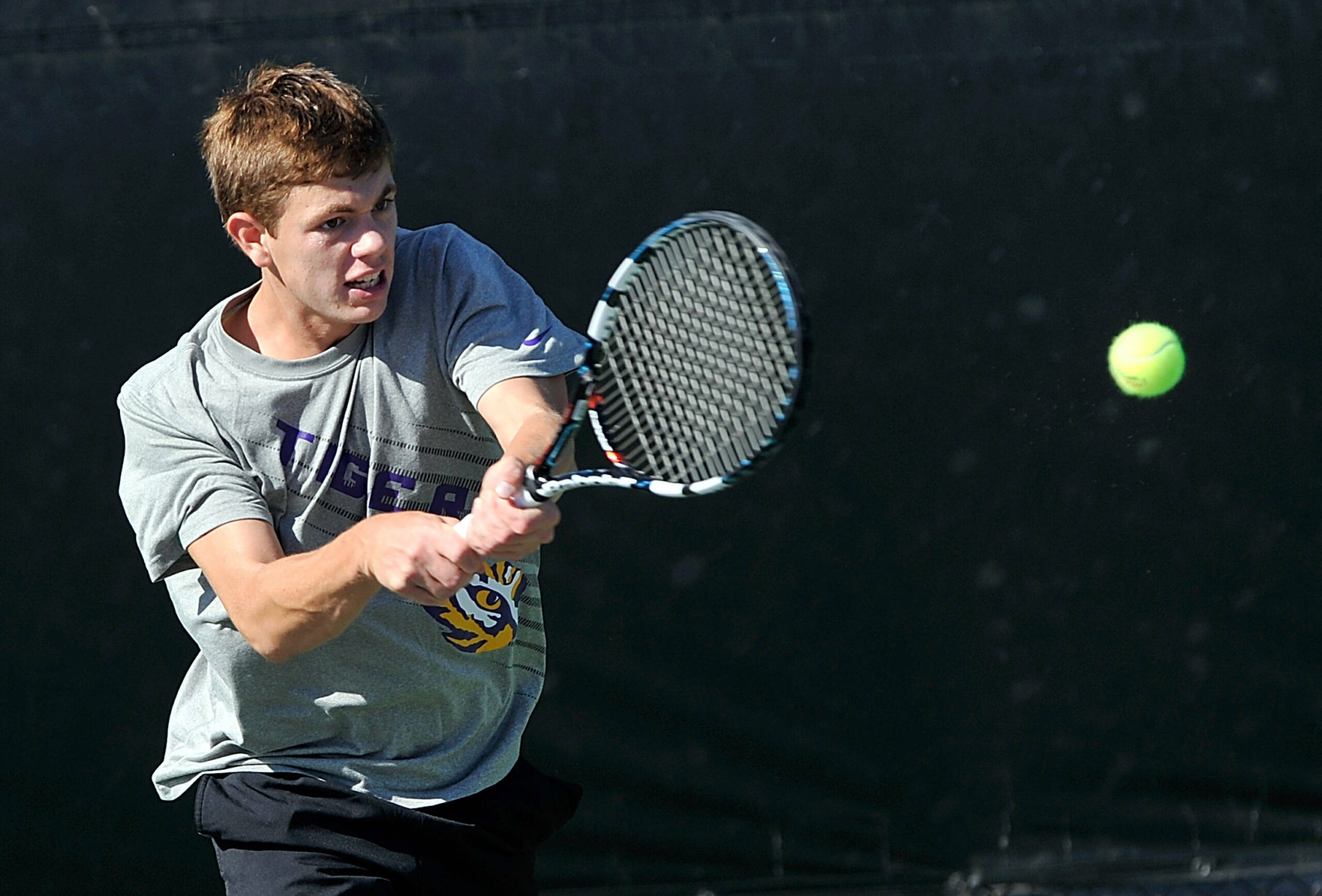 NASHVILLE, Tenn. – The LSU men’s tennis team was back in action today at the 2013 SEC Fall Classic hosted by Vanderbilt at the Currey Tennis Center. The third round for singles and doubles was played today as well as the first and second rounds of the singles consolation bracket.

After pulling off an upset over No. 4 Tom Jomby and Kevin Lai of Kentucky yesterday, LSU’s doubles pair of Chris Simpson and Boris Arias took down Alabama’s Hayes Brewer and Stuart Kenyon 8-4 to advance to the quarterfinals tomorrow. They will square off against Vanderbilt’s No. 13 duo of Ryan Lipman and Gonzales Austin.

LSU’s other doubles pair of Harrison Kennedy and John Michael Busch won a close match yesterday in the second round, defeating Texas A&M’s Tito Moreiras and Behzad Minavi 8-6. Their tournament run came to an end this afternoon after suffering an 8-5 loss to Georgia’s Hernus Pieters and Nathan Pasha.

In singles, No. 29 Simpson picked up where he left off yesterday, taking down Texas A&M’s Frankie Colunga 6-2, 6-0. After advancing to the fourth round, Simpson faced Florida’s No. 52 Florent Diep for a shot to advance to the quarterfinals. The first set went deep into a tiebreaker, but Simpson pulled out a 7-6(7) win to take the set. The second set was also decided by a tiebreaker and Simpson dominated a shutout his opponent to take the set 7-6(0) and win the match 7-6(7), 7-6(0) to move on to the quarterfinals where he will face Texas A&M’s Shane Vinsant, ranked No. 56 in the country.

“Chris Simpson played a mature match against a talented opponent,” head coach Jeff Brown said. “It is good to see him rewarded for his practice habits.”

Sophomore Tam Trinh strung together two great performances in the first and second rounds yesterday, defeating Arkansas’ Pete Thomason 6-1, 6-3, and South Carolina’s Thiago Pinheiro 6-3, 6-4. In his third round match this afternoon, he was defeated by No. 67 Harrison Adams of Texas A&M 6-4, 5-7, 6-3.

The first and second round of the consolation singles matches were also played today and multiple Tigers were in the field.

Sophomore Arias dealt a 6-2, 6-4 loss to Vanderbilt’s Jeffrey Offerdahl in the first round. Arias was then eliminated in the second round after a 6-1, 6-3 loss to Florida’s Elliott Orkin.

Newcomer Andrew Korinek was also victorious in his first round match, defeating Alabama’s Kenyon 6-2, 3-6, 6-2. Korinek also won his second round match, taking down Robin Haden of Mississippi State in straight sets 7-5, 6-2. Korinek will face Arkansas’ Hall Fess tomorrow in the third round.

Kennedy, Busch, and Eric Perez all received first round byes.