Volleyball Rallies for Comeback Over Baylor 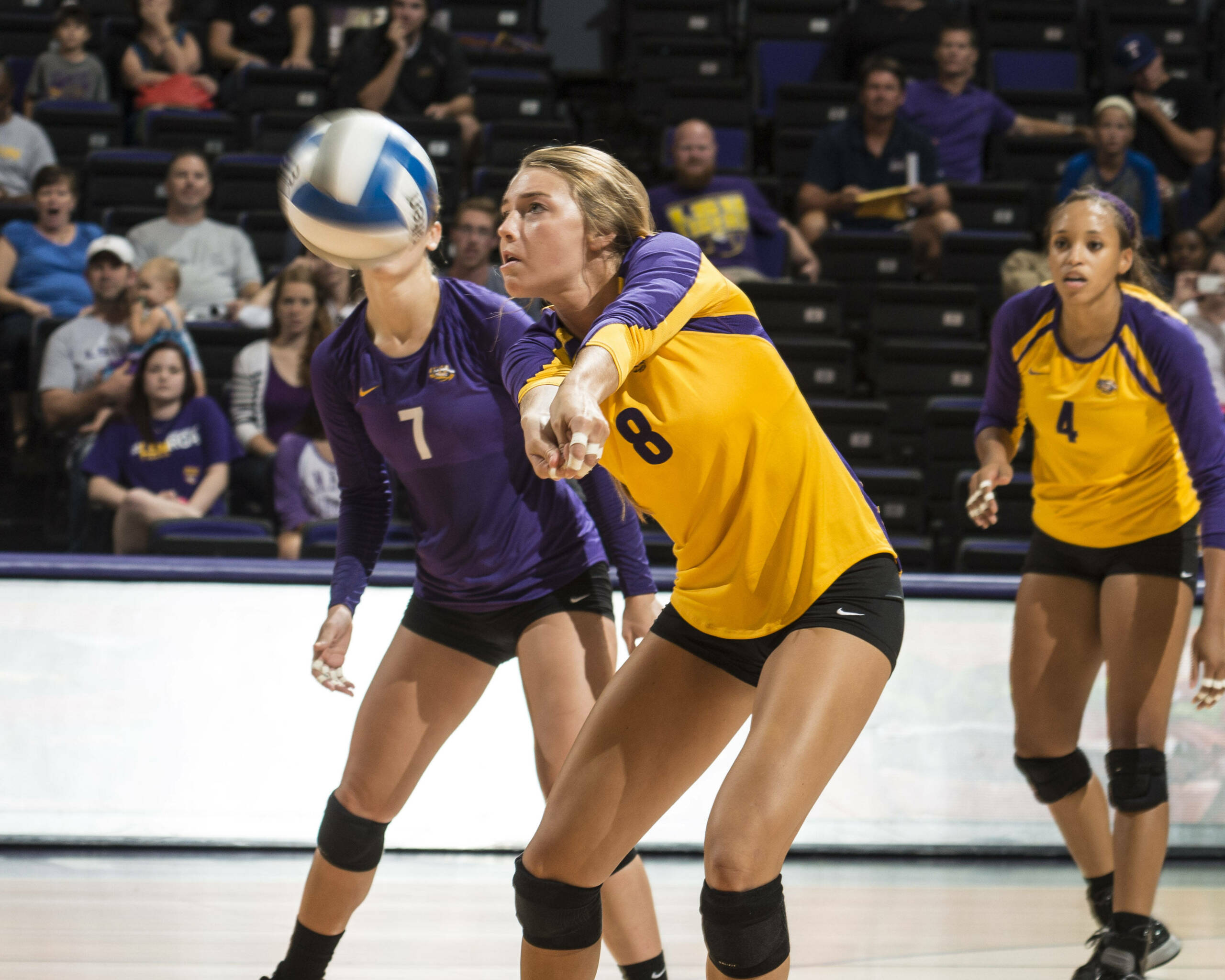 HOUSTON — The LSU volleyball team turned away a two-set deficit for the second time in a week as the Tigers charged back for a five-set comeback victory over Baylor [26-28, 18-25, 25-16, 25-18, 15-8] during the second match of the Flo Hyman Collegiate Cup  Friday at the Athletics/Alumni Center on the University of Houston campus.

The Tigers (9-1) erased a two-set hole to end Miami’s 18-match home winning streak last Friday. The last time Baylor (5-8) gave up a 2-0 lead came against Kansas State on October 25, 2008 which ended a run of 53 straight two-set conversions by the Bears.

“I can’t say enough about the resiliency that our team showed,” head coach Fran Flory said. “With that being said, we can’t continue to keep falling behind by two sets. We’re going to have to figure out the starting gate problem, and we’re going to have to learn how to start faster. The positive is that our group has been able to gain a lot confidence going late into matches and how to respond with our backs against the wall. Certainly, a great comeback win over a quality Baylor program.”

Briana Holman cranked a career-high kills output for the second straight match. The reigning two-time SEC Freshman of the Week powered home 19 kills and added seven blocks to pace LSU. It was Holman’s eight consecutive outing with 10 or more kills.

Katie Lindelow and Khourtni Fears also came away career performances for the Tigers. Lindelow hammered 18 kills on a .304 hitting percentage to go along with 13 digs for her second career double-double whereas Fears popped 12 kills and five blocks. It marked the first time that Fears amassed double digit kills in her career.

Helen Boyle and Katarina Raicevic provided LSU with critical sparks off the bench. Boyle smacked 14 kills and reeled in 14 digs in her first extended action of the season, while Raicevic tacked on five kills on a .444 hitting clip and three blocks.

“Helen had been struggling a little bit to find her rhythm,” Flory said. “We talked to her in between matches and told her that she’s a veteran that’s been there and done that. She’s won a lot of matches for our program. We told her to trust herself, and it was key that we figured out how to get her into a rhythm. The depth of our team won this match for us. I have a lot of trust and a lot of confidence in everybody on the team.”

Malorie Pardo dished out 62 assists and sprawled out for a season’s best 18 digs to secure her fourth double dip of the season. She led LSU’s offense to 45 kills and .344 hitting ratio over the final three sets which included a match-leading .429 hitting efficiency during the winner-take-all fifth set.

Haley Smith reeled in 24 digs to equal a career-high. She has registered double figure scoops over all six of her starts at the libero spot. The Meraux native also compiled a perfect-passer rating in her 19 reception attempts. Lauren Whalen checked in with eight digs for the Tigers.

LSU concluded its comeback in-style and ripped off the first eight points of the fifth set. Pardo’s tough serving was coupled with two Lindelow kills, two Holman-Raicevic blocks, a Holman kill and a Raicevic spike. The Bears got as close as six points three times, the latest at 14-8. However, Lindelow brought LSU to the finish line with a sideout spike to finish off the 15-8 triumph.

“Malorie was having problems with her serve for the most of the match,” Flory said. “Thanfully, she was able to get going to start that fifth set and has been a strong server for us the entire server. Malorie continues to mature and continues to understand the game on a different level. She helped set the tone for our defense by talking to our blockers about what she saw from Baylor’s offense. I thought this match was another positive step for her.”

Baylor sprinted out to a 15-10 edge in set one behind four blocks all involving Itiola. Behind 23-18, LSU made a late charge behind Lindelow’s serve. The Tigers forced Baylor into two hitting errors followed by Leak and Holman kills sandwiched between a Holman-Madi Mahaffey stuff to draw even at 23-23. LSU turned away a set point after a Holman sideout spike and had a set point chance at 25-24 after a Lindelow kill. The Bears responded with three of the final four points to take a 28-26 decision.

Baylor carried that momentum into the second set and raced out to a 13-6 advantage. The Tigers attempted a comeback and pulled back to 16-13 after consecutive kills courtesy of Fears and Holman. Baylor responded with nine of the next 14 points to complete the 25-18 win.

Down 11-10 in set three, LSU began its rally behind eight straight points to turn the tables and take an 18-11 lead capped by a Smith ace. The run was fueled by two blocks involving Fears and two Boyle kills. In total, the Boyle-Fears-Lindelow trio accounted for 13 of LSU’s 16 kills as the Tigers collected a 25-16 victory.

The fourth set featured nine ties and four lead changes as the two teams split the first 22 points. Ahead 18-16, the Tigers used a strong finishing kick and picked up seven of the final nine points en route to a 25-18 win. Lindelow notched two aces and Holman crushed two kills to ignite the spurt. A key to the win was LSU’s ability to convert on 15-of-18 sideout attempts.

“Katie is a workhorse who just finds a way to win no matter what the circumstances are,” Flory said. “You give her a chance, she’s going to go running through that door and come home with the victory. I’m really proud of her effort front row and back row. She’s the type of player that never going to give up and never going to say die.”

LSU wraps up its eight-match, three-weekend road swing Saturday against tournament host Houston. First serve is slated for 11 a.m. from the Athletics/Alumni Center. Live audio and live stats will be available for free inside the Geaux Zone at www.LSUsports.net/live.