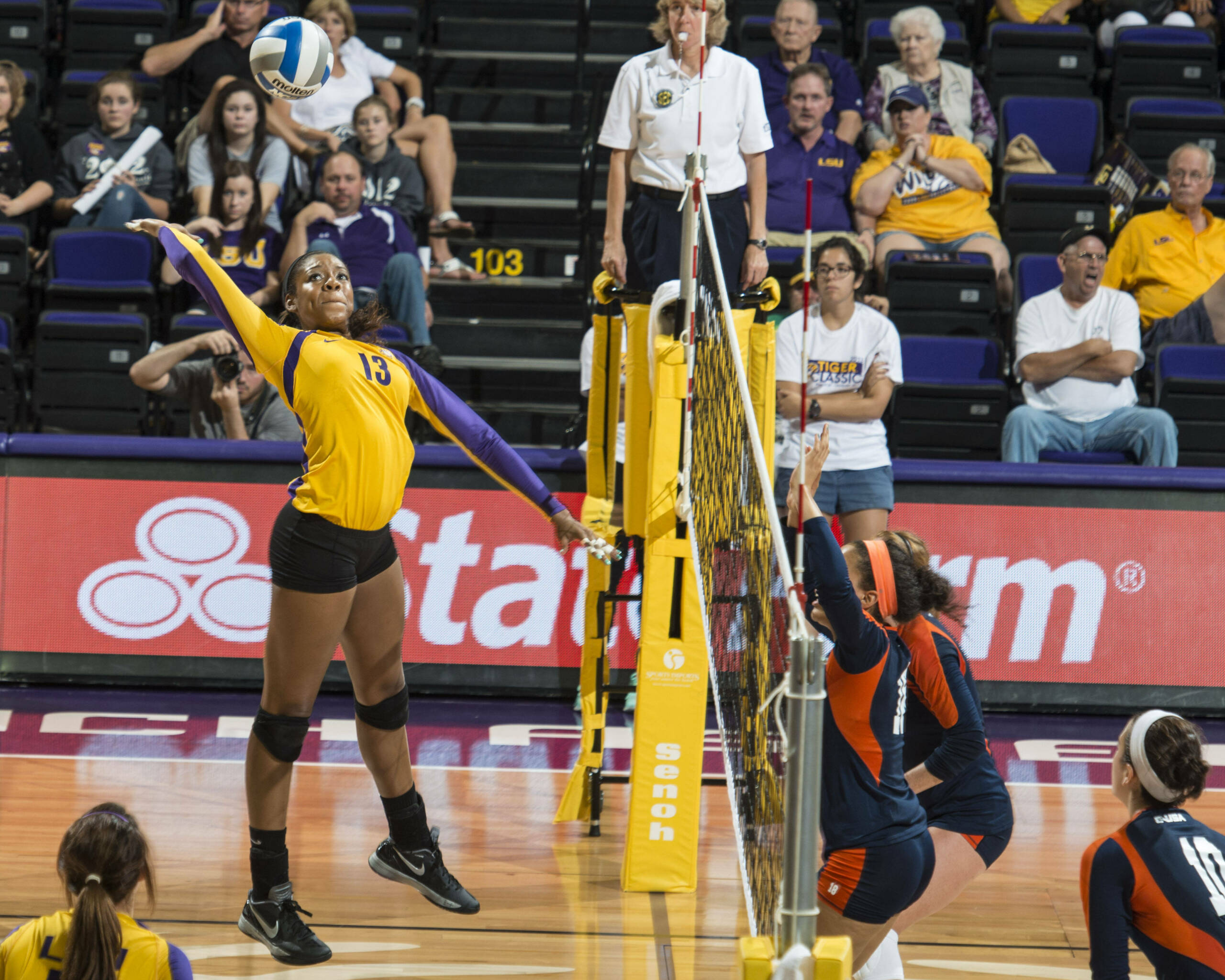 HOUSTON – Briana Holman, the reigning two-time SEC Freshman of the Week, connected for a career-high 17 kills on a .452 hitting percentage to enable the LSU volleyball team to fend off North Texas [25-27, 25-11, 25-13, 22-25, 16-14] during the opening match of the Flo Hyman Collegiate Cup Friday at the Athletics/Alumni Center on the University of Houston campus.

The Tigers (8-1) have won three of their four five-set decisions to start the 2013 season, while North Texas (6-7) was dealt its third consecutive loss. The last time LSU played three consecutive five setters was versus Alabama, Florida and South Carolina on Oct. 19-24-26, 2008.

“I think we escaped with this win, and I’m not very happy with how our team played,” head coach Fran Flory said. “I thought we played safe – we played not to lose instead of to win and create opportunities. This isn’t a team that can play that way. It’s another good lesson for our young team on how to manage matches and how to respond to teams that are fighting for their lives to get that significant win. It could have been a bad point for us, but I have credit our players for coming through to make some big plays when it counted the most in the fifth set.”

For Holman, it was her seventh straight match with double digit kills. The SEC’s leader in blocks per set also added a match-leading seven stuffs.

“Briana was really good for us, and we probably could have given her a few more swings,” Flory said. “She is going to be a terminating force for our offense. If we can pass well enough to get her the ball, there are not a lot of teams that can stop her unless we stop ourselves. I thought we stopped ourselves which would have allowed us to get out of this match in four sets.”

Malorie Pardo paced LSU’s offense to a .247 hitting ratio which included a pair of plus .400 efforts during sets two and three. She came away with 48 assists and 10 digs to claim her third double-double of the season. The Texas native also totaled a career-high five blocks.

Cati Leak smacked 12 kills and registered 10 digs en route to her team-leading sixth double dip of the season whereas Katie Lindelow notched nine kills, six digs, a career-high five aces and two blocks. She also was a perfect 26-for-26 in her reception attempts.

Making her first career start, Katarina Raicevic ripped a career-best seven kills on a .417 hitting clip to go along with five digs and two blocks.

Haley Smith corralled 14 digs to spark LSU’ back row defense. She has tallied 10-plus scoops in all five of her starts at the libero position and was a spotless 20-for-20 in her reception attempts.

UNT’s attack was led by Carnae Dillard’s 21 kills and 17 digs. Amy Henard distributed a match-high 52 assists and reeled in 11 digs to produce a double-double for the Mean Green. Shelby Tamura sprawled out for a match-leading 18 scoops as North Texas secured a 69-56 edge in the digs department.

“Offensively, Katarina played extremely well for us,” Flory said. “She did a great job of managing plays and having a nice calm demeanor for our team. It was a little glimpse of what she can do for us in the future. Katarina worked extra hard in practice this week. When our players are compelled and play with that desire in practice, every single time that next weekend they are the ones to make the big difference. Certainly, I’m proud of Katarina’s efforts.”

After splitting the first four sets, LSU used a 7-2 run to turn a 5-3 deficit into a 10-7 advantage in the fifth stanza. The Tigers forced North Texas into five hitting errors during that pivotal stretch fueled by a Khournti Fears solo block. After a timeout, the Mean Green fought back to even the ledger at 11-11 after consecutive hitting miscues from Holman and Leak. Holman provided a powerful sideout spike to vault LSU back ahead 13-12, and the Tigers wrapped up the 16-14 triumph on its second match point attempt via a Pardo solo block.

North Texas came out clicking on all cylinders and knocked 20 kills on a .349 hitting percentage during the opening set. The Mean Green also produced a healthy 72 sideout efficiency. The frame featured 12 ties and five lead changes. North Texas took its biggest lead at 18-15 after a block on Raicevic. Following a timeout, the Tigers ran off three straight points of their own capped by a Lindelow ace to knot the scoreboard at 18-18. LSU had a set-point opportunity at 25-24, but Dillard banged home two kills sandwiched between a block to hand the Mean Green a 27-25 victory.

LSU bounced back in a big way in set two as the Tigers buried 11 kills on 22 swings with only one error to compile a match-best .455 hitting clip. Ahead 12-8, the Tigers busted the stanza open and ripped off 10 straight points on a long Lindelow serving run aided by three aces. Holman popped two kills and teamed with Leak for a block during the run. LSU closed out the impressive 25-11 win on a Fears-Raicevic block.

Out of the locker room, the Tigers raced out to an 8-2 edge capped by a Raicevic ace to start the third set. LSU led wire-to-wire and cruised to the 25-13 victory. Holman and Leak teamed for eight of 12 kills, while the Tigers put together a stout 78 percent sideout efficiency.

North Texas was poised to force a winner-take-all fifth set. After 11 ties and three lead changes, the Mean Green crept out to an 18-15 lead in set four. The Tigers trimmed the deficit down to one point on three separate occasions, the latest at 23-22 on a Leak kill. North Texas responded with a sideout kill and forced Leak into a hitting error to take the 25-22 decision.

LSU continues day one action of the Flo Hyman Collegiate Cup and takes on Baylor in a SEC-Big 12 matchup. Friday’s first serve is on-tap for 4:30 p.m. from the Athletics/Alumni Center on the University of Houston campus. Live audio and live stats will be available for free inside the Geaux Zone at www.LSUsports.net/live.

“Baylor is a completely different team than the one we faced this morning,” Flory said. “They are bigger, more physical and play above the net. I would like to see a higher level of discipline in our blocking and a little more patience on offense. We didn’t really manage our side with the mentality we needed to. Those are all things that are within our control. There’s nothing that affects us at all to manage those three things. Baylor will have a nice game plan put together, and we’ll have to be ready to execute at a high level to be successful.”