by Caroline Downer
Inside the Huddle: Jarvis Landry +0 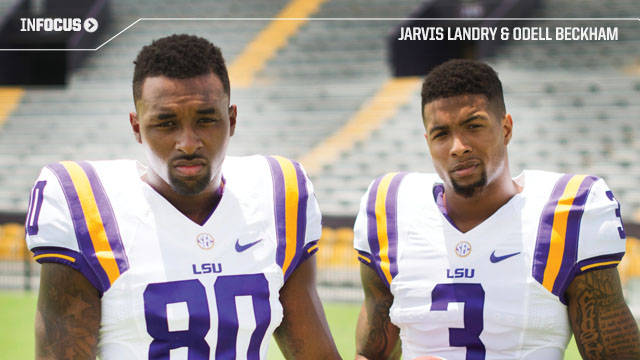 Beckham, Landry Thrive on Making Each Other Better

As the Tigers took the field against TCU for the first match-up of the season, friends Odell Beckham Jr. and Jarvis Landry achieved what they’d been waiting for since they were recruits. Storming the field side-by-side, the duo held starting positions together for the first time.

“When we stepped on the field together against TCU, we were finally about to do one of the things that we had always wanted to do,” Landry said, shaking his head. “For me, when we took the field together, we dominated. That was exactly what we talked about. It was a thing that we saw before it happened, but now that it’s happening, it’s crazy to put into words.”

When the pair met at a 7-on-7 tournament as recruits, they had mutual respect for each other and aspired to play on a championship team. They both knew and agreed that they needed to be on the same side of the field.

“He was the No. 1 receiver,” Beckham said of Landry. “So, I told him I wanted to play on the same team and on the same side of the ball. It’s like a dream come true.”

While it’s hard for the receiving tandem to pinpoint exactly when their friendship began, they know and admit their feelings of brotherhood toward each other. Their passion on the field and attitude off the field impacts the team in practice, in games and every time they are together.

“I think it’s our quirkiness,” Landry said with a nod of approval from Beckham. “On days when I’m wired up and serious, ‘OBJ’ will be funny. The team feeds off of that. We have a lot of leaders on the offensive side of the ball, and those guys do a great job of motivating the guys around them. I think they feed off of the confidence that we have, the confidence that any play is makeable. Once that trickles down to everyone, you have a tough offense there.”

What fuels these standouts is an unspoken competition between them. The two friends are with each other and push each other every day, and they know that each other’s success encourages the other to succeed as well.

“It’s a secret competition,” Landry said in a whisper. “We know, but we won’t say. I think that’s the thing that says a lot about our personalities, and how we respect one another. We thrive on getting ourselves better, but also getting the guys around us better. If he catches a one-hand pass, then I want to catch a one-hand pass. It’s the mentality that if you can do it, then I can do it too.”

Their close-knit relationship adds a dynamic to the offense, and they are grateful for the teammates they can call both friends and family.

“The whole team is part of our family,” Beckham said. “We have guys on the team that we’re really close with now, and you see them eight hours out of the day. You’re pretty much with them for half the day, and you develop a relationship with them.”

Both of the Louisiana natives hold strong relationships with their families and each other’s families as well.

“After I met Odell, his family definitely embraced me,” Landry said. “His dad and his mom both came to LSU, so they knew a lot of people. They knew the background and the tradition. Coming from a small town, I didn’t know much about LSU or the program or anything. His family really embraced me and really gave me an opportunity to learn about LSU.”

Landry and Beckham know that LSU’s close proximity to their supportive families in Convent, La., and New Orleans, La., add to both players’ strength, character and drive.

“Having Jarvis here and my family there, it’s definitely a lot easier than if they were across the country somewhere,” Beckham said. “To me, family is very important. My dad is really the one that’s kept me level-headed throughout this whole process.”

Although only juniors, both players made a tremendous impact on the team from the moment they signed with the Purple and Gold, and they continue to do so each day both on and off the field.

During their sophomore season, former player Russell Shepard pegged them as the “Fab Five,” including himself along with seniors Kadron Boone and James Wright. While the duo of Beckham and Landry itself doesn’t have a nickname, members of the team know Beckham as “OBJ” and Landry as “Juice.”

“(Former player) Josh Dworaczyk said that the energy and the life I brought to practice gave him a feeling that made him want to get better, and that he thought I was a fun person to be around,” “Juice” said, smiling. “The name just stuck with me through the team, and it started trickling through the fans.”

While the futures of both Beckham and “Juice” Landry hold great things, both players have remained humble by keeping their characters in sync and agreeing that giving back to the community, to LSU and to their families is always a priority.

“It’s definitely about giving back,” Landry said. “To whoever, to whatever, and whenever. That’s both of our dreams.”

The tandem’s friendship and support for each other is undeniable.

“They’re different guys, but they have many similarities,” head coach Les Miles said of Landry and Beckham. “They’re very committed to this team, and their work ethic is tremendous.  They recognize that their contribution is necessary for our football team’s success, and they’re giving it.  They’re good people.”

Within LSU’s multi-talented football team, two receivers stand out for their talent, passion and friendship. The two share big dreams for the future, just as they did when they were recruits. Regardless of who starts a game, who finishes, and who makes the biggest play of the night, Beckham and Landry will remain side-by-side fighting for the Tigers, just as they did stepping onto the field against TCU.