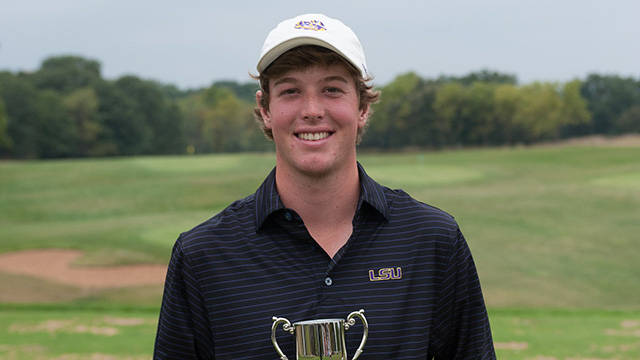 BURLINGTON, Iowa – The stage was set for a dramatic finish in Tuesday’s final round at the fifth-annual Golfweek Conference Challenge as LSU junior Stewart Jolly rolled in a 30-foot birdie putt on his final hole at the par-three seventh to claim a share of the individual championship in the event held this week at Spirit Hollow Golf Course.

Jolly battled playing partner James Newton of Central Arkansas for the individual crown for much of the day as they teed off on their final hole in a dead heat at 5-under par for the tournament.

With No. 7 playing at 135 yards, Jolly stuck a 9-iron about five feet short of the cup, but was left with about 30 feet for his birdie when the ball spun back toward the front edge of the green. His putt broke left and then back to the right at the cup as the ball disappeared into the cup for a birdie and 3-under par round of 69 and three-day total of 6-under par 210 after Tuesday’s final round.

Jolly knew he had finished one shot clear of Newton as the Central Arkansas sophomore made par on their final hole for a 2-under 70 on the day and 5-under 211 for the championship.

“I knew I was tied with (James Newton), so I thought if I made birdie I was probably going to win,” Jolly said. “When I made the putt, I thought it was for the win outright. It was exciting when it rolled in. I still knew that there were a bunch of guys still out there on the course, so I didn’t want to get my hopes up too much. I’m still happy to be able to earn that share of the win.”

After opening with back-to-back rounds of 1-over 73, Virginia Tech’s Scott Vincent turned in the round of the tournament with an 8-under 64 on Tuesday to finish as the co-medalist with Jolly at 6-under 210.

Jolly is off to a flying start in his junior season after tying for third place with a score of 5-under par 211 in LSU’s season opener at the Carpet Capital Collegiate Classic played Sept. 6-8 at The Farm Golf Club in Rocky Face, Ga. He is averaging a team-leading 70.16 strokes per round in six rounds played on the season.

“I’ve been hitting the ball really well for a while now, but I’ve just got so much more confidence in my putting now than I ever have before,” Jolly said. “I’ve been working really hard on my putting. That hard work now is starting to pay off. I’ve never putted this well in my life. I played well over the summer. Playing so well in stroke play at the U.S. Amateur really got my confidence up. I’m playing with a lot of confidence each time we go out there. I couldn’t have asked for much more.”

Jolly helped lead the Tigers into fifth place in the final team standings as they posted a team round of 4-under par 284 on Tuesday for a 54-hole score of 8-over par 872 at the Golfweek Conference Challenge.

After teeing off Tuesday with a 13-shot lead in the team race, the Oklahoma Sooners played the final round in 1-over 289 to claim a four-stroke victory over the Virginia Tech Hokies with a winning score of 7-under 857. Virginia Tech was the runner-up at 3-under 861, followed by Houston in third place at 2-over 866 and New Mexico in fourth place at 3-over 867.

Thompson and sophomore Zach Wright teamed with Jolly in leading the Tigers to a team score of 4-under 284 in the final round as they posted matching score of 1-under 71 on the afternoon. Thompson nearly cracked the Top 10 of the final leaderboard by tying for 13th place at even-par 216, while Wright moved into a tie for 63rd place at 15-over 231 in the final individual standings for the championship.

LSU freshman Brandon Pierce posted his second-straight round of 1-over par 73 during Tuesday’s action to finish his collegiate debut in a tie for 34th place at 6-over par 222 at the Golfweek Conference Challenge.

Just one week after opening his season with a tie for fifth place at the Carpet Capital Collegiate Classic, senior Smylie Kaufman posted a 2-over 74 in the final round to finish in 56th place at 11-over 227.

“It’s a great event,” said LSU head coach Chuck Winstead of the Golfweek Conference Challenge. “Golfweek and Spirit Hollow do a nice job with the event. It’s a great golf course. We want our guys to have the chance to play all around the country, and this was a great opportunity for them to do that. It’s important for our guys to see all parts of the country and get comfortable playing all types of courses.”

The Tigers will now break for three weeks before they play host to their only home tournament of the 2013-14 season with the fifth-annual David Toms Intercollegiate scheduled to run Oct. 5-6 at the University Club in Baton Rouge. LSU is the defending team champion and senior All-SEC performer Andrew Presley is the defending individual champion at the David Toms Intercollegiate.