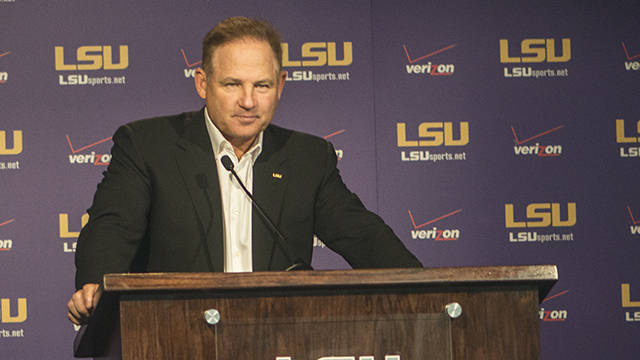 Video of Coach Miles’ opening statement and the full-stream of the weekly “Lunch with Les” show presented by Subway are now available free in the Geaux Zone.

On competition between other players …
“For us, it’s not really about the numbers. I think that the morale of this team has grown due to the guys who’ve sacrificed playing time or whatever it is. You see guys like Travin Dural and Travis Dickson. They come in and make plays for us on third downs. It goes to show that when we need other guys to step up, those guys are there.”

On opening SEC play …
“I think this year it’s not about the other team, and it’s not about who we’re playing against. It’s all about us. If we approach these games with a level head and with a mentality that we have to execute at a high level, it doesn’t matter who the other team is.”

On playing in a starting position …
“My goal was to contribute to the team as much as possible. We had a lot of people that entered the (NFL) draft early, and a hole in our defense had to be filled. I feel like our coach tried to make it a challenge of who was going to fill that hole.”

On improving game play …
“Every day, you have to come in and improve and work. I go watch film every day and try to find something to improve on. I feel like each game, I have to try to do something better than the last week and keep improving. At the end of the day, I’m trying to be one of the best, not just an average player.”

Coach Miles: We expect the home crowd will be very live for Auburn. Since I’ve been here some of those games have been very special.

On opening SEC play …
“It’s like the start of a new season for us. We got the beginning out of the way, and now we’re starting SEC play. It’s going to be a really exciting thing for us. Every SEC team is going to be physical, big and fast. It’s just like us. We’re just going to have to come to work and prepare.”