Jolly Tied for the Lead at Golfweek Challenge 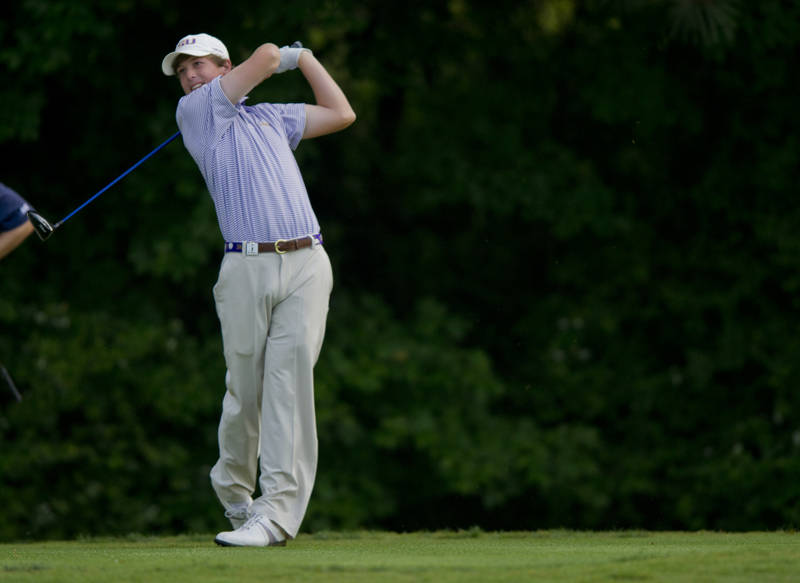 BURLINGTON, Iowa – LSU junior Stewart Jolly finds himself in the title chase for the second time in as many tournaments to start the 2013 fall season after firing a 3-under par 69 to move into a tie for first place on the leaderboard following Monday’s second round at the Golfweek Conference Challenge being played at Spirit Hollow Golf Course.

Jolly, who opened the tournament with an even-par round of 72 on Sunday, catapulted himself into a four-way tie for the lead at 3-under par 141 after 36 holes of the event.

He helped the Tigers improve their position by five spots in the team race as they posted a score of even-par 288 during Monday’s action to move into a four-way tie for fifth place in the 15-team field with a two-round total of 12-over par 588. LSU will tee off in the final round tied with Central Arkansas, Jacksonville State and Winthrop as the team looks to improve its position on the final day.

The Oklahoma Sooners have taken a commanding 13-shot lead in the race for the team title with just 18 holes to play after firing the best team round of the tournament at 10-under par 278 on Monday for their total at 8-under par 568 through two rounds. Houston trails the Sooners by 13 shots at 5-over 581, followed by New Mexico in third place at 6-over 582 and Virginia Tech at 7-over 583 heading into the final round.

Jolly is off to a lightning fast start to his junior season after tying for third place in LSU’s season opener at the Carpet Capital Collegiate Classic held Sept. 6-8 at The Farm Golf Club in Rocky Face, Ga.

Jolly will tee off in Tuesday’s final round in a four-way tie for the lead with Ball State’s Tyler Merkel, Central Arkansas’ James Newton and Oklahoma’s Beau Titsworth as the quartet holds a narrow one-shot lead for the individual crown. Arizona’s Alex McMahon, Winthrop’s Nick Eberhardt, Oklahoma’s Max McGreevy and Oklahoma’s Michael Schoolcraft follow in a tie for fifth place at 2-under par 142.

Jolly is now in contention to win his second career collegiate title after tying junior teammate Curtis Thompson for the tournament title at the 2012 Shoal Creek Intercollegiate last fall.

Thompson is also on the cusp of a top-10 finish at the Golfweek Conference Challenge this week after blistering Spirit Hollow Golf Course with a season-low 2-under par 70 to move himself 21 spots up the leaderboard into a tie for 16th place at 1-over par 145 for the tournament. Thompson is seeking his first Top 10 of his junior season after earning five in an All-American sophomore season in 2012-13.

Freshman Brandon Pierce posted his best career round in his debut tournament with the Tigers with a 1-over 73 during Monday’s action to move into a tie for 36th place overall at 5-over 149 through two rounds. Senior Smylie Kaufman added a 4-over 76 toward LSU’s team score to finish the day in a tie for 53rd place at 9-over 153 for the event.

Sophomore Zach Wright finished up the second day of competition in a tie for 69th place in the field at 16-over par 160, including his 5-under par 77 in the second round.

The Tigers are paired with Central Arkansas and Iowa in Tuesday’s final round and will tee off on holes Nos. 8-11 with a shotgun start set for 8:30 a.m. CT. Golfstat will provide the live scoring during the final round of the fifth-annual Golfweek Conference Challenge and can be found online at www.golfstat.com.