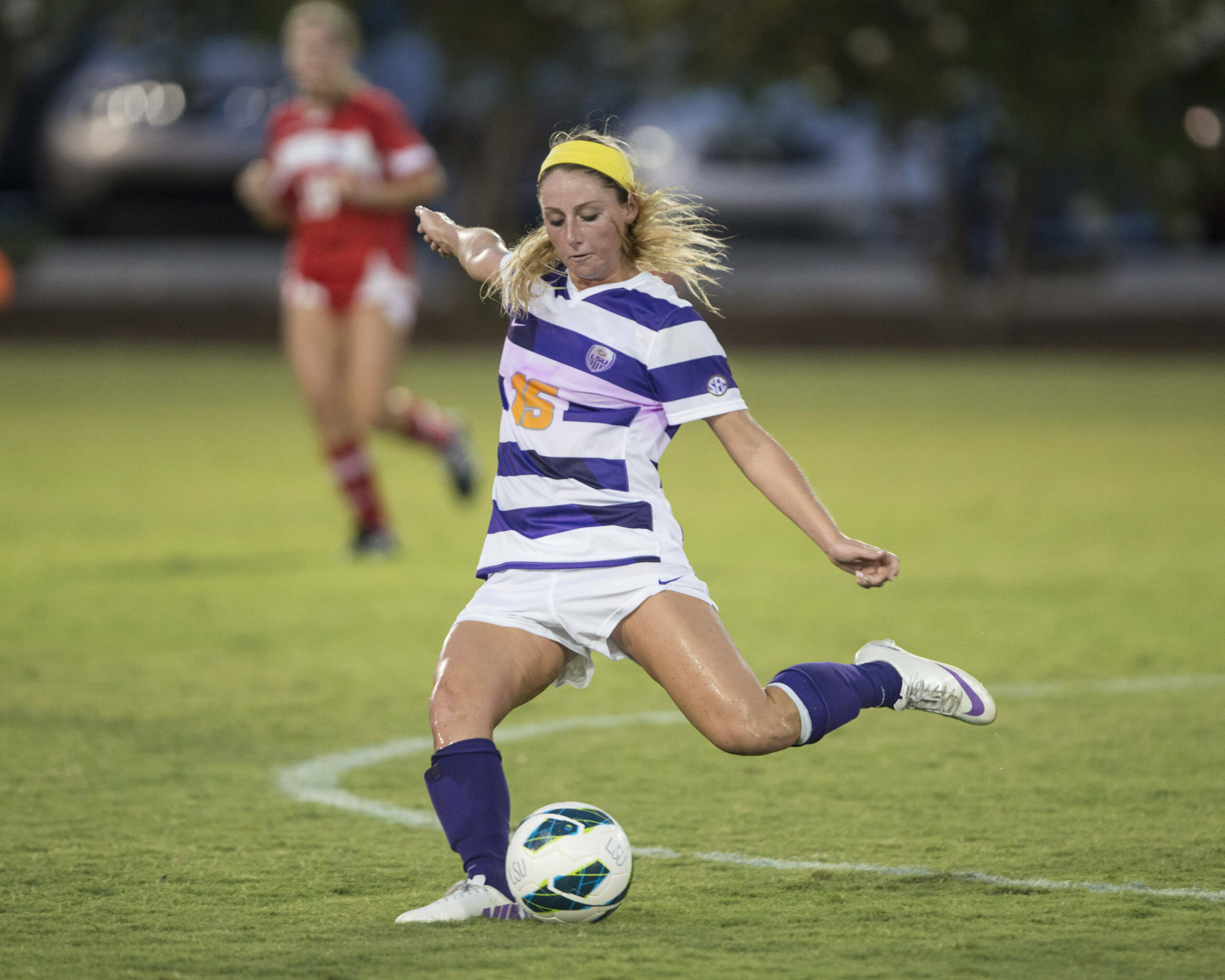 BATON ROUGE – The Tigers took advantage of one of their five corner kicks in the match in the 70th minute of play when senior Alex Ramsey‘s first career goal proved to be the game-winner as the LSU Soccer team took home a 1-0 victory over the Rice Owls in its non-conference finale on Sunday afternoon at the Rice Soccer Stadium.

After the initial service by freshman midfielder Emma Fletcher was cleared way, sophomore midfielder Heather Magee headed the ball back into the box creating a scramble in front of the net.

While standing near the left post, Ramsey found herself on the receiving end of Magee’s header as she chipped home the game-winner at the 69:24 mark for her first career goal in LSU’s 1-0 victory. Senior goalkeeper Megan Kinneman led the defensive effort down the stretch as she finished the match with six saves for the victory in LSU’s non-conference finale.

“It’s a big win for our team as we now look forward to SEC play next weekend,” said LSU head coach Brian Lee. “It was just one of those typical Sunday afternoon games on the road where you just have to fight for the full 90 minutes to grind out a result. That’s what we did today. I’m proud of our players for bouncing back from a tough game on Friday night to get the win this afternoon.”

Freshman Megan Lee nearly gave the Tigers an early lead in the ninth minute with her effort in pressuring Rice goalkeeper Amy Czyz. As Czyz attempted to put the ball back into play, Lee charged into the penalty area and leaped high into the air to deflect the ball off the right post before following with a shot into the side netting.

In a first half void of many chances by either side, the Owls came close to breaking the deadlock on the stroke of halftime on a scramble in the box that saw senior defender Hayley Williams fire a 10-yard strike in space directly in front of goal. Kinneman read it perfectly and charged off her line to defend as she deflected Williams’ shot out of danger as the half expired.

The Tigers threatened to break the scoreless deadlock early in the second half even before Ramsey scored the only goal of the match in the 70th minute of play.

Just three minutes into the second frame, the Tigers went on the offensive led by freshman striker Summer Clarke with a brilliant run into the box down the right side. Clarke played a square ball to sophomore winger Fernanda Pina running free in the middle of the area, but Pina’s one-time shot was saved brilliantly by Czyz diving to her right. Freshman Emma Fletcher followed with an eight-yard strike on the rebound, but Czyz was again up to the challenge as she leaped high into the air and punched the ball over the crossbar and out of play for a corner kick.

Clarke again led the charge in the 64th minute while linking with senior Nina Anderson in a two-on-three attack. Clarke played Anderson through the Rice back line, but Anderson’s sliding effort from 10 yards sailed just wide of the right post as she met Czyz charging off her line to defend the attack.

Clarke then came within inches of netting her third goal of the season in the 83rd minute following a poor goal kick by Czyz to put the ball back into play. Czyz mishit the goal kick that found the feet of Clarke open at the edge of the midfield circle. The Canadian international then sprinted past a Rice defender and pinged a shot off the crossbar from the top of the box as Czyz raced back to defend her own goal.

Kinneman also provided the defensive heroics in the dying minutes of regulation with the Tigers clinging to their 1-0 advantage as the Owls turned up the offensive pressure.

In the 88th minute, a failed clearance by the LSU defense found the feet of Rice’s junior midfielder Quinny Truong standing just outside the top of the box. Truong fired a curling left-footed strike that Kinneman denied initially, but was too hot for the Tiger goalkeeper to handle as it rolled toward the goal line. Kinneman raced back and slapped the ball out of play for a corner kick that the Owls would not convert.

It was one of six saves made by Kinneman on the afternoon as she kept her sixth clean sheet of the season while moving into sole possession of second place on LSU’s all-time list with her 16th career shutout in goal.

“It’s like a second season for our team now that we move into conference play,” Lee said. “The SEC has really taken a big step forward over the last couple of years as one of the top conferences in the country, so we’ll have to play with great effort each and every time we step onto the field to get the results we want. We have a great challenge right out of the gate playing at Vanderbilt next week.”

With the 2013 non-conference season now in the books, the Tigers will now begin Southeastern Conference play next weekend with a trip to Nashville, Tenn., to take on the Vanderbilt Commodores on Saturday night at 7 p.m. CT at the VU Soccer Complex in Nashville, Tenn. LSU scored a 1-0 overtime victory over the Commodores in Baton Rouge a season ago.