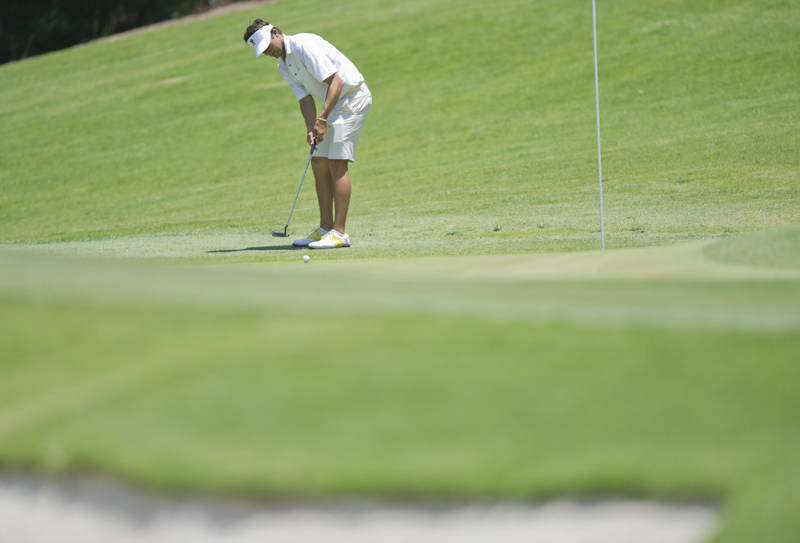 BATON ROUGE – The No. 9-ranked LSU Tigers are among 15 teams from 15 different conferences making the trip to Burlington, Iowa, this weekend as the University of Iowa will play host to the fifth-annual Golfweek Conference Challenge beginning with Sunday’s opening round at the par-72 layout at Spirit Hollow Golf Course.

This marks the first time that the Tigers will compete at the Golfweek Conference Challenge as the course will play to a par 72 and 7,301 yards for the three-day, 54-hole championship.

Sunday’s first round and Monday’s second round are scheduled to begin at 9 a.m. CT with tee times off of holes No. 1 and No. 10, while Tuesday’s final round is slated to start with a shotgun start at 8:30 a.m.

The Tigers are coming off a strong start to the 2013 fall season following a third-place team finish at the prestigious Carpet Capital Collegiate Classic held at The Farm Golf Club in Rocky Face, Ga., last weekend. LSU fired an impressive 8-under par 288 in Sunday’s final round to wrap up the event in third place of 15 teams at even-par 864 for the tournament.

The Tigers are the Southeastern Conference representative at one of the truly unique collegiate tournaments of the fall season as they look to build momentum at the start of the 2013-14 season.

The SEC owns an impressive winning streak at the Golfweek Conference Challenge after the Arkansas Razorbacks and Missouri Tigers have taken the title in each of the last two seasons. Arkansas fired a winning squad score of 5-under par 859 for the victory in 2011 before Missouri posted a winning total of 7-under par 857 to take home the team title from the event a season ago.

The Tigers are paired with New Mexico and Oklahoma during Sunday’s action and will tee off from the front nine beginning at 10:30 a.m. CT.

Returning to LSU’s lineup from the season-opening Carpet Capital Collegiate Classic are senior Smylie Kaufman, juniors Stewart Jolly and Curtis Thompson and sophomore Zach Wright, while freshman Brandon Pierce is set to make his collegiate debut with the Tigers at the Golfweek Conference Challenge this week after joining the program as one of the top recruits in the country for the Class of 2013.

Both  Jolly and Kaufman cracked the Top 5 for the final tournament leaderboard in the opener as Jolly fired a 5-under par 211 for third place and Kaufman carded a 2-under par 214 to tie for fifth place for 54 holes at the Carpet Capital Collegiate Classic. Their performance helped guide the Tigers to third place in the 15-team field for a strong start to the 2013 fall season.

Thompson tied for 23rd place and Wright tied for 48th place in their first action of the season to also help lead the team to a third-place finish at the Carpet Capital Collegiate Classic last weekend.

After competing at the Golfweek Conference Challenge this week, the Tigers will break for three weeks before returning home to play host to the fifth-annual David Toms Intercollegiate at the University Club in Baton Rouge on Oct. 5-6. LSU swept David Toms Intercollegiate titles a year ago as the Tigers won the team title and senior Andrew Presley took home the individual crown.