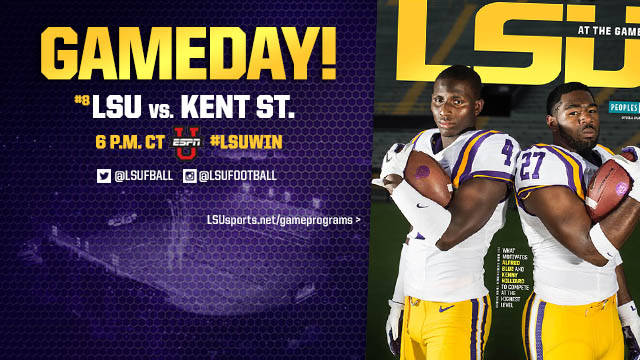 BATON ROUGE – LSU will get its final out-of-conference test on Saturday before stepping into Southeastern Conference play next week when the No. 8 Tigers host Kent State at 6 p.m. in Tiger Stadium.

The game will be televised nationally on ESPNU with Clay Matvick, Matt Stinchcomb and Dawn Davenport on the call. The game can also be heard on the LSU Sports Radio Network and in the Geaux Zone at www.LSUsports.net/live.

Kent State, members of the Mid-America Conference, will be making its first trip to Tiger Stadium. The Golden Flashes, who won a school-record 11 games last year and came within one victory of reaching the Orange Bowl, are 1-1 overall. Kent State beat Liberty, 17-10, to open the season and then dropped a 41-22 decision to Bowling Green last week.

It’s the first meeting between LSU and Kent State in football and the first time a MAC opponent has come to Tiger Stadium since 2002 when the Tigers beat Ben Roethlisberger and Miami (Ohio), 33-7.

“Kent State has a good team,” LSU coach Les Miles said this week. “They won 11 games last year, including a road win over Top 25 Rutgers so they understand what it takes to win away from home. They are going to come in here and play hard. They are very well coached and have a good scheme.”

Against the Golden Flashes, the Tigers will face a squad that returns 15 starters from a year ago, including a pair of 1,000-yard rushers in Dri Archer and Trayion Durham. Durham leads the Golden Flashes with 116 yards and one touchdown. Archer, who injured an ankle early in the first game of the season and sat out last week, is expected to see action against LSU.

Quarterback Colin Reardon has completed 64 percent of his passes for 358 yards and four scores to lead a Kent State offense that is averaging 19.5 points and 331.5 total yards (152.5 rushing, 179.0 passing) per game.

Defensively, the Golden Flashes are allowing 399 yards (126 rushing, 273 passing) per game and they are giving up 25.5 points a contest. Sophomore linebacker Matt Dellinger leads the team with 18 tackles, while defensive tackle Roosevelt Nix is among the most productive defenders in school history with 56.0 tackles for loss, 21.5 sacks and 10 forced fumbles.

“They are really good on defense,” Miles said. “They are very athletic and have some playmakers on that side of the ball. I am impressed with what I have seen on film from them.”

The Tigers will counter Kent State’s defense with an offense that is averaging 446.5 yards per game (174.5 rushing, 272.0 passing). Zach Mettenberger is off to the quickest start statistically for any quarterback in LSU history with six touchdown passes and 544 passing yards through two games.

Last week, Mettenberger threw for a school-record five TD passes in the win over UAB to run his record as a starter to 12-3.

Junior Terrence Magee leads the Tigers in rushing with 102 yards and a pair of touchdowns, while Alfred Blue has 97 yards, Kenny Hilliard 62 yards and a TD and Jeremy Hill with 50 yards and one touchdown.

Defensively, LSU has shown improvement over the first two weeks despite playing a very young group on that side of the ball. LSU has played eight true freshmen on defense and that trend is expected to continue against Kent State.

As a unit, LSU is allowing 22.0 points and 277.5 total yards (137.0 rushing, 140.5 passing) per game. Defensive end Jermauria Rasco leads the Tigers with 11 tackles and 1.5 sacks, while linebacker Lamin Barrow follows with nine tackles.

“We have had another good week of practice,” Miles said. We got a lot accomplished this week at practice now it’s a matter of taking it to the field on Saturday night. I think our guys understand that these are days that you cannot have back. There’s work to be done and they are not going to practice without a purpose, and I think that that is evident.”

After Saturday, LSU will play its third straight home game, hosting Auburn at 6:45 p.m. in Tiger Stadium on ESPN.