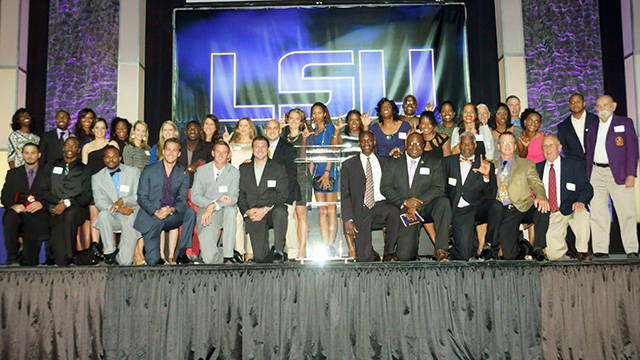 BATON ROUGE – The LSU Track & Field program held its fourth-annual Team Awards and Alumni Recognition Banquet on Thursday night at the Pete Maravich Assembly Center in which 14 student-athletes received awards for their performance in competition, in the classroom and in the community during the 2012-13 athletic season.

The LSU Track & Field Team Awards and Alumni Recognition Banquet has been established to not only recognize the current members of the program for their performance in the past year, but also honor the alumni who have laid the foundation of success still enjoyed by the program today.

Athletes, coaches, administrators, family and alumni were in attendance in celebration of the great history and tradition of the nation’s premier combined program in collegiate track and field.

Awards were presented to current and former members of the team for their outstanding performance during the 2012 outdoor, 2012 cross country, 2013 indoor and 2013 outdoor seasons while leading the Tigers and Lady Tigers in all aspects of the program.

Highlighting the festivities was the celebration of the 25th anniversary of the Lady Tigers winning the national championship at the 1988 NCAA Outdoor Track & Field Championships in Eugene, Ore.

“We enjoy the opportunity to host this event each year as we celebrate those athletes who have helped build the program we enjoy today,” said LSU head coach Dennis Shaver. “It was a very special night for us as we were able to welcome back so many from that 1988 team that holds such a special place in the history of our program. That was a tremendous team that deserves this type of recognition.

“This was also a special night for our program as we honored those Tigers and Lady Tigers of today who have made their mark on the program over the past year. Those who took home awards are deserving of such an honor as the leaders of our program today. We’re already preparing for 2014, and look forward to seeing who steps up to lead the program over the next year.”

The awards portion of the banquet proceeding was capped by seniors Damar Forbes and Kimberlyn Duncan taking home the Most Outstanding Performer of the Year awards.

Duncan was named the winner of the Most Outstanding Female Performer of the Year award for the third-straight season as she also claimed the honor as a sophomore in 2011 and as a junior in 2012.

Duncan, winner of The Bowerman as the top collegiate track and field athlete in the country in 2012, finished her brilliant collegiate career in 2013 while defending her NCAA Indoor and NCAA Outdoor championships in the 200-meter dash. She is the only sprinter in collegiate history – male or female – to sweep indoor and outdoor national championships in the event in three-straight seasons as she ended her career as a six-time NCAA champion in the event. Duncan was also the NCAA Outdoor bronze medalist in the 100-meter dash in 2013.

Forbes was presented The Glenn “Slats” Hardin Award honoring the Most Outstanding Male Performer of the Year after being crowned the NCAA Outdoor champion in the men’s long jump during the 2013 season.

Hardin is a true American track and field legend as he was the world’s premier 400-meter hurdler in the first half of the 20th century. He set the world record in the event three times during his career with his best time of 50.6 seconds standing as the world record for 19 years from 1934-53.

After winning a silver medal in the 400 hurdles at the 1932 Olympic Games in Los Angeles, Calif., Hardin won the gold medal at the infamous 1936 Olympic Games in Berlin, Germany. He remains the only LSU Track & Field athlete to win an Olympic gold medal in an individual event.

Forbes is a deserving recipient of The Glenn “Slats” Hardin Award this season after sweeping SEC Outdoor and NCAA Outdoor titles in the long jump, while also winning the SEC Outdoor crown and claiming All-America honors as the leadoff leg of LSU’s 4×100-meter relay team. He had previously won four SEC silver medals and four NCAA silver medals in the long jump during his career through the 2013 indoor season.

A Jamaican international, Forbes even jumped a lifetime personal best of 27 feet, ¾ inches during his senior season to finish as the No. 2-ranked performer on LSU’s all-time outdoor list in the men’s long jump.

In addition to his selection as the winner of The Glenn “Slats” Hardin Award, Forbes also won The Kenner Day Academic/Athletic Achievement Award and Men’s Most Outstanding Field Athlete Award for the event.

Both Duncan and Forbes ended their 2013 season by competing at the IAAF World Championships in Athletics held in Moscow, Russia, as Duncan competed for the United States in the women’s 200 meters and Forbes competed for Jamaica in the men’s long jump. Forbes advanced to the final in his second World Championships appearance, while Duncan raced in the semifinal in her championship debut.