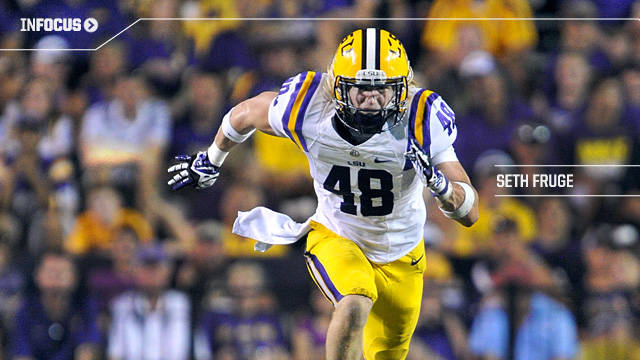 Seth Fruge is Always in Pursuit of Excellence

“I knew if I took the harder path, the path untraveled, that good things were going to happen,” said Seth Fruge, who has certainly stayed true to his words.

The redshirt senior linebacker/holder has done nothing less than look every challenge in the face during his time as a football player at Louisiana State University.

Upon graduating from Notre Dame High School in Crowley, La., people made their doubts clear to him. He was told he should accept the scholarship offers he received from multiple schools because he would not play if he went to LSU.

Despite the criticism, Fruge did not hesitate on his dream to play for LSU. He came to Baton Rouge with the mindset that he was going to work and do whatever it took to get on the field.

Fruge began his career at LSU as a walk-on linebacker. Peaking at 5’11” and listed at 186 pounds, he was seen as undersized for the defensive position. After working throughout the summer to come in as prepared a walk-on as possible, Fruge was able to make the scout team.

Early into fall camp of his freshman year, former LSU Special Teams Coordinator Joe Robinson spoke to Fruge about playing on special teams. From that point forward Fruge knew he needed to show everyone he was going to come in and work hard every single day, no matter the position.

“People are constantly putting you down, but I just took that as motivation to push through and go harder each day because I was going to do something they said could not be done,” Fruge said.

Fruge maintains his relationship with Graff, saying they just spoke to another last week. Graff told Fruge when they were teammates, “Just because something has not been done, does not mean it cannot be done. It is just there as an opportunity for someone to achieve it.”

Fruge’s unwavering determination has ultimately led him to where he is today.  As a fifth-year senior, Fruge is now on scholarship at LSU and a captain on special teams. He should see the field quite often this year. Not to mention he can be looked upon as one of the standout leaders on the team.

It may seem as though Fruge has played with the proverbial ‘chip on his shoulder.’ This, however, is far from the truth.

“It is the greatest honor to be seen as a captain and a leader on this team,” Fruge said. “I came here to contribute to the team however I could.”

Fruge’s biggest goal is to help the team win, and he is more than willing to do whatever is asked of him. He could easily look at what he has accomplished and recognize only himself for where he is today. However, he credits his teammates and coaches.

“Each year that I worked with the focus to help my team, it just got me further and further,” Fruge said. “I believe that’s why I’m where I am today as a captain and leader. I try to work to help the team rather than to help myself.”

Along with finding success on the football field, Fruge has used his work ethic to find success in the classroom. He is a three-time SEC Academic Honor Roll member (2010, 2011, 2012) and is “working on his fourth.”

Fruge has done so as a nutritional sciences major and biology minor. His focus outside of football has currently been in preparation for the Medical College Admission Test (MCAT). The skills he has acquired while balancing his on-and-off- the-field accomplishments will certainly carry Fruge through medical school and into his profession.

“The determination and work ethic I have learned through football has taught me to never give up. I can take that to medical school as well,” Fruge said.

Perseverance and an exceptional work ethic have brought him to where he is today. Fruge is now on scholarship and receiving playing time as a three-time SEC Academic Honor Roll member with hopes of medical school.

A great final football season and bright future are certainly ahead for Seth Fruge.