In Focus: Thunder and Lightning 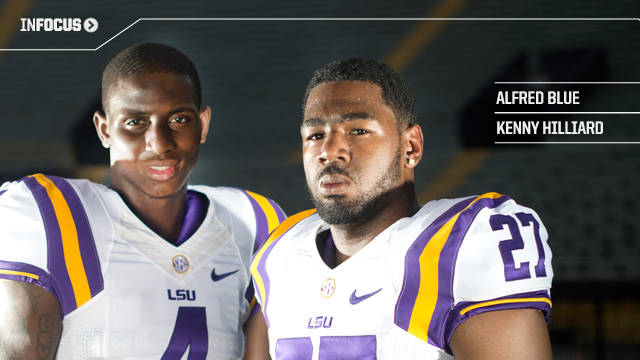 “Chance of rain – never.” These are the famous words spoken by Tiger Stadium public address announcer Dan Borne’ before every LSU home game. As the saying goes, “it never rains in Tiger Stadium.” While there might not be any rain, there has been plenty of thunder and lightning to go around these past few years.

LSU veteran running backs Alfred Blue and Kenny Hilliard are best known as “Thunder and Lightning” – nicknames they have earned due to their different playing styles. Blue, a senior from Boutte, Louisiana, is known for his speed and quickness, hence the “Lightning.” Hilliard, a junior from Patterson, Louisiana, is a bruiser at running back who punishes defenders with his strength, earning him the name of “Thunder.”

“I definitely think the names fit,” Blue said. “Kenny is the thunder guy because he’s big and physical and I’m faster so I’m more of a lightning guy.” Speaking further about his skill set, Blue went on to describe Hilliard as “a bruiser that gets down field and just makes defenders pay.” When asked about Blue’s strengths, Hilliard said, “he brings speed and that’s what we need. He can get around the edge and he can definitely get in between the tackles.”

Playing with current NFL running backs such as Stevan Ridley, Spencer Ware and Michael Ford while at LSU, Blue and Hilliard had to adjust to the new coaching style as freshmen by waiting for their number to be called. “My freshman year, I looked to Spencer, Michael and Alfred,” Hilliard said. “They all took me under their wing and brought me to where I am today. It’s something you have to go through your freshman or sophomore year. It’s about growing up. It’s a process and it made me the person I am today.”

After spending a few years in a system that utilizes multiple running backs, there is no lack of leadership among Blue and Hilliard, as they are now veteran leaders on the team. “Knowing that I’m the veteran, knowing that the guys are relying on me, I have to lead by example and get everyone rallied behind me and motivate them when they’re out there on the field to be just as great as me or better than me,” Blue said. “Once you get older and become a junior or senior, you start looking at things differently,” Hilliard added. “It gave me a humbling experience to go through my first two years because I was still a kid at the time. Now, you have to be about your business. The freshmen are looking up to me now to steer them the right way and that’s what I want to do.”

Blue is especially eager to start this season. Last season, he was the second leading rusher in the SEC through two games before going down with a season-ending knee injury, tearing his ACL in LSU’s third game against Idaho. “I didn’t know it was going to be a season-ending injury,” Blue said. “I knew something was wrong and figured it would take a couple of weeks.” After an MRI revealed he had suffered an ACL injury, Blue quickly realized his season had been cut short. “It was just devastating after the way I had started out the season. I was down for a while until I came out of surgery and I realized that I had to get back to work. You can’t get down on yourself. The past is the past and everything happens for a reason. I just embraced it and got after it with rehab.”

Blue is no stranger to hardships. In the fall of 2011 when he was a sophomore, his family home burned to the ground. “I just can’t worry about stuff like that,” Blue said. “You can’t change what happened – you just have to keep going forward. After the ACL surgery, it was the same thing. I just had to put it in the past and not be down about it. You just have to embrace it and move on and build from it.”

Suffering the same injury as Minnesota Vikings superstar Adrian Peterson, Blue says he uses Peterson’s comeback story as motivation. Peterson tore his ACL in the final game of the 2011 season and it became easy to doubt his chances of returning to his dominant form. Peterson silenced the critics and came back even stronger, winning the NFL’s Most Valuable Player award and finishing just nine yards shy of the all-time single-season rushing record last year. “Adrian is a great athlete and a great role model that I look up to,” Blue said. “That’s why I was eager to get this season started because I feel like I can do the same thing he did. I feel like I can show everybody in the world that I can come back, too, and come back stronger. I just want to take that doubt out of everyone’s mind. Once I get in the game, I’m just going to release it and run wild and do what I do best.”

A highly-touted four-star recruit coming out of Patterson High School, Hilliard is the all-time leading rusher in Louisiana high school history with 8,603 yards. Despite his success at running back in high school, Hilliard started his career at LSU mainly taking snaps at fullback. He earned more playing time at running back after his stellar three-touchdown performance against Georgia in the SEC Championship in 2011. “Throughout life, you have to be patient,” Hilliard said. “You just have to be ready when your name is called.”

Hilliard, the team’s second-leading rusher last season, says he is now more focused and ready to finish strong this season. Even more pressure was added to Hilliard last year as Blue went down with his season-ending injury and Hilliard’s daughters, Kambri and Korinne, were born. “I definitely felt like I had to step up,” Hilliard said. “With all of that happening, it took me off track and led me to have the season I had last year. I had a productive season, but I didn’t finish. This year, I’m not letting anything get in the way of what I have to do.”

Both Blue and Hilliard have high expectations for this team as they head into a new season. Blue, Ware and Ford all rushed for over 500 yards in 2011. That feat had not been accomplished at LSU since 1997. As for this current group of running backs, Blue does not see why this season should be any different. “With all of the talent that we have, as long as we push each other throughout the season, I feel like Kenny, Terrence Magee, Jeremy Hill, and myself could all rush for over 500 yards,” he said. When asked what his individual goals are for the season, Hilliard responded, “to help this team win a National Championship and win the SEC West and get to the SEC Championship and bring back home the trophy that we should have brought back my freshman year in 2011.”

The forecast for Saturday nights in Death Valley never calls for rain, but if we’re lucky, this season’s forecast calls for an abundance of thunder and lightning.