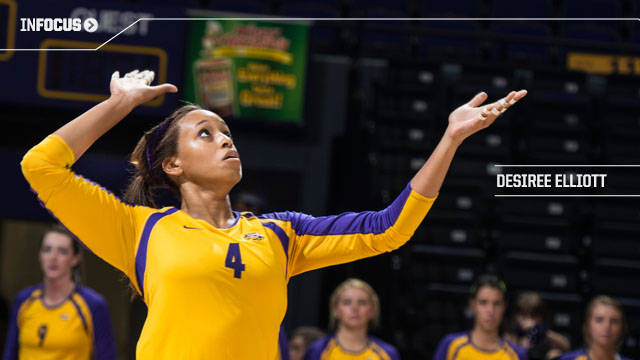 Senior Desiree Elliott is turning on her “Desi Mode” in hopes of leading the LSU volleyball team back to the NCAA Tournament with passion, energy, and attitude.

The middle blocker from Cypress, Texas lights up the entire Maravich Center after making a powerful kill or block with her shining smile and enthusiastic expressions.

“When I get in my ‘Desi Mode,’ I can get the team fired up,” Elliott said. “I think that’s my role for this team. We had a talk last year about everybody having a certain attribute that they bring to the team. Mine was the fire and positive energy. That is what I bring to this team no matter what the circumstances are.”

The Tigers’ lone senior has a certain attitude and passion that drives her to success, which landed her 2013 All-SEC Preseason Team honors, 2011 All-SEC Second Team recognition and the 2010 SEC Freshman of the Year award. This season, Elliott is already recording big accomplishments. In the season-opening Tiger Classic two weeks ago against Texas-San Antonio, she became the 20th player in LSU’s program to reach 1,000 career kills.

After a 12-17 record in 2012, the team’s theme for this year is ‘Earn This’. Along with her team, Elliott stays motivated to compete for the SEC West title and make it back to the NCAA tournament.

“It starts the moment you put the LSU jersey on,” Elliott said. “Whatever you do is 100 percent, and we expect to go far in the tournament. We are earning whatever we want to get out of the season, and I think that is what the ‘Earn This’ mentality is all about.”

Not only does Elliott have a burning passion for volleyball, but also a sincere heart for children and the LSU community. Elliott and the Tigers are heavily involved in children’s clinics. Her number one goal is to see the children smiling and having fun.

“Kids have a certain innocence about them,” Elliott said. “If a kid laughs or comes up to hug you, it will brighten your day. Just to see a kid upset because of his or her situation is a damper on your heart.”

Each year, the team’s seniors select a cause to support, and this season the team is partnering with St. Vincent de Paul to help children and underprivileged families. Items ranging from children’s clothes and shoes along with baby supplies and toys for the “Geaux Kids” program can be donated during every home match at the Maravich Center.

“My mom grew up in this area, and she knows what it feels like to come from an underprivileged family,” Elliott said. “I just want to make sure that the team and community knows that the LSU Tiger family is huge and some families need our help. I want the LSU Tiger family to reach out to the struggling kids.”

The “Desi Mode” goes further than the volleyball court; it carries on in the community as well.

Elliott will leave LSU after her senior season not only as a decorated middle blocker, but also as an encouraging and passionate leader making a difference for her team on the court and in the LSU community.