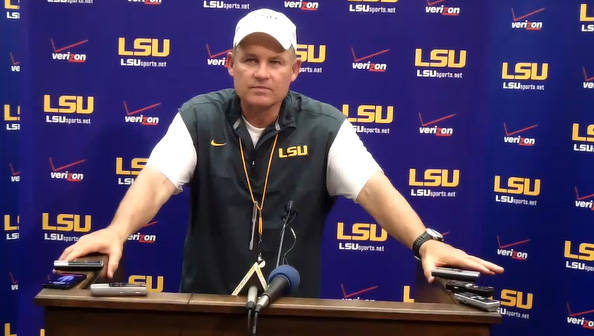 BATON ROUGE – LSU continued to prepare for its final non-conference game before heading into the meat of its Southeastern Conference schedule on Wednesday as the eighth-ranked Tigers practiced for just over two hours here at the Charles McClendon Practice Facility.

LSU, winners of a Football Bowl Subdivision record 43 straight regular season non-conference games, hosts Kent State of the Mid-America Conference at 6 p.m. on Saturday in Tiger Stadium. The game will be televised on ESPNU for the second straight week.

LSU, which has won 27 consecutive games in the month of September dating back to the 2006 season, is 2-0 overall following last week’s 56-17 win over UAB.

Kent State, which came up one game shy of reaching the Orange Bowl a year ago, is 1-1 overall after last week’s 41-22 setback to Bowling Green in its MAC opener. This will be the first meeting between LSU and Kent State in football.

“The practice week is going pretty well,” LSU coach Les Miles said after the workout. “I like the tempo of practice. We’re getting a lot accomplished – offense, defense and special teams. I think our guys understand that these are days that you cannot have back. There’s work to be done and they are not going to practice without a purpose, and I think that that is evident.”

The Tigers have used this week to correct mistakes on both sides of the ball, in particular on defense, where a young LSU team allowed 17 second quarter points against UAB last Saturday. LSU returned just three starters on defense from a year ago, but the Tigers have held their first two opponents to less than 300 yards of total offense.

“You can’t make a mistake on game day because those cost you points,” Miles said. “As simple as it was, there’s an attention to detail that must be taken in a game – you don’t make those mistakes. Each game plan has its own nuances and little differences. I think there’s some of that in this game plan, but the reality is that yes, they recognize that they can play better.”

Offensively, the Tigers have been nearly flawless in their first two games, racking up an average of nearly 450 yards per contest while scoring a total of 93 points. Zach Mettenberger is off to the best start statistically for any quarterback in school history with six passing TDs and 533 passing yards.

Mettenberger, who wasn’t sacked last week, has been aided by an offensive line that has played very well over the first two games of the season and a pair of junior receivers in Jarvis Landry and Odell Beckham Jr., who have combined to catch 23 passes with six going for touchdowns.

“I think the [offensive] line is really coming,” Miles said. “I see technique work; I see better footwork. I don’t think they are there yet, but I think each guy is really putting an effort forward.”

“I think it (offensive line play) will be a major factor in obviously both ways you move the football – the run and the pass. They are protecting better. They’re coming and frankly that’s what we need. We need to be prepared to play our very best football against Kent State and thereafter, improve some more and be ready for the next opponent.”

The Tigers will hold a light workout on Thursday followed by a walk through on Friday afternoon.