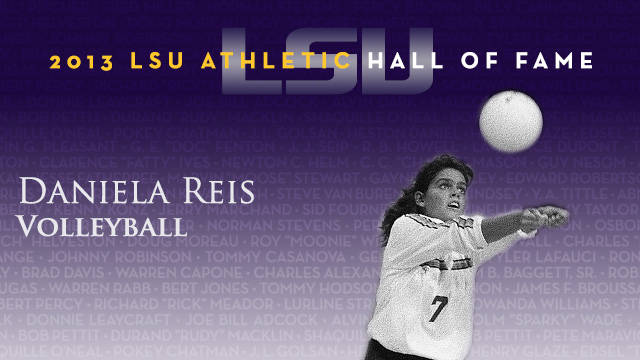 Editor’s Note: This is the fifth in a series of features profiling the six members of the 2013 LSU Athletic Hall of Fame induction class. The inductees are diver Ashley Culpepper-Gluck, gymnast Amy McClosky-McGinley, pitcher Kurt Ainsworth, men’s basketball player Frank Brian, volleyball setter Dani Reis and men’s basketball coach Dale Brown. They will be formally inducted into the Hall of Fame at 7 p.m. on Friday, Sept. 13 in the Pete Maravich Assembly Center.

When Dani Reis began attending LSU, she had no plans to play volleyball. Now, 24 years later, she is the first player in program history to be inducted into the LSU Athletic Hall of Fame.

“Having the first volleyball student-athlete inducted is something that we have worked really hard to try to accomplish,” LSU volleyball coach Fran Flory said. “I’m very proud that it’s Dani Reis. I don’t think that there is a better person to be the first because she was such a balanced and great student-athlete here.”

Reis, a Brazil native, made a name for herself as the finest setter in program history. She earned three AVCA All-American selections in 1990, 1991 and 1992. Reis also guided the Tigers to three SEC regular season championships, three SEC Tournament titles and back-to-back NCAA Final Fours in 1990 and 1991.

Reis left an indelible mark on the record books. Her 6,379 career assists are still the SEC and LSU record, ranking ninth in NCAA history. Her 1,527 career digs are also still an LSU record, and rank 12th in SEC history, while her 254 service aces are second in school history and fourth in SEC history.

Despite her accomplishments, Reis was surprised to learn she was being inducted into the Hall of Fame.

“I received a call from Coach Flory,” Reis recalled. “She said the Athletic Director was going to call, and he had a message for me. That was a call I’ll never forget.”

It was only fitting for Flory, an assistant coach during Reis’ career, to inform her of the honor. She made an immense impact on Reis, both on the court and in life, and Reis remains thankful.

“Fran is a wonderful human being, somebody I would trust my kid’s life with,” asserted Reis. “She pushed me to my limit every day in practice and in every game. She never let me think for a second I had reached my full potential and could relax.”

Reis chose to attend LSU by fate. When her father returned home from a business trip in the United States, he asked her if she would be interested in participating in an English program for foreigners at an American university. They began calling different universities but did not have any luck until they got in contact with LSU.

“The deadlines to enroll had ended and nobody would take me,” she said. “Then we got a call from LSU saying they had a cancellation and would accept my enrollment, but I had to leave in 48 hours.”

Reis packed her bags, said goodbye to her family and friends, and embarked on a journey that would become far more exciting than she had dared to dream.

When Reis arrived, she learned that LSU had a volleyball team and one of the players, Monica Freitas, was also from Brazil. Even though it was not during the season, Freitas invited Reis to play a pick-up match with the team. LSU head coach Scott Luster researched Reis and, after discovering she was a great player, immediately offered her a scholarship.

Although it was hard to leave her family for four years, their support helped validate Reis’ decision to pursue a degree from LSU.

“My parents were the biggest motivators,” Reis said. “They wanted me to work on my degree, learn a second language, experience another culture, and start my adult life in a very independent way while I kept doing what I loved the most in life, which was to play volleyball.”

In addition to her parents’ support and encouragement, Reis’ younger sister, Luciana (Lu), joined her on the team the next year. Lu is Reis’ only sibling, and the two have always been best friends.

“I can’t even start to describe how important it was having Lu with me through my college years,” she said. “Having her by my side on and off the court made everything much easier. Missing home wasn’t so tough having her there, that’s for sure! And she was the one passing all the perfect balls for me to do a good job setting them.”

LSU saw its first trip to the Final Four in 1990. A year later, the Tigers opened the season 12-0 with 10 sweeps, which included a sweep of No. 17 Texas. But two nights later in the SEC opener, the team dropped a five-set heartbreaker at Florida. LSU knew Florida was a good team, but they did not give the game the respect it deserved. Reis recalls that memory vividly.

“Texas was the big monster,” Reis remembered. “We had never had any trouble beating Florida before, so I think we went to that game knowing they had a good team, it would probably be a tough match but that we would beat them in the end. Big mistake.”

Reis found this loss unacceptable. She was the first one in the gym figuring how to fix their mistakes. Her leadership and work ethic inspired the team to work harder to attain their goal of excellence on the court. The loss proved to be the turning point for the team.

After 19 straight wins, the Tigers found themselves one win away from their second straight trip to the Final Four. For the fourth time of the season and the third time in four weeks, LSU would take on the Gators.

Despite winning the SEC Tournament championship in three sets, the third by a 15-0 score, it wouldn’t be easy this time. In fact, it would take a career effort from Reis. But as she did so often, Reis rose to the occasion. By the time it was over, Reis had set a school record with 82 assists, 43 of them to Monique Adams, who also set a school record for kills. But more importantly, LSU won in four sets and returned to the Final Four. For Reis, it wouldn’t have been possible without the early setback of losing to Florida.

“Thinking back, that was the best thing it could have happened to our team,” said Reis. “We knew we were good but if we wanted to make it back to the Final Four, we would have to work harder than ever, we had to own it, and we did.”

Twenty-four years later, Reis still considers many of her teammates among her best friends, and LSU remains her home away from home. She returns to campus often, and she has sent her daughters to LSU volleyball camps.

“Nyla [Shepherd] and I have kept best friends,” said Reis. “She’s my family and lucky enough she lives in Houston where Lu lives, so every time I visit Lu, I get to see Nyla as well. Same for Dana [Castillo], Julie [Stempel], Tonya [Johnson], Kelli [Schaff], Jenny [LaGrange] and Fran, of course. They all live in my heart and I try to keep in touch as much as I can.”

Reis enjoyed her tenure playing volleyball at LSU, and many of volleyball’s lessons help her to this day, both in her personal and professional life.

“Volleyball helped in every way possible,” Reis said. “Confidence, focus, balance, charisma, ethics, respect, leadership, teamwork, knowing how to deal with stressful situations, how to make people trust you and get on board with you, and also understanding when it’s necessary to push your limits to reach results.”

Reis was one of the first, and arguably one of the best, players to be offensive as a setter in all six rotations. This made her incredibly productive at scoring and elevated her skill above other college players.

“She had an uncanny ability to score from anywhere on the court at any point,” Flory commented. “We argued that she wasn’t just the best setter, she was one of the best hitters in the country, even though she really wasn’t hitting. Beyond her own ability to score, Dani’s understanding of the game was beyond what most setters of that era were and most setters that I’ve ever coached was. I think Dani Reis changed college volleyball.”