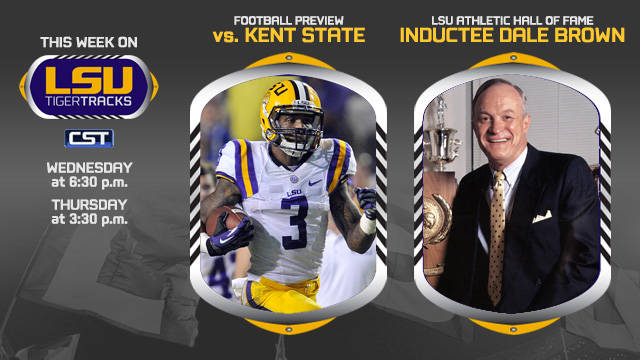 BATON ROUGE — This week’s edition of LSU Tiger Tracks, a program highlighting various aspects of the university and its athletic department, can be seen at 6:30 p.m. Wednesday and at 3:30 p.m. Thursday on Cox Sports Television.

LSU Tiger Tracks begins with a preview by correspondent Garrett Walvoord of Saturday’s football game in Tiger Stadium, as the eighth-ranked Tigers take on Kent State at 6 p.m.

The show continues with a visit to the studio from legendary men’s basketball coach Dale Brown, who will be inducted into the LSU Athletic Hall of Fame on Friday night.

Brown took over a struggling LSU men’s basketball program in 1972 and built it into a consistent winner that played in front of sell-out crowds in the Pete Maravich Assembly Center. He led the Tigers to Final Four appearances in 1981 and 1986, along with two other NCAA Elite Eight appearances (1980, 1987) and one more Sweet 16 berth (1979).