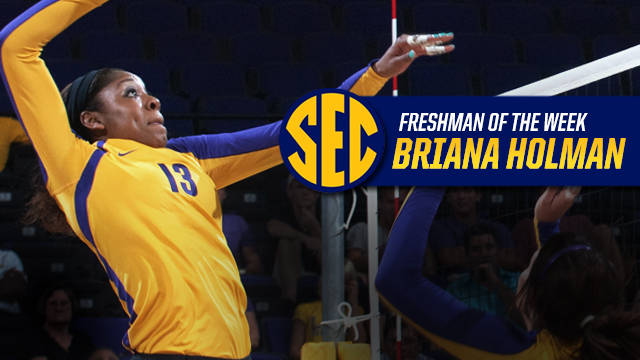 BIRMINGHAM, Ala. – LSU middle blocker Briana Holman has picked up the SEC’s Freshman of the Week award Monday as announced by the league office. For Holman, it’s her first career weekly award from the SEC.

“Certainly, we’re extremely proud of Briana,” head coach Fran Flory said. “She was outstanding in all facets of the game and continues to develop as an amazing physical force for our team. There are times when she makes things look so easy out there on the floor. For her to perform the way she has through six matches has been remarkable starting point for her career. If Briana continues to work hard, she is in store for a memorable freshman season.”

Holman secured Rice Invitational MVP status where she racked up 3.90 kills per set on a staggering .508 hitting percentage playing only three rotations. She also registered 1.50 blocks per set to vault her way to the top spot in the SEC rankings.

Holman hammered 15 kills to match a career-high and secured 10 blocks against Rice, the Conference USA preseason favorite. The 10 blocks is the top single-match mark in 2013 among SEC players. She also was the first player since former All-American Brittnee Cooper against Denver during the 2009 season to secure a double-double in kills and blocks.

LSU heads into the second leg of its three-weekend road swing with a pair of matches against Miami, who is receiving votes in the latest edition of the AVCA Top 25 poll. Friday’s first serve is on-tap for 6 p.m. CT followed by a 4:30 p.m. CT opening serve on Saturday. Both matches will have live audio and live stats available for free inside the Geaux Zone at www.LSUsports.net/live.