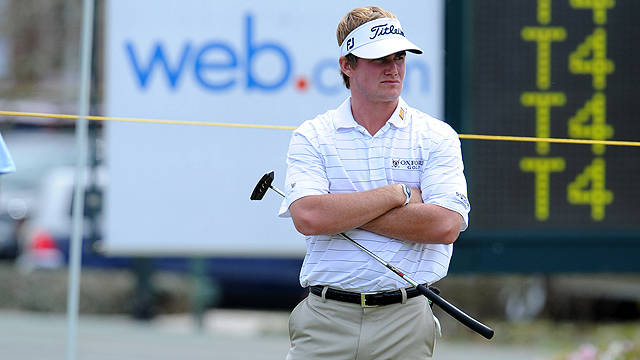 BATON ROUGE – While earning a pair of top-five finishes in the each of the first two Web.com Tour Finals tournaments, LSU Tiger great and former NCAA Champion John Peterson has now secured his PGA Tour card for the 2013-14 season as he will compete with now exempt status for the first time in his career as a professional golfer.

Peterson will join fellow Tiger great David Toms as two members of the LSU Men’s Golf program who will compete as fully exempt members of the PGA Tour during the 2013-14 season.

“It’s just a big relief,” Peterson said of earning his PGA Tour card for the first time in his career. “I didn’t have the greatest start to my pro career. It took me a little longer to get to this point, but I’ve got it and now it will be time to go out there and compete against the best week in and week out. I look forward to representing LSU on the PGA Tour.”

While not claiming any status on the PGA Tour during his two-year professional career, Peterson has enjoyed his share of success in Tour events. Peterson was nearly crowned the U.S. Open champion a year ago while tying for fourth place at the 2012 U.S. Open Championship at The Olympic Club in San Francisco, Calif., for his first career top-10 major finish in his major championship debut. He also made the cut in his debut at The Masters Tournament held earlier this season at Augusta National Golf Club in Augusta, Ga.

The Web.com Tour Finals has brought together the Top 75 money earners on the final Web.com Tour Money List of the regular season and the players finishing Nos. 126-200 on the PGA Tour’s FedEx Cup points list for a series of four full-field stroke play tournaments for 50 PGA Tour cards granting exemption status for the 2013-14 campaign.

The Web.com Tour Finals are set to wrap up on the weekend of Sept. 26-29 at the Web.com Tour Championship being held at TPC Sawgrass’ Valley Course in Ponte Vedra Beach, Fla.