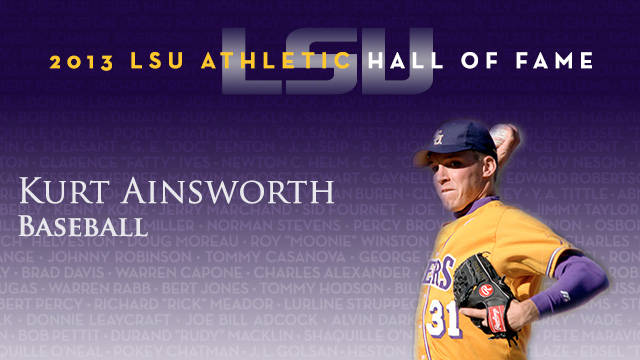 Editor’s Note:  This is the third in a series of features profiling the six members of the 2013 LSU Athletic Hall of Fame induction class. The inductees are diver Ashley Culpepper-Gluck, gymnast Amy McClosky-McGinley, pitcher Kurt Ainsworth, men’s basketball player Frank Brian, volleyball setter Dani Reis and men’s basketball coach Dale Brown. They will be formally inducted into the Hall of Fame at 7 p.m. on Friday, Sept. 13 in the Pete Maravich Assembly Center.

A middle infielder and pitcher during his senior year at Catholic High School in Baton Rouge, right-hander Kurt Ainsworth didn’t receive a lot of scholarship offers from big-time college baseball programs. That didn’t deter him from continuing on the path to his ultimate goal – a Major League Baseball career.

“I always wanted to play at LSU, but I wasn’t very highly recruited out of high school,” Ainsworth explained. “The schools that were recruiting me were much smaller than LSU, so all it took was the offer from (former LSU coach) Skip Bertman to be a preferred walk-on and be part of the team. I figured if I was going to play in the big leagues, which was my dream, I would have to be good enough to play at LSU.  I was advised by many people and coaches to go to a smaller university so I could play, but I was determined to play at LSU.”

Ainsworth entered LSU in the fall of 1996, and he was redshirted during his freshman season as the Tigers captured the 1997 College World Series title. An elbow injury required him in the summer of ’97 to undergo “Tommy John” surgery, a highly invasive procedure where his ulnar collateral ligament was reconstructed.

The surgery left Ainsworth’s career at a crossroads.

“It was extremely tough and put things in perspective for me,” Ainsworth said. “I had even made the initial decision to quit baseball and not have the surgery, because I hadn’t heard of many players returning from Tommy John surgery.  After a meeting with Coach Bertman, who told me that he believed I could come back, I totally changed my mindset and put everything I could into my rehab with our trainer at the time, Shawn Eddy.

“My new goal was to beat the normal recovery timelines, and I did by pitching in a game in only six months. It now takes pitchers a full 12 months before they can pitch in games. I had some great teammates and coaches at LSU who were very supportive and gave me a lot of confidence after my surgery.”

Ainsworth credits Bertman with giving him tremendous inspiration to persevere.

“Coach Bertman is the best motivator I have even been around and was the most knowledgeable coach that I have ever played for,” Ainsworth said. “I still find myself using some of his stories and sayings to motivate employees, or even my kids. He wasn’t afraid to give out some tough love which has really helped me throughout the years. I was never intimidated by another coach after I left LSU, which was a huge benefit, because I watched numerous players end their careers not being able to handle criticism from coaches.”

Ainsworth pitched on a limited basis for the Tigers in 1998, making six relief appearances as he worked to recover from the elbow surgery. He continued to gain strength in his arm over the summer, and by the fall of 1998, it became evident his diligent recovery efforts had paid off.

“Going into the 1999 season at LSU I was just hoping to make the travel roster and to contribute to the team’s success,” Ainsworth explained, “but after the fall workouts I could tell that I was ready for a good season.”

In fact, Ainsworth enjoyed a phenomenal ’99 season, earning first-team All-America honors with a 13-6 record, a 3.45 ERA in 130.1 innings and 157 strikeouts, the fourth-highest single-season total in LSU history. He led the Tigers to the NCAA Baton Rouge Regional title in Alex Box Stadium, outdueling future Major Leaguer Ben Sheets of Northeast Louisiana (now UL-Monroe) in the opener and firing a complete-game shutout against East Carolina in the championship contest.

“It was the best feeling in the world making the victory lap around Alex Box after that game,” Ainsworth recalled. “I didn’t care about the upcoming (MLB) draft, because I loved LSU so much and just wanted to win.  I had always dreamed of that moment when I could take that victory lap and celebrate with my teammates at ‘The Box.’”

Just a couple of days later, Ainsworth was the 24th overall selection in the MLB Draft by the San Francisco Giants, becoming the first pitcher who had undergone Tommy John surgery to be selected in the first round.

Ainsworth quickly worked his way through the Giants’ farm system and made his Major League debut on September 5, 2001 against the Arizona Diamondbacks. He pitched in four seasons for the Giants and Baltimore Orioles before retiring from baseball in 2004 after a series of injuries. His career, though brief, included significant highlights – San Francisco teammate Barry Bonds slugged an MLB-record 73 home runs in 2001 and the Giants won the 2002 National League pennant and played in the World Series against the Anaheim Angels.

“Ever since I was a young boy, my ultimate dream was to play in the Major Leagues,” Ainsworth said. “Fulfilling that dream was special, but I put so much pressure on myself to succeed that I never fully allowed myself to enjoy the experience while it was happening. I do have some great memories from playing in the big leagues, but injuries really made the last few years tough.”

While still in the minor leagues, Ainsworth was invited to join the 2000 United States Olympic baseball squad, coached by legendary Los Angeles Dodgers manager Tommy Lasorda. Ainsworth helped lead the U.S. to the gold medal in Sydney, Australia, defeating The Netherlands and Australia in his starting outings.

“Playing for Team USA in the Olympics is hard to describe,” Ainsworth explained. “It is different than playing for a college team or a pro team where your fans are the only ones rooting for you. When you play for Team USA, the entire country is pulling for you.  That provides motivation and an extreme pressure to win.

“We had a great group of players on that 2000 Olympic team to go with a great motivator in Tommy Lasorda as our manager, and we truly believed we were the best and that we were going to win the gold medal.  Having a gold medal placed around my neck and then listening to our National Anthem is something I will never forget.”

Ainsworth’s remarkable baseball career featuring a CWS title, an Olympic gold medal and a Major League World Series is the product of a number of influences, including those of his family. His older brother, Kevin, was a starting outfielder on LSU’s 1994 College World Series team, and the brothers were lovingly supported by their parents, Oliver and Sandy.

“Kevin had an impact on my career at a younger age when I was a bat boy for several of his teams, and we spent numerous hours practicing together at the house,” Ainsworth recalled. “By the time he was at LSU, my mind was already made up that I wanted to be a big leaguer and that I was going to play at LSU. Kevin was always supportive of my career and was my biggest fan.

Today, Ainsworth and his wife, Angie, are raising four children ranging in ages from 11 to three years old, and, as a founding partner in the Baton Rouge-based company, Marucci Sports, he is immersed in parental and professional obligations.

“Marucci Sports is in a position to do some big things in the sporting goods world not only with baseball bats, but also with other equipment and training,” Ainsworth explained. “We’ve recently overtaken Louisville Slugger as the No. 1-used wood bat in the Major Leagues, which is a huge statement since Louisville Slugger is over 100 years old.  My goals are to continue to work with the rest of our team in order to create the best baseball brand in the world and then move on to other sports.  While building Marucci Sports, it’s also important for me to spend as much time as possible with my wife and four kids.”

Ainsworth, who celebrates his 35th birthday this week, has accomplished much in a relatively short period of time. His selection as a member of the LSU Athletic Hall of Fame sits at the top of his impressive list of achievements.

“It is a great honor to be inducted into the Hall of Fame,” Ainsworth said. “LSU has always been a big part of my life, and I take a lot of pride in the university.  I have been very fortunate in my career, but this is the biggest award I have ever received.  To be listed alongside the other members of the LSU Athletic Hall of Fame is almost surreal.”