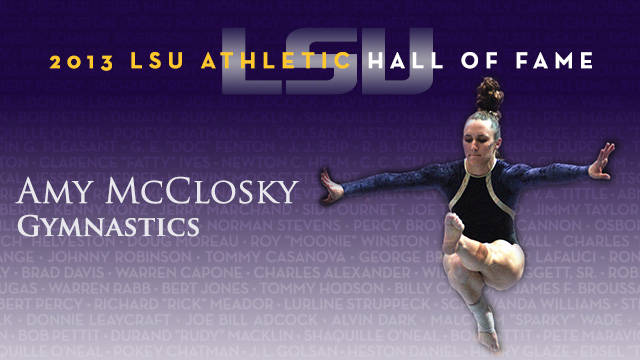 Editor’s Note: This is the second in a series of features profiling the six members of the 2013 LSU Athletic Hall of Fame induction class. The inductees are diver Ashley Culpepper-Gluck, gymnast Amy McClosky-McGinley, pitcher Kurt Ainsworth, men’s basketball player Frank Brian, volleyball setter Dani Reis and men’s basketball coach Dale Brown. They will be formally inducted into the Hall of Fame at 7 p.m. on Friday, Sept. 13 in the Pete Maravich Assembly Center.

Her eyes fixed on the balance beam, and everything else faded into the background. Her mind was solely concentrated on the task at hand: getting up on the beam and performing a flawless routine.

It was a windy, crisp day in Baton Rouge on March 15, 1996, and inside the Maravich Center it was busy and loud, filled with cheering from fans and music for another team’s gymnast during her floor exercise routine.

None of it mattered. In Amy McClosky’s mind, only two things existed: the balance beam and herself.

She did what she was always able to do, something that LSU coach D-D Breaux still marvels at to this day. She forced all fear of failure and of falling off that four-inch-wide beam out of her mind. Instead, she set her mind on dominating the routine while it played itself out in her thoughts.

She saluted the judge and locked in completely on her goal. McClosky mounted the beam with ease. First up in her routine was a front flip, and she nailed it. Next came her leap combination, and again she performed it without a single wobble. Once she moved to the end of the beam it was time for her series, which consisted of a back handspring and three straight back layouts that would carry her all the way to the other end of the beam. It is a difficult series to perform, and few other gymnasts across the country performed it at the time, and no one does a four-flip series now.

Without hesitation she executed each flip, and when she looked up again she knew she had nailed it.

All that was left was a few dance elements and then her dismount. With a cool, calm presence McClosky danced her way into position for her dismount. She exhaled once and leapt.

When her feet hit the mat and the roar of the crowd came rushing into her ears she knew she had done it, something never before accomplished in LSU gymnastics history. She knew she had completed an absolutely flawless beam routine.

A minute later the scores from the judges flashed and confirmed it. A perfect 10.000 across the board. Her teammates and coaches surrounded her, nearly hugging the life out of her.

Fast forward 17 years in the future, and Dr. Amy McClosky-McGinley still has that ability to focus her mind on the task at hand, blocking out would-be obstacles with the greatest of ease.

She is a devoted wife and mother to twin four-year-old daughters, and she is an Emergency Medical Physician at MedStar Union Memorial Hospital in Baltimore, Md.

“I work in a busy ER where we see 60,000 patients a year, many of which are facing life-threatening illnesses and in critical condition,” she said.

When someone enters the emergency room McClosky uses the same intense focus and determination she had as a gymnast to provide the utmost care for her patient.

“It’s a very high-stress situation when someone is actually dying,” McClosky said, “and just to eliminate all the emotion and focus on what you need to do to save the patient is very similar to that experience on the balance beam. It really is.”

All the success McClosky-McGinley has had in her life does not come as a shock to Breaux.

McClosky-McGinley was a stellar gymnast at LSU. She earned three All-America awards, captured the 1998 Southeastern Conference balance beam title and left LSU as the all-time winningest performer on beam with 15 career titles in that event. To this day she still ranks among the best in school history in total individual titles after finishing with 32 in her four-year career.

All the success in competition was not enough for McClosky; she wanted more. She wanted to become a doctor, to use her gifts to help others.

Upon graduation from LSU in 1999, McClosky enrolled in the Tulane University School of Medicine, where she earned her Doctor of Medicine in 2004.

“Those four years on the gymnastics team prepared me for going into medical school, surviving medical school and now juggling life as a working mom,” McClosky said. “Finding a balance is so important, and my time at LSU helped me learn how to do that.”

While she was establishing her medical career, McClosky was not left with much time to visit her alma mater. In fact, because of her demanding schedule she has only made a couple visits in the 15 years since she led LSU to the NCAA Championships meet as a senior in 1998.

Now, she can hardly wait to step foot on the campus she loves and receive one of the highest honors a student-athlete can earn – a spot in the LSU Athletic Hall of Fame.

“It is such an honor to get this award,” she said. “I just can’t believe it is happening. I am super excited to come down and see LSU again. The campus is so beautiful, and I miss it so much.”

When Breaux talked about McClosky-McGinley’s return to campus, she couldn’t help but think back on all that Amy has achieved since the Rockwall, Texas native stepped foot on campus as a freshman.

“Amy was just so focused and determined, and with everything she did she wanted to be meticulous and perfect,” Breaux said. “She does a fabulous job being a mother, a wife and a professional, and I’m just really proud and in awe of what she has accomplished.”

With her focused determination McClosky-McGinley has done much more than score the first perfect 10 on beam in LSU history; she has lived a life of accomplishments whose number continues to grow.