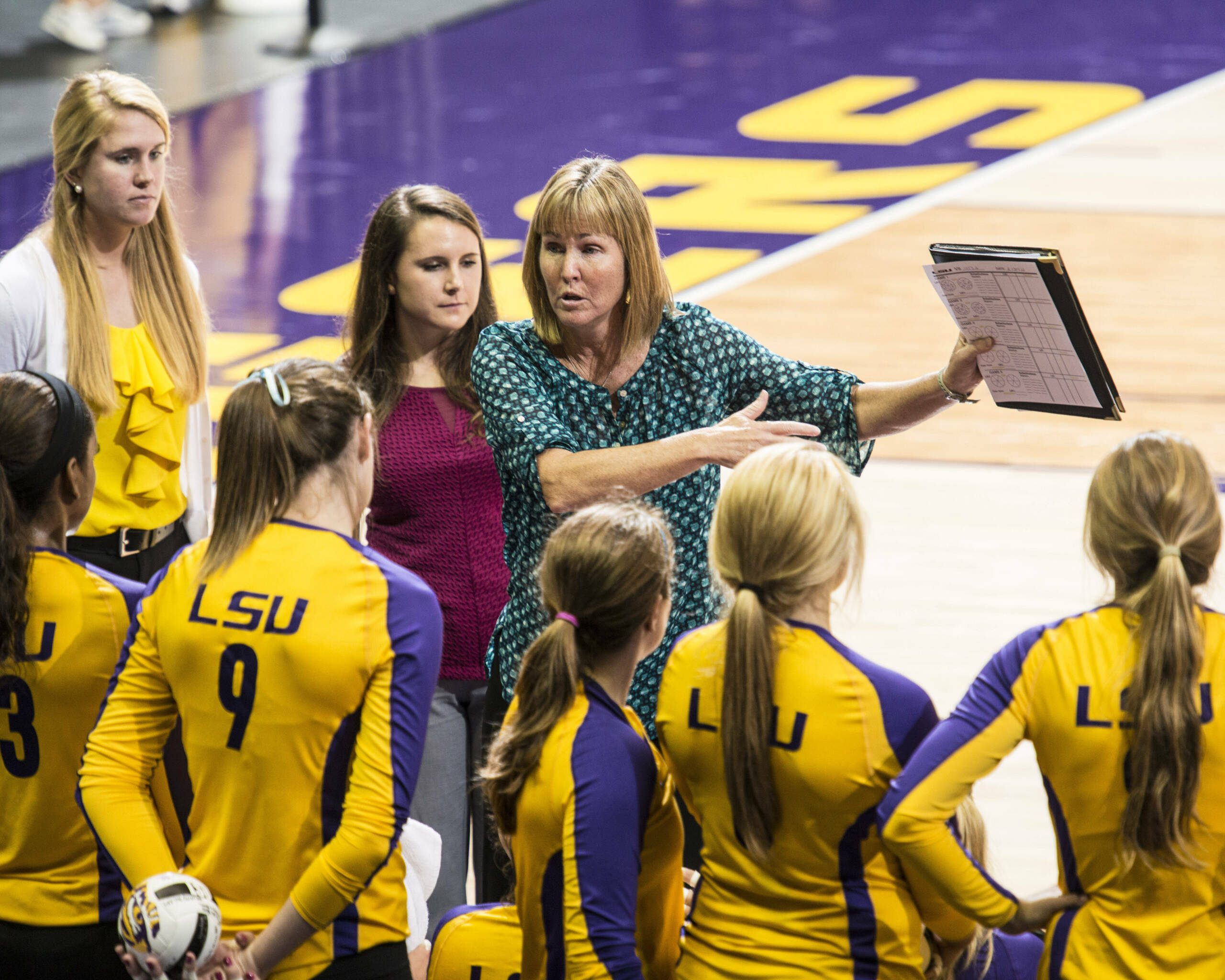 HOUSTON – The LSU volleyball team turned in a strong defensive performance with 13 blocks and held Texas A&M Corpus Christi to a paltry .086 hitting percentage during a 3-0 sweep [25-16, 25-22, 25-20] Saturday at Tudor Fieldhouse during the first match of day two at the Rice Invitational.

LSU (5-0) collected its second consecutive sweep and improved to 5-0 on the season for the first time since 2010. The Tigers have now won both all-time meetings with Texas A&M Corpus Christi (1-4).

“I was extremely proud of our blocking effort especially early in the match to set the tone,” head coach Fran Flory said. “Our front row changed the complexion of the match. We were able to answer behind the line as well. Texas A&M Corpus Christi is a hard team to play because they dig a lot of balls. Our hitters have a tendency to get frustrated in that situation. I’m happy with the poise and composure that our team was able to maintain. We did a great job of seizing the opportunities when we had them.”

Cati Leak totaled eight kills and two digs over her two sets of action. She had her streak of four consecutive double-doubles to start the 2013 season come to a close. Khourtni Fears notched five kills and five blocks, while Madi Mahaffey registered a team-high six blocks highlighted by three solo stuffs.

LSU’s back row was superb and produced a stout 68 percent sideout efficiency for the match. Making her first career start at libero, Haley Smith sprawled out for 16 digs and added two assists. Katie Lindelow totaled 13 digs, four kills and two blocks from the outside hitter spot.

“Today was a great step for Haley Smith,” Flory said. “She had a great week in practice, and her performance in this match was a testament to playing like you practice. Haley prepared extremely well, and the proof is in the stats. To have 16 digs in a three-set match is outstanding. I thought she served and passed at a high level as well. She made a big statement and showed that she wants to wear that different color jersey.”

“It has been important to us to establish what we want to accomplish during these first couple of weeks of the season,” Smith said. “We’re not looking past any matches, and we’re trying to play each point one at a time. The front row was very disciplined with their blocks in this match, and it makes it very easy to dig the ball. I think Coach (Flory) has a lot of confidence in this team. We have a lot of depth, and today was my turn to be in the libero position. Everyone can accomplish their goals no matter what position they are put in.”

LSU led wire-to-wire during the first set as the Tigers buried a .333 hitting clip and converted on 15-of-17 in the sideout department. The Tigers surged ahead 11-5 after consecutive kills from Pardo and Fears. The Islanders got as close as 13-9, but LSU fired back with eight of the next 12 points to race out a 21-13 advantage. During the run, the Tigers got kills from Fears, Holman and Leak in addition to forcing Texas A&M Corpus Christi into three hitting errors. LSU closed out the 25-16 triumph on Holman’s third spike of the frame.

The two teams split the first 24 points of set two and exchanged the lead five times before the Tigers notched a trio of blocks all involving Mahaffey to surge out to a 17-12 lead. Texas A&M Corpus Christi charged back to get within two points on two occasions, the latest at 21-19. Holman belted a key sideout kill for the Tigers, and Mahaffey ended a long rally to secure the 25-22 win.

Ahead 15-13 during the third set, LSU rode Holman’s right arm to three quick kills to extend its lead to a 19-13 margin. The Islanders rallied with five consecutive points of their own to make it 19-18. After a LSU timeout, the Tigers forced Texas A&M Corpus Christi into a service error and a pair of hitting miscues to go back up by four points at 22-18. Leak hammered home two kills coupled with another Islander attacking error to close out the sweep by a 25-20 margin. Holman was a spotless six-for-six as the Tigers popped a .300 hitting percentage.

“Briana’s connection with Malorie is getting better and better with each match that passes,” Flory said. “I’m sure if you ask Briana, she probably feels that she didn’t play that well because she didn’t have the big and physical kills. I thought she hit some shots today that are not defendable. She went over the top, into the corners and to the back line. When she can do that, she’s awfully difficult to defend. We’re hopeful that this match can be a big step in her maturation.”

LSU faces off with tournament host Rice to conclude the Rice Invitational. First serve is slated for 7 p.m. from Tudor Fieldhouse. Live audio and live stats will be available for free inside the Geaux Zone at www.LSUsports.net/live.

“Rice is always a tough opponent for us to play,” Flory said. “We have a great deal of respect for their coaching staff and their players. We understand that we will have to execute against a very tough game plan. They run a fast offense with a deceptive setter. Our goal is to serve-and-pass tough, and get them out-of-system as much as possible. This is going to be a great much for us playing against an opponent in their home gym.”