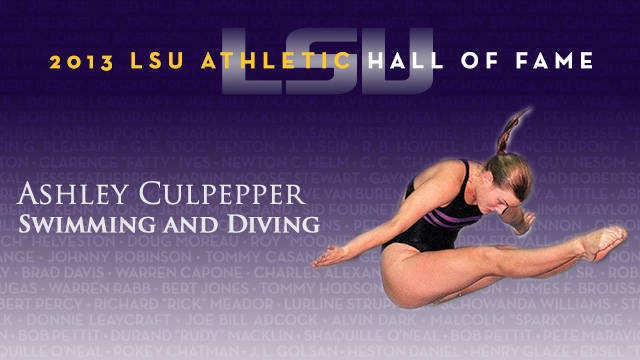 Editor’s Note:  This is the first in a series of features profiling the six members of the 2013 LSU Athletic Hall of Fame induction class. The inductees are diver Ashley Culpepper-Gluck, gymnast Amy McClosky-McGinley, pitcher Kurt Ainsworth, men’s basketball player Frank Brian, volleyball setter Dani Reis and men’s basketball coach Dale Brown. They will be formally inducted into the Hall of Fame at 7 p.m. on Friday, Sept. 13 in the Maravich Center.

The most dominant diver in the history of the LSU Swimming and Diving program will take her place among the best when Ashley Culpepper-Gluck is inducted into the LSU Athletic Hall of Fame on Friday.

Culpepper-Gluck, who competed for the Tigers from 1996-2001, is the first member of the women’s swimming and diving team to be inducted into the Hall of Fame.

“It was a surprise and an extremely huge honor to be inducted into the Hall of Fame especially to be the first woman swimmer or diver to be inducted,” Culpepper-Gluck said. “I’m in amazing company with some of LSU’s best, and it’s an incredible honor. My whole family is so excited and it’s very humbling.”

In 2000, Culpepper-Gluck won the NCAA title in the 3-meter diving event and was named the NCAA Diver of the Year. In addition, she was named the 2000 SEC Diver of the Year after winning the SEC title in platform diving. During her time at LSU, she earned 11 All-America awards, which included six first-team honors. In her final season, she was a silver medalist on the platform and bronze medalist in the one-meter event at the NCAA meet.

After her junior year, Culpepper-Gluck went on to the U.S. Olympic Trials where she qualified to be an alternate on the 2000 United States Olympic Team.

A four-time high school All-American and a 1996 state champion from Austin, Texas, once Culpepper-Gluck stepped onto LSU’s campus she knew she was at home.

“I took quite a few recruiting trips but my trip to LSU was something I could never forget,” she said. “We sat out in a monsoon with 80,000 people in Tiger Stadium to watch LSU play Mississippi State. I knew at that point it was where I wanted to go. When you walk on campus as an LSU athlete you get a very different feel from just a regular student. As soon as someone knows that you’re an athlete they want to know all about you. I was just a diver and they still cared.”

While diving is seen as an individual sport, she gives credit for her success to her coaches and teammates. During Culpepper-Gluck’s time at LSU, former Tiger diving coach Scott Reich won two SEC Diving Coach of the year awards and one NCAA Diving Coach of the Year award.

“Our coaching staff at the time was also second to none,” Culpepper-Gluck said. “Scott Reich had an incredible resume’ and he can also make you do things and want to do things that you never thought you were capable of. He has a psychological hold on his divers’ heads and knows what to do to make them tick. I really appreciated that from him as well. He knew I needed something different than my teammates needed, and he could always make you feel like you could accomplish anything.”

Culpepper-Gluck said Reich treated every student-athlete the same no matter their previous accomplishments. She believes that attitude not only helped her reach her full potential but also allowed her teammates to achieve their goals.

During her Culpepper-Gluck’s LSU career, she and her diving teammates combined for 27 All-America Honors, including six First-Team All-America accolades. She knows that her success and the success of her teammates came from the competition they engaged in every day at practice.

“We had such a successful team that it was almost a competition every day at practice in the pool,” she said. “It really elevates you to a totally new level of sport when you have such a successful group of people that always push you. I can’t just take the success that I had for myself because there were so many other people that went into it. There were no days off, especially that year that I ended up winning the NCAA title.”

While she never competed professionally, Culpepper-Gluck left LSU and the sport at an all-time high.

“I was OK walking away at that point and I had gotten everything I could out of the sport,” she said. “It was much more fulfilling to walk away from the sport when you were at the top of your game.”

As one of four national champions in the history of the women’s swimming and diving program, Culpepper-Gluck will never forget the moment she won her national title on the 3-meter springboard.

“There was a lot of work involved in leading up to the point of winning a national championship,” she said. “When you are standing up on the podium and you finally achieve your goals the feeling is pretty indescribable.”