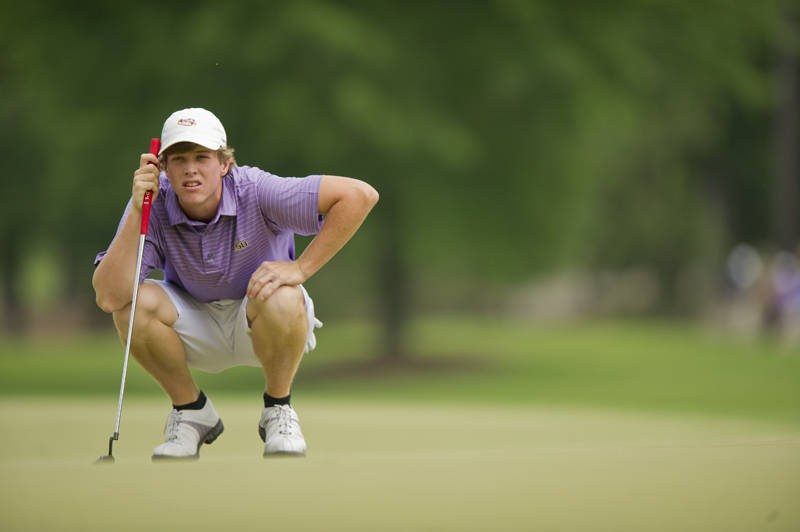 ROCKY FACE, Ga. – Junior Stewart Jolly fired an even-par 72 in his opening round of the 2013 fall season to guide the No. 9-ranked LSU men’s golf team into a tie for sixth place overall with a team score of 9-over par 297 on the first day of competition at the 25th-annual Carpet Capital Collegiate Classic played Friday at The Farm Golf Club.

Jolly cracked the Top 10 of the leaderboard in a tie for 10th place with six other golfers while posting a team-best even-par 72 in the opening round of the championship.

The Tigers wrapped up the day in a tie for sixth place with Kennesaw State with matching scores of 9-over par 297 as they find themselves 17 shots off the pace set by the Georgia Tech Yellow Jackets.

Georgia Tech was the only squad in the 14-team field to break par during Friday’s action with a team score of 8-under par 280 to sprint out to a 10-shot lead over North Carolina in second place with two rounds to go for the championship. The Tar Heels posted a team score of 2-over 290, followed by Georgia in third place at 3-over 291, Clemson in fourth place at 6-over 294 and North Florida in fifth place at 7-over 295.

Three Yellow Jackets find themselves among the top three of the leaderboard after the first day as All-American Ollie Schniederjans fired a 5-under 67 to grab a three-shot lead over North Carolina’s Bailey Patrick. Also breaking par for the Yellow Jackets were Anders Albertson and Richy Werenski, who fired matching scores of 2-under 70 to finish the day in a tie for third place.

Kaufman posted a 2-over 74 in his opening round of the 2013 fall season to finish the day in a tie for 23rd place, while Thompson followed in a tie for 33rd place at 3-over 75 and Presley added a 4-over 76 toward the total to tie for 43rd place on the leaderboard. Wright rounded out the scoring for the Tigers with a 5-over 77 to tie for 49th place on Friday afternoon.

The Tigers are paired with Clemson and North Florida in Saturday’s second round at the 25th-annual Carpet Capital Collegiate Classic as they will tee off from the front nine beginning at 8:50 a.m. CT. Live scoring for both the second and third rounds of the tournament will be provided by Golfstat and can be found online at www.golfstat.com.