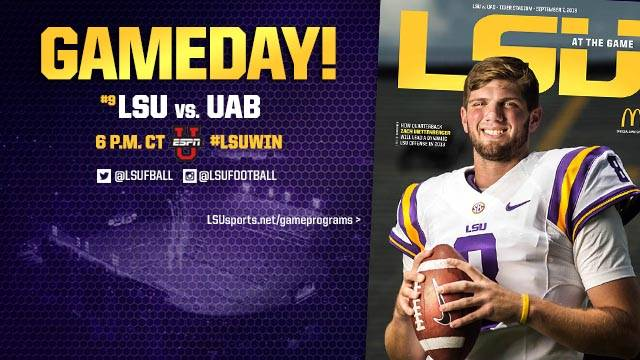 BATON ROUGE — A week after opening the season in impressive fashion with a 37-27 win over No. 20 TCU at the Cowboys Classic in Arlington, Texas, ninth-ranked LSU opens its home schedule against UAB in Tiger Stadium.

Kickoff between the Tigers and Blazers is scheduled for 6:02 p.m. The game will be televised nationally on ESPNU and can be heard on the LSU Sports Radio Network and in the Geaux Zone on LSUsports.net.

LSU brings a 1-0 mark into the game following its season-opening win over TCU. UAB, members of Conference USA, dropped a 34-31 overtime decision to Troy in its season-opener. Saturday’s game will be just the second meeting between the teams and the first since a 13-10 UAB victory in week 4 of the 2000 season.

Since that UAB win over LSU in 2000, the programs have gone in opposite directions, as over the past 13 years LSU has won two national titles, four Southeastern Conference championships and played in 13 bowl games. UAB has had just three winning seasons since 2000.

UAB remains the last non-conference team to beat LSU in Tiger Stadium as the Tigers have racked up 34 straight wins over non-SEC opponents since then. LSU coach Les Miles brings a 25-0 mark in non-conference home games into the UAB contest.

LSU has won seven straight home openers and the Tigers are 7-1 in home openers in Tiger Stadium under Miles with the only loss coming against Tennessee in the 2005 season.

“The focus for us this week has been improving each day in practice so that we can take it to the field on Saturday,” Miles said. “We’ve had a good week of practice. I have liked the effort, focus and concentration. The key is to build on what we accomplished in the first game of the year and take steps as a team in the right direction.

“We are excited about finally getting into Tiger Stadium for a game. There’s nothing like a Saturday night in Death Valley and I can’t wait to take the field with this team.”

Last week, LSU’s offensive looked as if it was in mid-season form, racking up 448 total yards (197 rushing, 251 passing) against a TCU defense that returned nine starters from a unit that led the Big 12 in total defense in 2012.

Senior quarterback Zach Mettenberger connected on 16-of-32 passes for 251 yards and a TD in the win over the Horned Frogs. The 251 passing yards were the most in a season-opener for a LSU quarterback since 2006 when JaMarcus Russell tossed for 253 yards in a victory over Louisiana-Lafayette.

Mettenberger was aided in the passing game by a running attack that saw junior Terrence Magee rush for 95 yards and a pair of scores and Alfred Blue going for 89 yards.

Defensively, the Tigers played well against TCU, limiting the Horned Frogs to just 249 yards and 13 first downs. LSU used five first-time starters on defense, including three on the defensive line. LSU is expected to get the services of senior linebacker Tahj Jones back for the UAB game after he sat out the TCU contest with a minor injury.

Against UAB, the LSU defense will be challenged by a Blazer offense that featured a quarterback who threw for 300 yards last week against Troy and wide receiver Jamarcus Nelson, who caught 10 passes for 199 yards and a pair of TDs. The UAB offense piled up 453 total yards, 339 coming on the ground, without a turnover in its near win over the Trojans.

Leading 31-17 in the fourth quarter, UAB’s defense allowed 17 unanswered points, including the game-winning field goal in overtime against Troy. The Blazer defense allowed 497 total yards, 319 coming through the air, in the season-opener.

“UAB has had success in that (Tiger) stadium,” Miles said earlier this week. “They have a quality coach in Garrick McGee, who was an offensive coordinator who had a lot of success at Arkansas. He’s a very, very talented guy and he will have his team ready to play. They are explosive on offense and we are preparing to see both of their quarterbacks. They will mix it up on you offensively so there’s a lot you have to be ready for.

“They have a veteran defense that we expect to come in here and play hard. The key for us is to focus on what we can control and that’s our execution on both sides of the ball and in special teams. I’m looking for improvement in all three areas.”

The UAB game will serve as the first of three straight home games for the Tigers as next week LSU hosts Kent State followed by the Southeastern Conference opener against Auburn on Sept. 21.