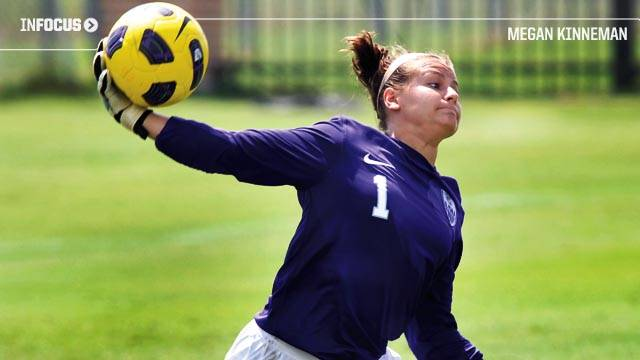 Megan Kinneman is an Exemplary Student-Athlete

In the 92nd minute of a 2012 contest at Ole Miss, LSU soccer head coach Brian Lee made the decision to bring Megan Kinneman on for a penalty kick.

Two startling facts here, Megan Kinneman is the Tigers’ goalkeeper and this was not her first time lining up for a penalty kick.

“I think because I often have to defend PKs, I have more confidence taking them,” Kinneman said. “I am able to observe shooters’ tendencies and then use that information to take my own.”

She converted the Golden Goal and made four saves in the 3-2 victory against the Rebels. Kinneman also successfully fired another penalty kick against 18th-ranked Kentucky earlier in the year, which set a new team record for scoring by a goalkeeper.

In 2010, Kinneman started all 14 games in which she played as a true freshman.

She began her collegiate debut on a high note, shutting out in-state rival Louisiana-Lafayette in a 1-0 victory before making an impressive nine saves in a narrow 1-0 defeat to 21st-ranked Illinois in her road debut. She even posted an LSU single-season record of 0.66 goals against average, which ranked No. 1 among goalkeepers in the SEC in the 2010 season.

Kinneman’s early success led to selections to the SEC All-Freshman and SEC All-Tournament teams after the regular season.

Despite her accomplishment as a freshman, Kinneman spent much of her sophomore season in a limited role as backup to starting goalkeeper Mo Isom, who was playing her senior season in 2011.

“The transition from freshman to sophomore year was difficult because it was a big role change,” Kinneman explained. “Sophomore year, I started the first few weeks in a bit of a slump allowing Mo Isom to earn the starting role over me. My role became more indirect as I supported my teammates from the sideline and worked to push them in practices.”

After suffering a sophomore “slump,” she returned to prime form in 2012, ranking second in the SEC with 117 saves on the season and setting the SEC’s single-season high with 15 saves against Georgia. She recorded double-digit saves in a single-game four times during the season.

Kinneman attributes many of her accomplishments to her family, who also give her a sense of comfort in each game.

“I started playing soccer when I was four years old,” Kinneman said. “My older brother and sister were actually both goalkeepers and we all trained together. I always looked up to them by watching their games and just fell in love with soccer. It’s on the field or around soccer that I feel the most comfortable. Something about the game fit me naturally at a very young age.”

Kinneman provides an offensive and defensive spark on the pitch, along with a huge leadership role between the posts. Along with her outstanding athletic ability, Kinneman also excels off the field in the classroom and in the community.

“Being a goalkeeper, it comes with the position to organize and direct your teammates on the field. I have always considered myself more of a ‘lead by example’ kind of player,” Kinneman noted about her leadership ability. “But as you progress in this program, it gets more important to be able to lead vocally as well in order to help the younger players adjust more quickly to the new environment.”

Kinneman’s efforts in the classroom and in the community did not go unnoticed. She was named to the SEC Academic Honor roll twice in 2011 and 2012. She was also named to the SEC Community Service Team following the 2012 season.

The LSU soccer team has been working with the KidsHope Program at a local elementary school, where they mentor at-risk students for one hour per week.

The team also volunteers at local events, such as Race for the Cure and Relay for Life. In addition, Kinneman has joined an organization on campus called Best Buddies, where students are paired with a “buddy” who has a mental or physical disability. The “buddies” develop a one-to-one relationship with each other and impact each other’s lives through the program.

“Every time I hang out with my buddy, Darryl, I am amazed by his positive outlook on life,” Kinneman said. “He has become a lifetime friend who helps me to be a better person.”

Kinneman will continue to grow her abilities in all areas of her life, as a goalkeeper, a penalty taker and a leader, to help lead the Tigers to a successful season in 2013.