In Focus: 'Life of the Team' 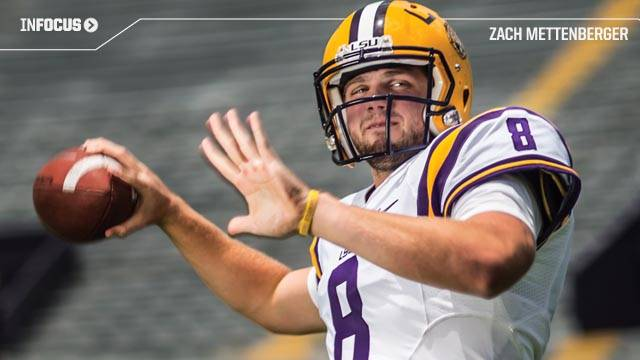 “The Quarterback is the Life of the Team”

As Zach Mettenberger takes the field on Saturdays this fall, the pressure and expectations will not be overwhelming. The veteran out of Watkinsville, Ga. knows expectations set by his coaches and teammates. He’s reached this level of comfort by past experiences. These past experiences help the fifth-year senior signal caller to lead his team with dedication and humor.

Learning from past mistakes has led to a comeback at one of the premier schools in the SEC. When other student-athletes have faltered after making mistakes, Mettenberger has taken adversity head on. Learning from missteps is what has made him into the person and quarterback he is today.

“There was a moment in time where I didn’t know if I was going to be able to make a comeback,” Mettenberger said. “Fortunately things worked out the way they did, and I was able to make it back to a big-time SEC program.”

When he was at his lowest point, Mettenberger’s mom, Tammy, was by her son through everything. Mettenberger transferred to Butler Community College in Kansas, where he stopped to find himself.

“I think my mom is just a fan of me more than anything no matter what school I go to. We are just alike, and she has been the person to get me through all of the tough things in my life,” he said. “She is the most influential person in my life and my rock.  I really play this game for her.”

After finding his home at LSU, Mettenberger finally made his debut last year, leading the Tigers to a 10-3 season. Throwing for 2,609 passing yards, Mettenberger holds the fifth-highest single-season total in school history between national championship-winning quarterbacks Matt Mauck and Matt Flynn.

While Flynn and Mettenberger do not have much in common in their style of play, the attitude and carefree nature is something the two quarterbacks share.

“This year, we are really similar to the team in 2007,”Mettenberger said. “People compare me to Matt Flynn because he is a guy who really likes to goof around and have a good time but still takes it seriously.”

This fun attitude has been shown through the clothes Mettenberger wears and the famous mustache, but it’s just the personality that will never go away. His funny antics keep his teammates laughing and never knowing what to expect.

“There is a lot of pressure on this program and our team,” Mettenberger said. “You don’t want to be all work and no play. I try to make it fun to come in our building and goof off a bit. At the same time I take it serious and focus on the goals that we have set as a team. We’ve all grown up and are mature enough to know that line of being serious and practice instead of goofing around. We definitely keep it light and fresh.”

“He’s funny. Zach is Zach. He’s one of those guys that you want to be around on the field, but also off the field. He’s funny; he’s laid back. We have a lot of things in common,” Landry said. “The quarterback is usually the life of the team. He’s the life of everything, and that’s just how Zach is.”

While having fun with his teammates and a fresh attitude is great for the program, Mettenberger knows that 100 percent dedication and effort is needed to reach his ultimate goals of a national championship and success in the NFL. In just six months as LSU’s offensive coordinator, Cam Cameron has served as a great mentor and teacher.

“He’s made all of the quarterbacks think like an NFL quarterback. He’s a guy who has had success at that level. He has me preparing like a professional with everything I do,” Mettenberger said. “Every practice is treated like the national championship, and every workout is like it’s my last. That’s something I’ve really taken to heart and just being my fifth year you want to learn everything you can and take nothing for granted.”

While the teaching may be different, there is no other way of learning than game experience. Going into his second season as a starter, Mettenberger uses last year’s obstacles as a way to improve and learn.

“Stepping onto the field now is completely different. I know what to expect this year. I always had an idea of what to expect but until you are thrown into the fire you have no idea how tough it is to be a starting quarterback in the SEC,” he said. “Dealing with the ups and downs during the season is tough. I play this game because I love it though, and I feel like I’m more prepared now because I do have a year under my belt.”

LSU coach Les Miles has seen the improvement in Mettenberger going into his senior season. His development into a leader and a great teammate is the biggest change.

“He is trying to give the coaches exactly what they need. He is really answering that call. I like how Zach is responding to leadership and the leadership role he plays,” Miles said. “Zach is taking it seriously and I enjoy his approach.”

As Mettenberger goes into his final season at LSU, it’s the unexpected road and being at the lowest of lows that has made him into the man he is four years later. While he never thought he would call Baton Rouge home, his passion and toughness is why he is a perfect fit for LSU.

“That’s what I’ll take away from LSU in years to come. It’s the lifestyle we live here at LSU. You have to be a tough guy to play here, and we demand toughness from everyone who steps on that field,” Mettenberger said. “We fight to be the best in the country and will never give up. This program has given me a second chance, and I’m grateful for it. As my life continues after football, there will be a lot of tough things. This place has helped me keep my head up and fight through no matter what happens.”