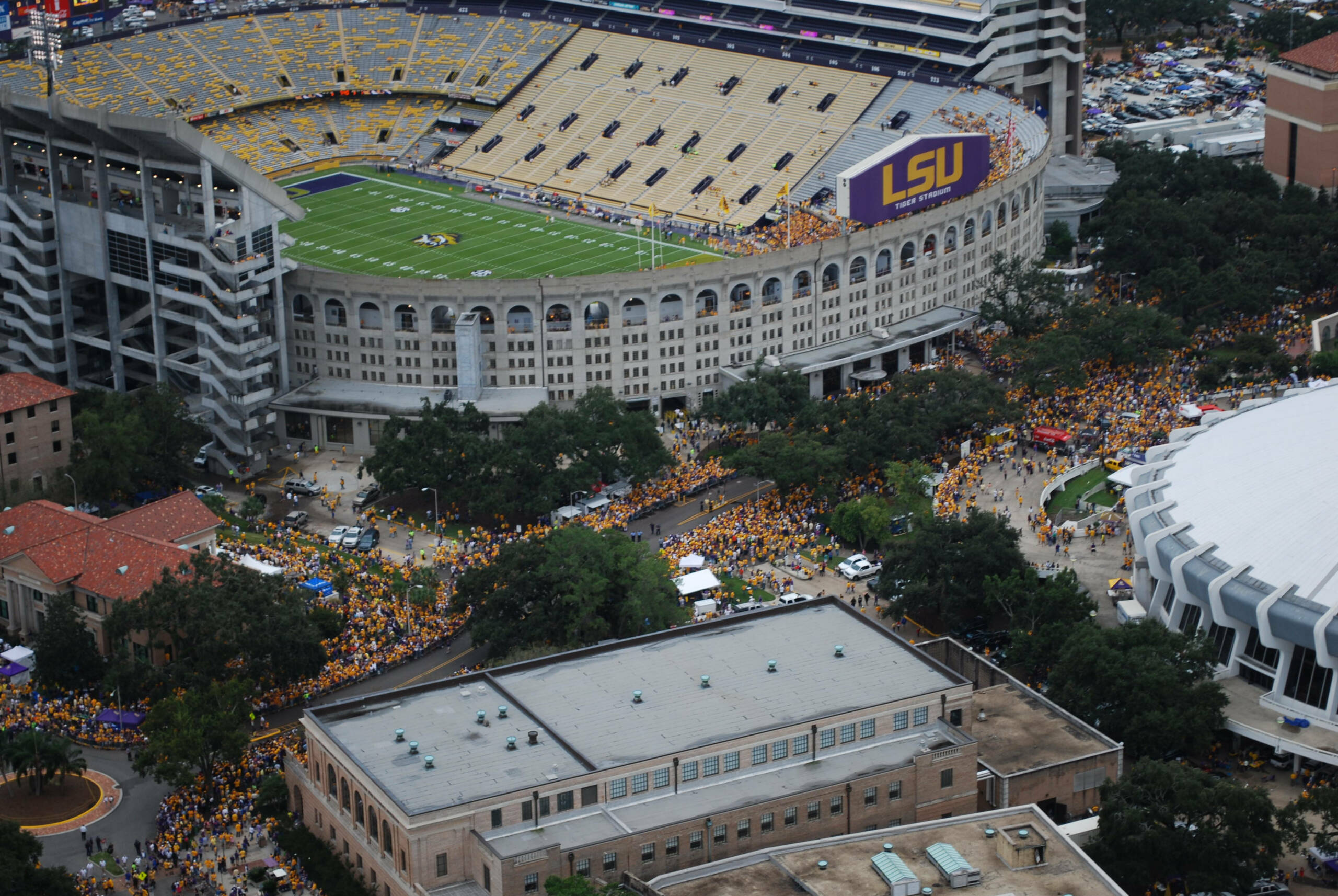 BATON ROUGE – LSU has issued a series of reminders and helpful hints for Tiger fans planning to attend Saturday’s season-opener against UAB in Tiger Stadium.

SOUTH LAWN AND SUGGESTED PEDESTRIAN ROUTES TO ENTRY GATES
The South Lawn is shut down due to construction and there will be no pedestrian access for fans in this area. The suggested route for fans walk from the west side of Tiger Stadium to the east side by way of the south end of Tiger Stadium will be to walk up South Stadium Drive, go around the Power Plant and Chemical Engineering Building, and then down Fieldhouse Drive. Gates 10, 11, 12, 18, 19 and 20 will all be available on the east side. There will be limited access for fans at Gate 14 due to construction. For fans who enter through Gates 11, 12, 18 and 20 on the east side of the stadium, the encouraged pedestrian route is to use Fieldhouse Drive and walk down to the stadium via Powerhouse Lane and walkways by Hatcher Hall and Johnston Hall.

Approaching Campus:
From the North
If approaching the stadium from the north, use either River Road, Nicholson Drive, Highland Road or Dalrymple Drive. From these routes, parking will be available north of the stadium, on Nicholson Drive near the Carl Maddox Fieldhouse, at Kirby Smith Residence Hall lots off Aster and Roosevelt Streets, or at the Pleasant Hall lots on Dalrymple Drive.

From the East or South
If approaching the stadium from east or south, use either College Drive, Acadian/Stanford exit, Highland Road or Burbank Drive and Nicholson Drive. Parking for those using these routes is available on Gourrier Lane south of the stadium, off River Road near the Mississippi River and or additional lots east of the stadium in the vicinity of the John M. Parker Coliseum.

NEW PREGAME TRAFFIC ROUTE SELECTION TOOL
LSU has a new convenient way for fans to find the best pregame route to the game.  Please click here to use the new tool that lets fans find a suggested access route to the parking lot they plan on using for the game.  Simply select the parking lot and then enter your inbound direction on Interstate 10.  A suggested access route will be given based on pregame traffic restrictions.  Please be reminded to adhere to all law enforcement direction during pregame and postgame traffic.

NEW PARKING LOT NAMES | Car Parking Details
The names of each parking lot on campus have been renamed form the alphabetical system to a numerical system based on dividing the campus into quadrants (100’s, 200’s, 300’s, and 400’s) in relation to Tiger Stadium. This will not affect current parking permit locations. Permit holders will remain in their current parking lot locations, however, the name of the lots have changed. To get the most updated game day parking map, visit LSUsports.net/parking.

“FOLLOW THE GOLD” – NEW GAMEDAY PARKING SIGNAGE
To go along with our new parking lot names, we have installed new gameday parking lot signage across campus.  The new signs are all uniform in design and are the color gold.  We ask fans to “Follow the Gold” this season to find their parking lot.

REMINDER – ENTRY GATES | Stadium Diagram
Beginning with the 2012 season, the west side gate structure of Tiger Stadium changed.  The old “Portal A” is now designated as Gates 1 through 6, from south to north.  Tickets are admissible through all gates.  Fans are encouraged to arrive early and become familiar with the new gating system. In addition, “Portal B” no longer exits due to the construction on the south side of Tiger Stadium. Those fans who used Portal B in the past are encouraged to use Gates 1-3 on the west side of Tiger Stadium.

WEATHER AND HEALTH | Forecast
Fans should be prepared for summer-like weather conditions.  High heat temperatures may exist, so fans are encouraged to drink plenty of fluids and hydrate before Saturday and throughout the game day.  Fans are also encouraged to use mosquito repellant while tailgating if necessary.  Fans who feel sick should seek assistance from an event staff team member or go directly to a first aid station.

FAN ASSISTANCE
Fans that need help in the stadium can text “LSU” followed by the issue and their location to 69050. “If you see something, say something.”

RECYCLING AND TRASH
Fans are asked to assist stadium and university staff by using the proper receptacles and throw items away.