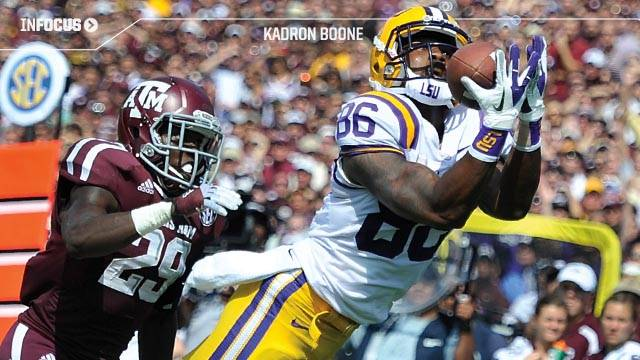 As the Golden Band from Tigerland takes the field, the fans of Tiger Stadium pause anxiously to hear “Pregame” begin before chanting “LSU” at the top of their lungs. Each person in the stands feels the rush of excitement in the commanding atmosphere of Death Valley, and it’s no different for senior wide receiver Kadron Boone in the locker room before every game.

“When we’re running through the tunnel, you can hear everyone going crazy,” Boone said. “That’s an experience that I still get butterflies from every time I go into that stadium. Just being there on the field in front of 90,000 fans, it feels unreal.”

The Ocala, Fla., native couldn’t pass up the pounding of Tiger Stadium as a recruit, and after three seasons, he knows that no matter the time of day or night and no matter the opponent, every player in the purple and gold is positive that the crowd will not let them down.

“It’s not even the big games, it’s really any home game,” he said. “Those fans are the best fans I’ve ever been with. Growing up in Florida, you hear about the big Florida schools, but Death Valley is a different experience. I can’t pick one game as my favorite. It’s every game. The crowd is always rowdy, on its feet and behind us for every moment.”

The supportive nature of the crowd causes an equally supportive foundation on the field. Each player works together, and Boone plays a role in the success of the wide receiving tandem of juniors Odell Beckham, Jr. and Jarvis Landry, as the trio is constantly working together and improving while also mentoring the younger players.

“We all mentor each other and have great chemistry this year,” Boone said. “We critique each other, and we look after each other. If I’m doing something wrong, I know Odell or Jarvis will show me a way to correct it. Or if I see something they’re messing up, I tell them. We just always help each other out.”

Despite the pressures of maintaining assignments in the game, Boone understands the importance of being a senior and veteran player at an extremely competitive Southeastern Conference school.

“I’m really just trying to be a leader,” he said “It’s about being a leader when things are good and when things are not. Because I’m a senior, I’m really trying to keep everyone level-headed. At the end of the day, we all have a common goal, and that’s to win the championship.”

Part of the team’s growth and success comes from the work ethic and experience of the upperclassmen and their dedication to the Tigers’ success in all aspects of what it means to be a student-athlete. Boone has joined teammates to help out the community in various ways, earning him Student-Athlete of the Month honors by the Cox Communications Academic Center for Student-Athletes, and his actions inspire fellow seniors and younger players.

Boone recognizes that a hard-working team is an equally supportive family, and he is grateful for the opportunity to know and work with so many people each year.

“Off the field, there are so many favorite moments,” Boone said. “We spend so much time with each other. It’s just great getting to know the guys. For me coming in as a freshman, I was able to get to know the older guys, and each year I’ve grown up a lot. I’m meeting even more new guys, and I feel old. I remember when Jarvis and Odell were only freshmen, and they’re juniors now. It’s great just being around new faces and getting to know them.”

So regardless of the game, regardless of the time, regardless of the Top 10 or unranked opponent, the LSU football players remain part of a team and family through it all. The meshing of talent and passion is always apparent, and Boone, along with every other teammate, will feel the surge of excitement in the locker room before running onto the field to the roar of the crowd. The purple and gold carries a common goal, and one that Boone is quick to say: