Six to be Inducted Into LSU Athletics HOF Sept. 13 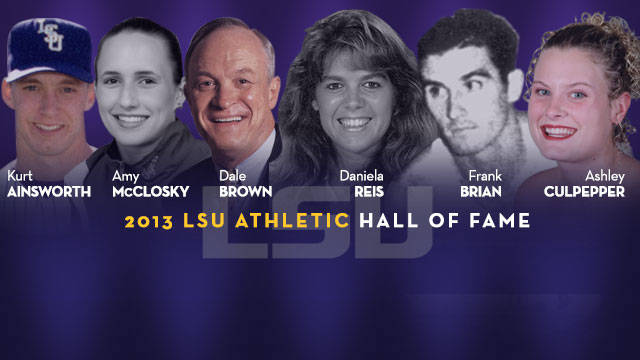 BATON ROUGE — Five former LSU standouts and a former LSU coach will be inducted into the LSU Athletic Hall of Fame on Friday, September 13 in the Pete Maravich Assembly Center.

Brown took over a struggling LSU men’s basketball program in 1972 and built it into a consistent winner that played in front of sell-out crowds in the Pete Maravich Assembly Center. He led the Tigers to Final Four appearances in 1981 and 1986, along with two other NCAA Elite Eight appearances (1980, 1987) and one more Sweet 16 berth (1979). He built a powerhouse program in the SEC, winning league titles four times (1979, 1981, 1986, 1989) while taking LSU to 13 consecutive NCAA Tournament appearances.

He was named National Coach of the Year in 1981 when the Tigers won an SEC title and stormed to the Final Four in Philadelphia. In 1986 his Tigers stunned the college basketball world when he took a Cinderella team from an 11th seed in the NCAA Tournament to a Final Four berth in Dallas. He earned SEC Coach of the Year honors four times (1973, 1979, 1981, 1989). By the time he retired from LSU in 1997, he compiled a 25-year record of 448-301 and coached three first-team All-Americans – Rudy Macklin, Chris Jackson and Shaquille O’Neal. A 1957 graduate of Minot State, Brown lives in Baton Rouge.

Ainsworth, who starred at Catholic High School in Baton Rouge, played baseball at LSU from 1998-99 and was named both All-American and Academic All-American in 1999. One of the greatest pitchers in school history, he led the SEC in strikeouts in ’99, earning NCAA Regional Tournament Most Outstanding Player honors before being selected in the first round of the Major League Baseball draft by the San Francisco Giants.

He was a member of the 2000 US Olympic Team that won the gold medal in the Sydney Games. He pitched four years in the major leagues for San Francisco (2001-03) and Baltimore (2003-04) before retiring in 2004. He is a founding partner in Marucci Sports in Baton Rouge. He graduated from LSU in 2004.

Brian, a high school standout from Zachary, lettered in men’s basketball at LSU from 1942-43 and 1946-47 as a guard. His college career was interrupted by military service in World War II, serving in the US Army from 1944-45. He was named All-Southeastern Conference in basketball in 1942-43 and again in 1946 after returning from the war. He led the Tigers in scoring in 1943 with a then-school record of 17.7 points per game and was second in the SEC in scoring in 1947. He was named to the SEC All-Tournament Team in 1947. Brian also participated in the 1943 SEC Track Championships in four events.

He went on to have a stellar professional basketball career, earning NBL Rookie of the Year honors in 1948 for the Anderson Packers, NBL All-Star honors two times and NBA All-Star honors two times. He played in the 1955 and 1956 NBA Championships for the Fort Wayne Pistons and scored 6,663 points during a 10-year career. He was inducted into the Louisiana Sports Hall of Fame in 1986. Brian is retired and living in Zachary.

Culpepper-Gluck lettered in women’s diving at LSU from 1996-2001 and was the 2000 NCAA Diver of the Year after winning the NCAA national title in the 3-meter diving event. She earned 11 All-America awards during her LSU career, including six first-team honors. In addition to her 2000 national title, she was a silver medalist on the platform in 2001 and bronze medalist in the one-meter event in 2000. She was the 2000 SEC Diver of the Year after winning the SEC title in platform diving that year.

McClosky-McGinley lettered in gymnastics at LSU from 1995-98 and earned All-America honors three times, as well as Academic All-America in her final two seasons. A standout on the balance beam, she was the first gymnast in LSU history to score a perfect 10.0 on the beam. She was twice named All-SEC and in 1998 won the SEC Balance Beam Championship.

The NCAA Woman of the Year nominee from Louisiana as a senior, McClosky-McGinley was a member of Omicron Delta Kappa, Alpha Epsilon Delta and Golden Key. She earned her undergraduate degree from LSU in 1999 and earned her Doctor of Medicine from Tulane in 2004. She is currently a board certified Emergency Physician who has been practicing for the past seven years at Union Memorial Hospital in Baltimore, Md.

Reis lettered in volleyball at LSU from 1989-92, establishing herself as the finest setter in school history. She was named All-American three consecutive years by the American Volleyball Coaches Association and led the Lady Tigers to back-to-back Final Four appearances in 1990 and 1991.

She was named All-SEC in each of her final three seasons and earned SEC Tournament MVP honors as a freshman in 1989. She still holds the SEC and LSU records for most assists in a career with 6,379 and she ranks fourth in league history while holding the LSU record for most assists in a single season with 1,701. She also ranks ninth in NCAA history in career assists. Reis now lives in her native Brazil.