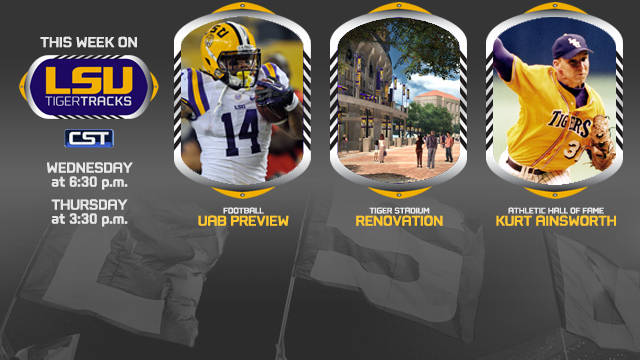 BATON ROUGE — This week’s edition of LSU Tiger Tracks, a program highlighting various aspects of the university and its athletic department, can be seen at 6:30 p.m. Wednesday and at 4:30 p.m. Thursday on Cox Sports Television.

LSU Tiger Tracks begins with a preview by correspondent Garrett Walvoord of Saturday’s football home opener, as the ninth-ranked Tigers take on UAB at 6 p.m. in Tiger Stadium.

The show continues with a visit to the studio from former LSU All-America pitcher Kurt Ainsworth, who will be inducted along with five other Tiger greats into the LSU Athletic Hall of Fame on Friday, September 13 in the Maravich Center.

LSU Tiger Tracks concludes with a look the recent renovations completed in and around Tiger Stadium in preparation for Saturday’s contest versus UAB.

This Week: An update on the nationally-ranked men’s and women’s basketball squads; a report on the gymnastics team’s battle to overcome COVID-19 obstacles; a look at football offseason workouts; a recap of the baseball First Pitch Banquet; and a spotlight on the work of LSU researchers to discover treatments for COVID-19.
Inside LSU Sports - Episode 4 (2022)