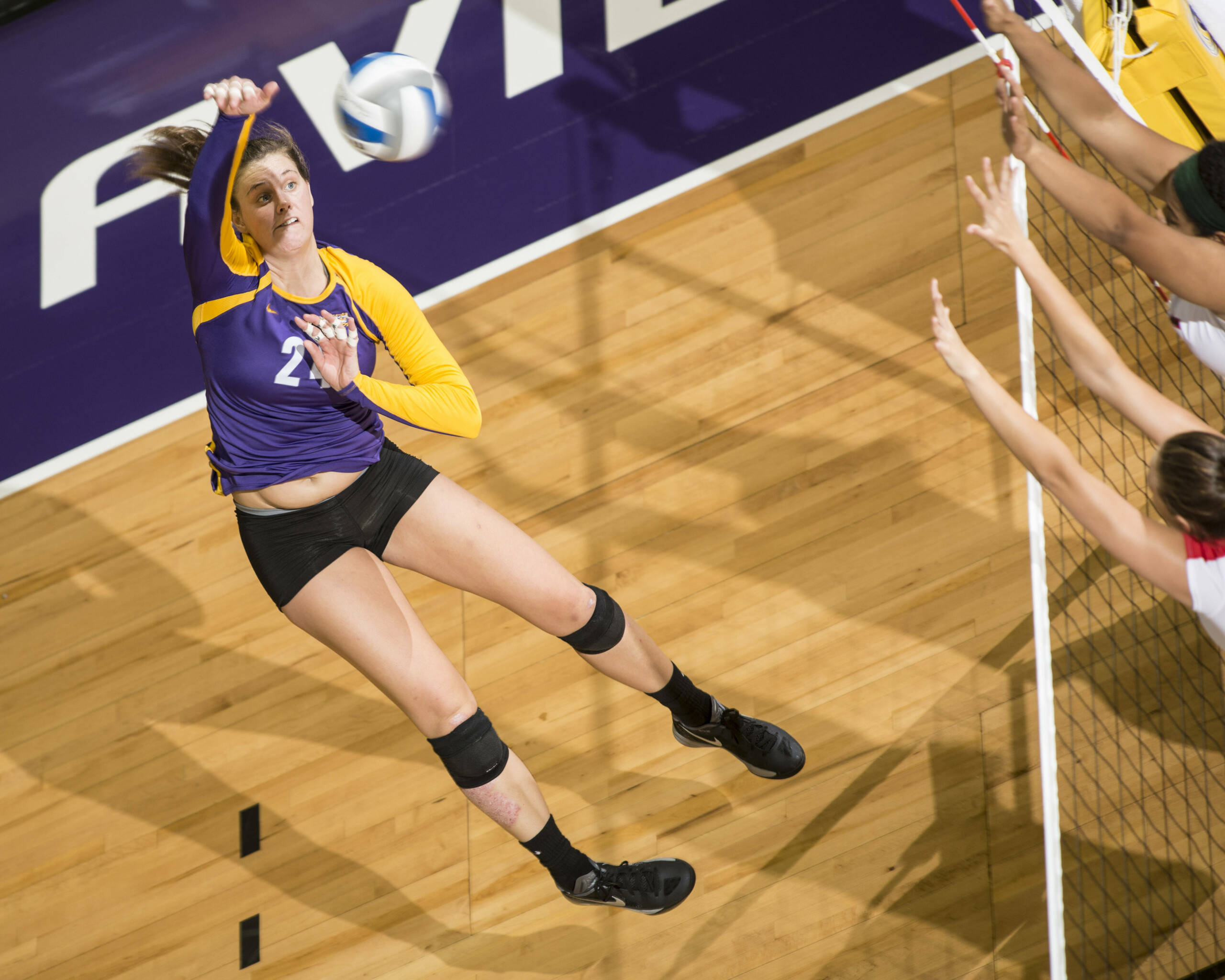 Cati Leak, OH, 6-2, So., Guntersville, Alabama
Leak turned in a career weekend en route to Tiger Classic MVP honors as LSU defeated Texas-San Antonio, UC Davis and San Diego State (2012 NCAA Tournament participant & team receiving votes in AVCA Top 25 poll). The sophomore outside hitter posted a SEC-leading 4.92 kills per set on a crisp .341 hitting percentage after she averaged 1.62 kills per set on a .086 hitting percentage last season. Her 3.08 digs per set enabled her to compile a SEC-best three double-doubles during opening weekend. She ripped a career-high 19 kills to go along with 14 digs versus UTSA. The Alabama native then shattered that mark and belted 31 kills on a scorching .452 hitting ratio against UC Davis. The 31 kills was the SEC’s top performance on the weekend and the highest kill total by a LSU player since Carmis Franks knocked 30 spikes versus South Carolina on October 23, 1998. Leak capped the weekend with a solid all-around effort with 14 kills, 12 digs and five blocks during the San Diego State match.

Briana Holman, MB, 6-1, Fr., DeSoto, Texas
Holman had a solid opening weekend for LSU and impacted play in all facets of the front row. She cranked 2.50 kills and 1.50 blocks per set. The 1.50 blocks per set were third-highest in the SEC. She saved her best performance for the Tiger Classic championship match versus San Diego State, a team receiving votes in the AVCA Top 25 poll and a 2012 NCAA Tournament participant. The Texas native popped 15 kills and added nine blocks just shy of a double-double.

Notes on the Tigers
LSU was one of seven SEC programs to post an undefeated opening weekend. The Tigers defeated Texas-San Antonio, UC Davis and San Diego State en route to the Tiger Classic title. Cati Leak was named the tournament’s MVP, while Desiree Elliott and Malorie Pardo secured all-tournament honors. A key to LSU’s success was a 2.54 blocks per set average, tied for second-most in the SEC rankings. The Tigers recorded 18 blocks during their five-set triumph over San Diego State, a team receiving votes in the AVCA Top 25 poll and a 2012 NCAA Tournament participant. Leak blasted a SEC-leading 4.92 kills per set and shattered her career-high with a 31-spike performance versus UC Davis. The 31 kills also were the most by a LSU player since Carmis Franks during the 1998 season. The Alabama native connected for a .341 hitting percentage and compiled a SEC-best three double-doubles. Elliott became the 20th player in program history to eclipse 1,000 career kills. She also surpassed former All-American Lauren DeGirolamo for 19th place on the program’s all-time list. Elliott amassed her first career double-double, 22 kills and 12 digs, during the UC Davis match. The 22 kills matched her second-highest career output. Pardo handed out 12.00 assists per set, third-highest among SEC setters, as LSU’s offense came away with a .265 hitting percentage. She distributed a career-high 68 assists against UC Davis and heads into next weekend’s action 18 helpers away from moving past Luciana Santana (1992-95) for sixth place on LSU’s all-time leaderboard. Briana Holman made an instant impact for the Purple and Gold. She produced 2.50 kills and 1.50 blocks per set. She buried 15 kills and nine blocks versus San Diego State. LSU’s back row group was led by Katie Lindelow, who made her first three career starts at the libero position. She reeled in 4.31 digs per set sparked by a 28-scoop effort during the UC Davis match. The Tigers a stretch of three straight weekends on the road and travel to the Rice Invitational where LSU will square off Arkansas-Little Rock [Friday – 4 p.m.], Texas A&M-Corpus Christi [Saturday – 10 a.m.] and Rice [Saturday – 7 p.m.].