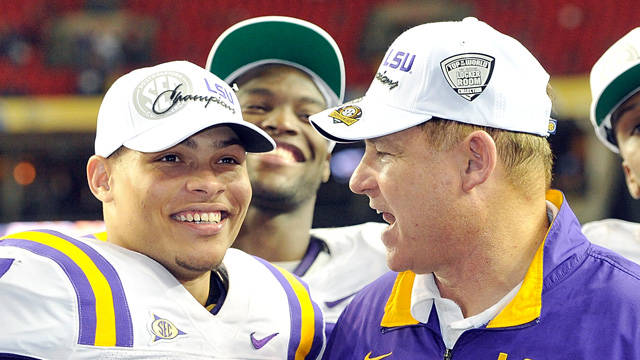 NEW HAVEN, Conn. – LSU cornerback and return specialist Tyrann Mathieu headlines a list of 50 student-athletes named to the watch list for the Walter Camp Award, which is presented annually to college football’s National Player of the Year, the Walter Camp Foundation announced on Friday.

Mathieu, the reigning National Defensive Player of the Year, is one of 10 Southeastern Conference players on the watch list and he is one of 13 defensive players across the nation on the list. Mathieu seeks to become the first LSU football player to capture the award in its 45-year history.

He posted 76 tackles, two interceptions and ran back two punts for touchdowns last season for the SEC-champion Tigers.

The watch list will be narrowed to 10 semifinalists in mid-November. The 2012 Walter Camp Player of the Year recipient, which is voted on by the 124 NCAA Bowl Subdivision head coaches and sports information directors, will be announced live on ESPN SportsCenter on Thursday, Dec. 6. The winner will then receive his trophy at the Foundation’s annual national awards banquet on Jan. 12, 2013 at the Yale University Commons in New Haven.

The Walter Camp watch list concludes the National College Football Awards Association’s unveiling of candidates for national individual awards for the 2012 season. In all, LSU football has garnered 25 nominations for 12 different awards, including the Lott Trophy candidates that were announced earlier this summer.