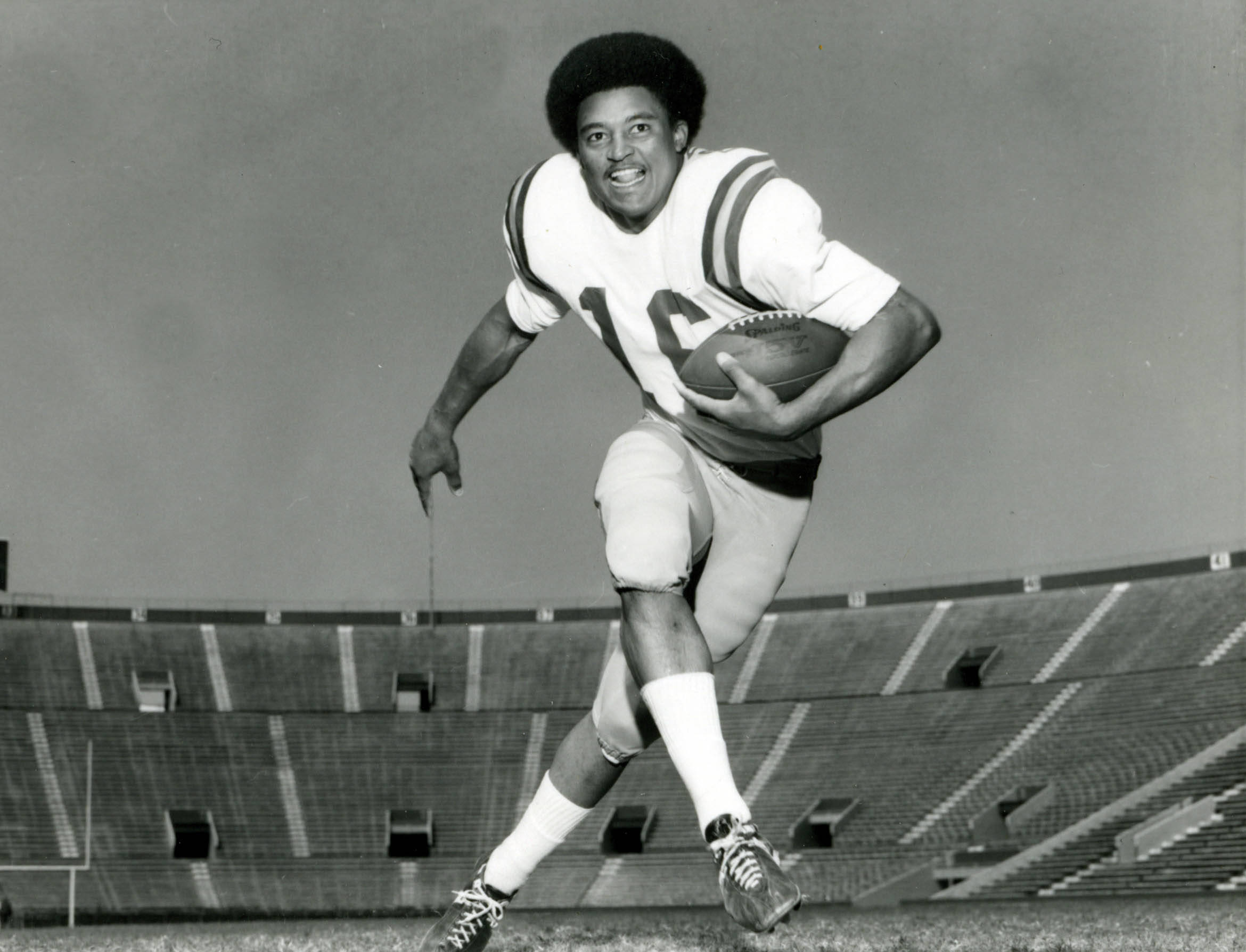 Forty years ago, before Rivals, before Scout, before just anybody thought about the mass dissemination of  football recruiting information for that matter, word somehow spread about a football phenom from a little all-black school in the middle of cane fields along the west bank of the Mississippi River in St. John Parish.

At Second Ward High School in Edgard, Terry Robiskie was a man among boys, a 6-foot-2, 210 pounder who once went 97, 84 and 80 yards for touchdowns on quarterback sneaks in a single game, who averaged 10.2 yards per carry and who led his school to Class 1A championships in 1971 and 1972 and a 48-2 record during his career.

“You had to see him in person to really appreciate him,” longtime Times-Picayune columnist Peter Finney said. “His coach (Rudy Dinvaut) told me he would deliberately have his team draw 15-yard penalties just so Terry could get more yards.

“I don’t know if that’s true or not, but I’ve never seen anybody who could get more out of a simple quarterback sneak.”

Grambling, where several family members had attended, and Tulane also were in the picture.

But in the end, he chose nearby LSU, which only two years before had signed its first African-American players. Even Gov. Edwin Edwards, who never claimed to be a football fan, got involved.

“In today’s world, it would have had the same impact if LeBron James had signed with someone out of high school,” said A.J. Duhe, Robiskie’s fellow signee in the Class of ’73 and still a close friend. “For Coach Mac (Charlie McClendon), I know it was quite a blessing to get Terry.

“Terry was a big man on campus before he ever got to campus.”

And at LSU he didn’t disappoint. Converted to running back, he was the Southeastern Conference’s Most Valuable Player as a senior in 1976, the first Tiger to gain more than 1,000 yards in a season and left as the school’s career rushing leader.

After a five-year, injury-shortened career in the NFL, Robiskie turned to coaching on the advice on the advice of Al Davis, the man who drafted him to the Oakland Raiders.

That began an uninterrupted stint in the league that endures more than three decades later. Robiskie is currently the wide receivers coach of the Atlanta Falcons.

But it’s for those accomplishments from long ago that he is being inducted into Louisiana Sports Hall of Fame in Natchitoches on Saturday night, June 23.

“I don’t think I started out thinking about being the No. 1 player in the country or signing a scholarship and I didn’t even know what the NFL was,” Robiskie said. “To me, it was all about competition – beating your cousins in the backyard or the team from the next town.

“But it’s nice to be remembered for what you did by the folks in your home state.”

And staying in his home state, Robiskie said, was the primary reason he signed with LSU.

“I wanted to pick a school in Louisiana where I felt the most comfortable,” Robiskie said. “Coach Dinvaut believed very strongly in education and told me if football didn’t work out, I needed to think very strongly about where I wanted to make a living in the long run.

“Charlie Hall was my host at Tulane, I could have been comfortable there and the main reason I didn’t go to Grambling was because Doug Williams had signed with them. But the people at LSU let me know how important it was it was to sign there.”

Just how that was done was a matter of great speculation at the time and Robiskie still isn’t one to tell tales.

Others are willing to chuckle about it, though.

“Terry sure must have had a good summer job or something,” said Duhe, who was from Reserve, just across the Mississippi from Edgard. “I came to LSU with a couple of carry-on bags and Terry had his stuff on a rolling rack, and I know people in Edgard didn’t dress that much different from us in Reserve.

“He was driving a new car, too. But it was a long time ago, so I guess the statute of limitations have run out.”

Duhe, who was elected to the Hall of Fame in 2001,  and Robiskie were roommates in Broussard Hall, an interracial pairing highly unusual at the time at any school, much less LSU.

But with Lora Hinton and Mike Williams, who had been LSU’s first black signees in 1971, sharing one room, Richard Romain and Thielen Smith, who had arrived in 1972 in another and Carl Otis Trimble and Robert Dow, the only other African-Americans signed along with Robiskie deciding to become roomies, that left Robiskie wide open.

“I think Coach Mac was trying to trying to break down some barriers still on the team then,” Duhe said. “But rooming with Terry was OK with me.

“Our only problem was that he was talking on the phone to the girls at Southern all the time. I like to talk, too and we talked to each other so much we hardly ever got any sleep. That’s why we only stayed together for one year.”

It was a different time, one of transition.

LSU, along with Georgia and Ole Miss, had become the last SEC team to desegregate in 1972.

Louisiana’s public high schools hadn’t fully desegregated until 1969 and for some, building relationships with their teammates was a new experience.

“If the white players went out drinking, they always wanted us to come with us and they had our backs,” Romain said. “I had a big Afro, and Coach Mac wanted me to cut it, but I just pushed it under my helmet. Terry had a big Afro too, but they wanted him too much to say anything.”

Said Robiskie, “I can’t tell you one bad experience I had. Coach Mac made a point of not just signing good players, but good people.

“You look at the first 10 or 12 black players at LSU, and we were all good people with strong family backgrounds. But I also came to LSU determined to fit in.”

Robiskie acknowledges encountering the soft bigotry of low expectations. On his first day in a freshman math class, an instructor told him there was no way he could pursue his desire to be an electrical engineer with being a first-rate football player.

“But you know what,” Robiskie said, “I look back on it as great advice.”

Romain, a wide receiver, recalled his parents overhearing a white fan during a game saying, “I’m sure glad we’ve got those black players,” although, Romain added, “I don’t know if they really said ‘black’ or something else.”

McClendon also had a rule about facial hair, which in his sometimes fractured syntax; he had a difficult time talking to the black players about.

“We had this white guy, Brian Zeringue, who was a real good fullback, but he had these tremendous sideburns,” Robiskie said. “He was going to quit the team if they made him cut them off, so we talked Coach Mac into adjusting his rule, and that was the end of it.

“In his heart, Coach Mac always looked on us as football players and as men.”

On the field, Robiskie was “relentless,” according to Romain, who added, “He never got tired and played at full speed all the time.”

Jerry Stovall, who became Robiskie’s position coach in 1974, said of Robiskie, “Terry was a person of character and integrity.

As a freshman, Robiskie sharing time in the backfield with Brad Davis and Steve Rogers in LSU won its first nine games before losing to Alabama, Tulane and Penn State in the Orange Bowl.

In Robiskie’s final three seasons the Tigers were 15-16-2, a result, Robiskie said, “of just never jelling. Plus, after Mike Miley left (to play baseball) we were never really settled at quarterback, and if there’s one thing I’ve learned in my time in the NFL, it’s virtually impossible to win if you don’t know who your quarterback is.”

The seeds for Robiskie’s coaching career were sewn by Davis on the day he cut him after three seasons.

“He told me, ‘One day, you’ll be a hell of a coach in the NFL,’ Robiskie said. “It had never occurred to me until then.

“But it could be raining cats and dogs and Al Davis could convince you the sun was shining.”

Sure enough, in 1982, after two years with Miami and a broken wrist that had ended his playing days, Robiskie was hired by Davis as the Raiders’ tight ends coach.

He remained with the Raiders for 12 seasons, followed by seven with the Redskins, six with the Browns, one with Dolphins and the last five with the Falcons.

Last year, the Falcons turned down Jacksonville’s attempt to hire Robiskie, a move which would have made him his son Brian’s position coach.

But perhaps, Robiskie said, that was for the best.

“I love my players like sons,” he said. “But there are things I can say to them, like threatening to choke them on the sideline, I couldn’t say to Brian.”

Twice Robiskie has been an interim head coach – in 2000 with the Redskins and 2004 with the Browns – but he’s never gotten the opportunity to be a real one, something, Robiskie said, “leaves a hole in his heart,” although he has come to a level of acceptance that it was not meant to be, not to mention the pride of drawing a steady paycheck from the NFL for three-plus decades.

Another regret for Robiskie is being passed over for the LSU job in 1995. If he had been hired, Robiskie would have been the first black coach in the SEC, nine years before Mississippi State tabbed Sylvester Croom.

“I’ll always pull for LSU,” he said. “But things change, and I’m not in touch that much.

“But I loved and respected my coaches and my teammates and I always enjoyed my time there. I’m always proud to say I went to LSU.”