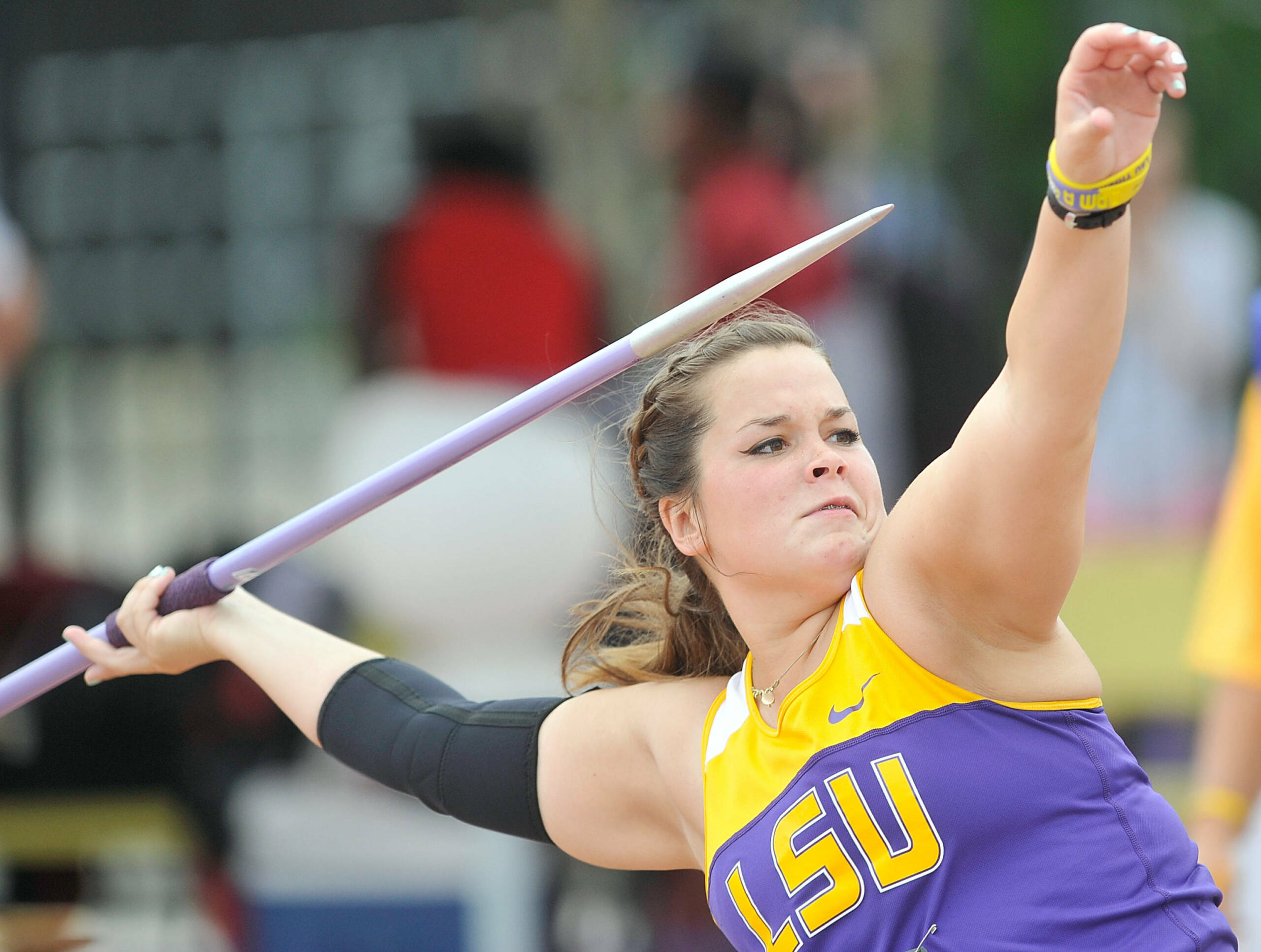 BATON ROUGE – With a trio of All-SEC runner-up finishes by juniors Damar Forbes and Brittany Porter in the long jump and sophomore Annie Simoneaux in the javelin, the LSU Track & Field teams are positioned for a strong finish in Sunday’s finale at the 2012 SEC Outdoor Track & Field Championships being held on their home turf at the Bernie Moore Track Stadium.

Saturday’s action also featured bronze-medal winning third-place finishes from senior Kyron Blaise in the men’s long jump, senior Rachel Laurent in the women’s pole vault and freshman Tori Bliss in the women’s shot put as the Tigers and Lady Tigers crept closer to the top of the team standings.

The Lady Tigers wrapped up the third day of competition in second place in the women’s team standings as they have totaled 47.5 points in the field events in the first two days of this year’s championship.

They are certainly strong contenders to take home their fifth SEC Outdoor team title in six seasons as they qualified a total of 16 athletes into championship finals in preliminary action held on Friday and Saturday. The Lady Tigers actually have 25 opportunities to score points on Sunday afternoon.

The Tigers have climbed into third place in the men’s team standings with their performance on Saturday as they have scored 28 points heading into Sunday’s finale at the SEC Championships.

The Tigers have also been strong in qualifying while combining for 11 finalists in preliminary action held over the past two days as they also boast 25 scoring opportunities tomorrow.

The Arkansas Razorbacks are poised to defend their SEC Outdoor team title after racking up 70 points for the first two days of the competition to take a 32-point lead over Georgia into the final day. Georgia is the leader in the clubhouse in the women’s team standings with 76 points for three days of competition, while the Lady Tigers are hot on their heels in their bid for a fifth SEC Outdoor crown in six seasons.

“I thought we had another great day today to put ourselves in the position to finish strong tomorrow,” said LSU head coach Dennis Shaver. “What a great job by our jumpers and our throwers to really get us off on the right foot with some big points early on. They went out there and competed really well today.”

Simoneaux opened the scoring on Saturday afternoon with eight points in the women’s javelin throw after smashing her personal record in the event with a series-best mark of 157 feet, 11 inches to take the lead in the second round. She moved into the No. 6 position on LSU’s all-time performance list in the javelin and eclipsed her previous PR of 154-5 set at the Arizona State Tri-Meet on April 17.

Simoneaux, who finished behind only the winning mark of 161-2 by Georgia’s Allison Updike, improved on her bronze-medal winning finish at the SEC Championships as a freshman a season ago.

Porter enjoyed a personal-best performance of her own in claiming her first career All-SEC honor with an impressive runner-up finish in the women’s long jump. She opened with a seasonal-best wind-aided mark of 20-9 ¼ on her first jump, before setting a wind-legal outdoor PR of 20-1 ¾ for her sixth and final jump to finish just one half inch behind Ole Miss’ Rachel Jenkins (20-9 ¾) for the SEC title.

The Lady Tigers actually picked up 11 points in the long jump as sophomore Lynnika Pitts added three in a sixth-place finish as she posted a seasonal best jump of 20-5 ¾w on her third attempt of the day.

Bliss shattered her outdoor PR and matched her lifetime PR while scoring six points in the shot put as she posted a series-best mark of 51-7 on her third throw of the preliminary round en route to third place in the event. That matched her lifetime best of 51-7 that she set during the 2012 indoor season.

Laurent wrapped up the scoring for the Lady Tigers on Saturday afternoon by tying for third place overall in the pole vault with her clearance of 13-4 ¼ in her final SEC Championships.

The men’s long jump competition certainly lived up to the reputation it has established in recent years and produced the NCAA’s No. 1 and No. 2 marks under all conditions this spring.

LSU junior Damar Forbes took the early lead with his seasonal-best wind-legal jump of 26-8 ¼ in the first round of jumps, and followed with another strong effort of 26-4 ½ in the second round to take the lead into the finals. That’s when Raymond Higgs of Arkansas leaped ahead of Forbes wind-aided jumps of 26-10 ½, 26-11 and 27-5 ¼ in the finals to take the title as the SEC Outdoor champion.

Blaise also catapulted himself into the Top 10 of the NCAA rankings with a wind-legal PR of 25-11 ½ for third place as he emerged as the No. 9-ranked performer nationally in the event. He just missed earning an All-SEC honor while eclipsing his previous personal best of 25-11 in the long jump.

Freshman Rodney Brown added three points with his SEC Outdoor Championships debut in the discus, as he threw a series-best of 173-9 en route to a sixth-place finish.

“What we did today in the men’s and women’s long jump was big. That was great for both of our teams,” Shaver said. “We expected that from Damar, but Kyron had a great effort, too. Both Brittany and Lynnika had great days. That kind of set the tone for both of our teams today.”

After qualifying for the 200-meter final with the fastest time of the preliminary round at 23.07w on Friday night, junior Kimberlyn Duncan led a trio of Lady Tigers into the final of the 100-meter dash on Saturday after winning her heat with the fastest qualifying time of the day at 11.17w. Joining Duncan in the final of the 100 meters are senior Semoy Hackett (11.25w) and sophomore Takeia Pinckney (11.35).

The Lady Tigers also qualified a pair of finalists in Saturday’s prelims in the 400-meter dash, 1,500-meter run and 100-meter hurdles for a total of 16 qualifiers in two days of preliminary action.

Sophomore Jasmin Stowers looks to defend her SEC crown in the 100 hurdles after clocking the best time of the day at 13.16 to win her heat. Junior Shanekia Hall also won her qualifying heat with a seasonal-best wind-aided time of 13.29 as she joins Stowers in the final. Lady Tiger seniors Rebecca Alexander (53.18) and Jonique Day (53.28) also qualified for their first SEC Outdoor final in the 400, while juniors Charlene Lipsey (4:23.15) and Laura Carleton (4:25.25) each advanced in the 1,500 meters.

Senior Barrett Nugent has an opportunity to make history on Sunday as he eyes his third-straight SEC win in the men’s 110-meter hurdles, which would be a first in school history. Nugent was impressive Saturday in running the fastest qualifying time of the day with a wind-legal 13.50 (+0.7) to win his heat.

The Tigers also featured three finals qualifiers in both the 100 meters and 400 meters as they are poised to score big points on the track and push for a strong finish on Championship Sunday.

Freshman Aaron Ernest led a trio of Tigers into the final of the 100-meter dash with his heat-winning time of 10.17w, while senior Keyth Talley (10.33w) and sophomore Rynell Parson (10.40w) also earned a spot in the championship final. Ernest will also line up in the 200-meter final on the final day of competition as he looks to add to his resume as the SEC Indoor silver medalist in the event.

“Our teams have really positioned themselves for strong finishes tomorrow,” Shaver said. “I believe these athletes have shown a lot of pride in competing here at home in this championship. I’m proud of the effort I’ve seen to this point. It’s important that we continue that that tomorrow and finish it off.”

Sunday’s finale at the 2012 SEC Outdoor Track & Field Championships is set to start at 1 p.m. CDT with the first field event finals of the day followed by the first finals on the track at 3p.m. The championship will come to a dramatic conclusion with the running of the 4×400-meter relays beginning at 6:25 p.m. The 2012 SEC Outdoor team champions will be crowned in an award’s ceremony at 6:45 p.m.

Fans are also invited to remain in their seats following the conclusion of Sunday’s action for a sneak peek of the latest installment of the SEC “Storied” documentary series as ESPN Films’ “Lolo” will be shown at the Bernie Moore Track Stadium. The film features the life story of Lady Tiger great Lolo Jones.