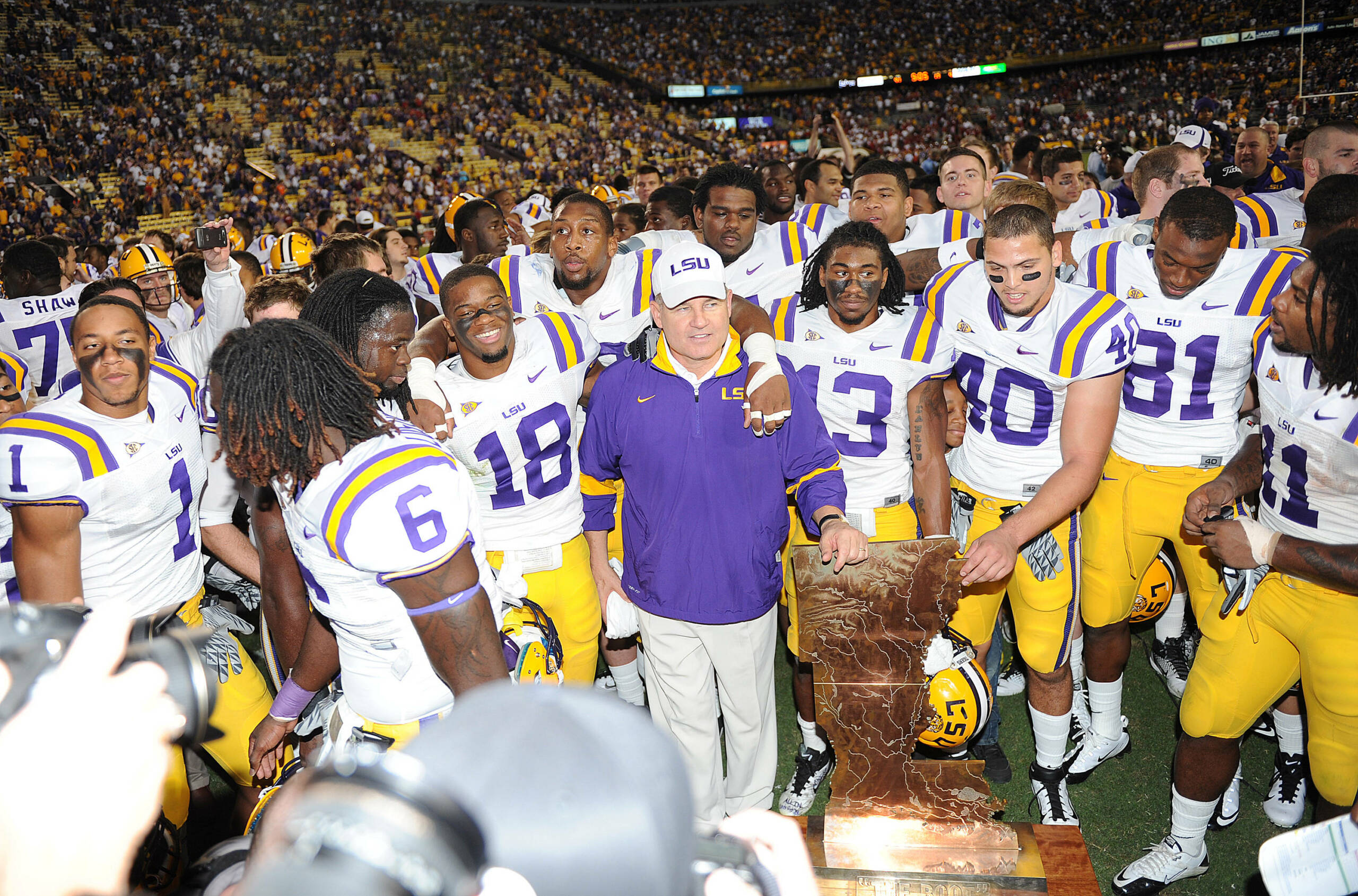 BATON ROUGE, La. (AP) – LSU’s 2011 season will be remembered for challenging Les Miles‘ crisis-management skills over and over again.

It could also go down as the greatest season in the history of a program that has been around since 1893.

Now within one more victory of an unbeaten season and a BCS national title, Miles has been voted The Associated Press Coach of the Year.

Thirty of 56 votes cast went to Miles. Bill Snyder of Kansas State was second with 16, Mike Gundy of Oklahoma State had six, Brady Hoke of Michigan got three and Lane Kiffin of Southern California had one.

As Miles reflected on the various trials he dealt with this season in an interview with the AP this week, he spoke in a hushed tone and recounted a talk he had long ago with his father in the kitchen of his childhood home.

When Miles was around 12 years old, he was worried about his dad, Hope “Bubba” Miles, who’d been passed over for a promotion and subsequently laid off, all while dealing with the death of his own father.

“We’ll be fine,” the LSU coach recalled his father telling him. “It’s the reaction to the difficult times; it’s always those days when something does not come your way and you have to make the best move – that’s what’s going to make your life rich.”

However LSU’s season ends in the BCS title game against No. 2 Alabama on Jan. 9 in the Superdome, it will go down as one of the more memorable chapters in the history of Louisiana’s most storied college football program. The events that could have derailed the 2011 campaign were numerous and diverse, yet the Tigers dominated just about every team they faced.

There was a preseason bar fight that led to starting quarterback Jordan Jefferson‘s early season suspension. There was preseason coaching shuffle brought on by former offensive coordinator Steve Kragthorpe‘s Parkinson’s disease diagnosis. Starting receiver Russell Shepard was suspended three games because he talked out of turn about an NCAA probe of a scouting service. Then there were the midseason, one-game suspensions of three key players – star cornerback Tyrann Mathieu, starting running back Spencer Ware and nickel back Tharold Simon – for failing school administered drug tests.

Through it all, the Tigers won big, starting with a season-opening 13-point triumph over then No. 3 Oregon on a neutral field in Dallas, barely more than a week after learning they’d be without Jefferson or Shepard.

Of their 13 victories, 12 have come by double digits and seven by 30 or more points. The lone exception was a tense 9-6 overtime triumph at Alabama highlighted by spectacular defensive plays.

LSU won its first eight games with pocket passer Jarrett Lee taking most of the snaps, and the rest with Jefferson getting the bulk of the work, often running option plays.

Miles said he was proud of his staff for being adaptable enough to design game plans around different styles of quarterbacks, and proud of his players for their “no-excuses” approach to every game.

“They didn’t see (the suspensions) as something they could not overcome in any way,” Miles said. “They recognized that we’ve got two veteran quarterbacks and some guys that can step in for anybody if they happen to miss their start, and that we were not going to let those things that were on the perimeter of this program affect us.”

Miles, his staff, and his players entered 2011 sensing they would be among the best in the nation following an 11-2 2010 campaign capped by a dominant Cotton Bowl victory.

The roster was laden with talented players who’d thrived as underclassmen. So when Michigan Athletic Director Dave Brandon flew last January to Baton Rouge to gauge Miles’ interest in returning to his alma mater, where he’d played for Hall of Famer Bo Schembechler, Miles decided to stick with the job he had.

LSU did not even have to give Miles a raise to keep him, although he did get both an extension and an increased budget for assistants, which he felt would further strengthen the foundation of the program.

“I looked at this building and the number of quality men and women that I was fortunate to work with – players, coaches, staff – and the idea that I would blow this up is just something I was not prepared to do,” Miles said. “I wanted to coach this team.”

Although Miles has won 75 games and a national title since becoming LSU’s coach in 2005, he hasn’t always been popular in Baton Rouge.

LSU struggled to stay in the national title picture in 2008 and 2009, and an episode of late-game clock mismanagement at Mississippi in 2009 was only made worse when he tried to explain it in his typically odd manner of speaking, which sometimes invites mockery with its disjointed syntax and the use of verbs as nouns.

Gundy, who coached with Miles for several years, said talking on TV was never the LSU coach’s strength.

“I don’t think he gets enough credit for being a pretty smart football coach,” Gundy said. “What you see on TV is not really him at all.”

The AP coach of the year award has been handed out since 1998. This is Miles’ first time winning it and he is the second LSU coach to take the honor. The first was Tide coach Nick Saban, who won it for the Tigers in 2003.

Miles, whose big-picture perspective was shaped not only by his father but his own personal health scare – a cranial operation to remove a cyst in 2001- resisted urges to lash back at his critics.

“I’m not going, ‘Ha! How do you like me now?’ I’m really not,” Miles said. “The support that is given to this program is tremendous. I could never do this without LSU. Our team is a quality group of men that just have to have victory, that will scrap and fight you tooth and nail for it. And I’ve got a quality group of coaches who love their players and put together great game plans. We fight together. … I don’t pretend for a minute it’s only me. It’s not even close.”