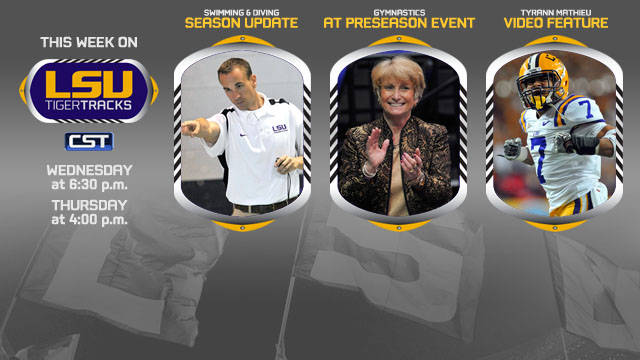 BATON ROUGE – This week’s edition of LSU Tiger Tracks, a program highlighting various aspects of the university and its athletic department, can be seen at 6:30 p.m. Wednesday and 4 p.m. Thursday on Cox Sports Television.

The show continues with a look at all of the unique sights and sounds that create the football gameday experience at Tiger Stadium and make LSU an attractive destination for prospective students.

Walvoord interviews coach D-D Breaux and members of the LSU gymnastics team who last weekend greeted their fans at the annual Gymnastics 10.0 event in the Maravich Center.

The show concludes with a video package featuring highlights of LSU All-America cornerback Tyrann Mathieu, winner of the 2011 Bednarik Award and a finalist for the Heisman Trophy.