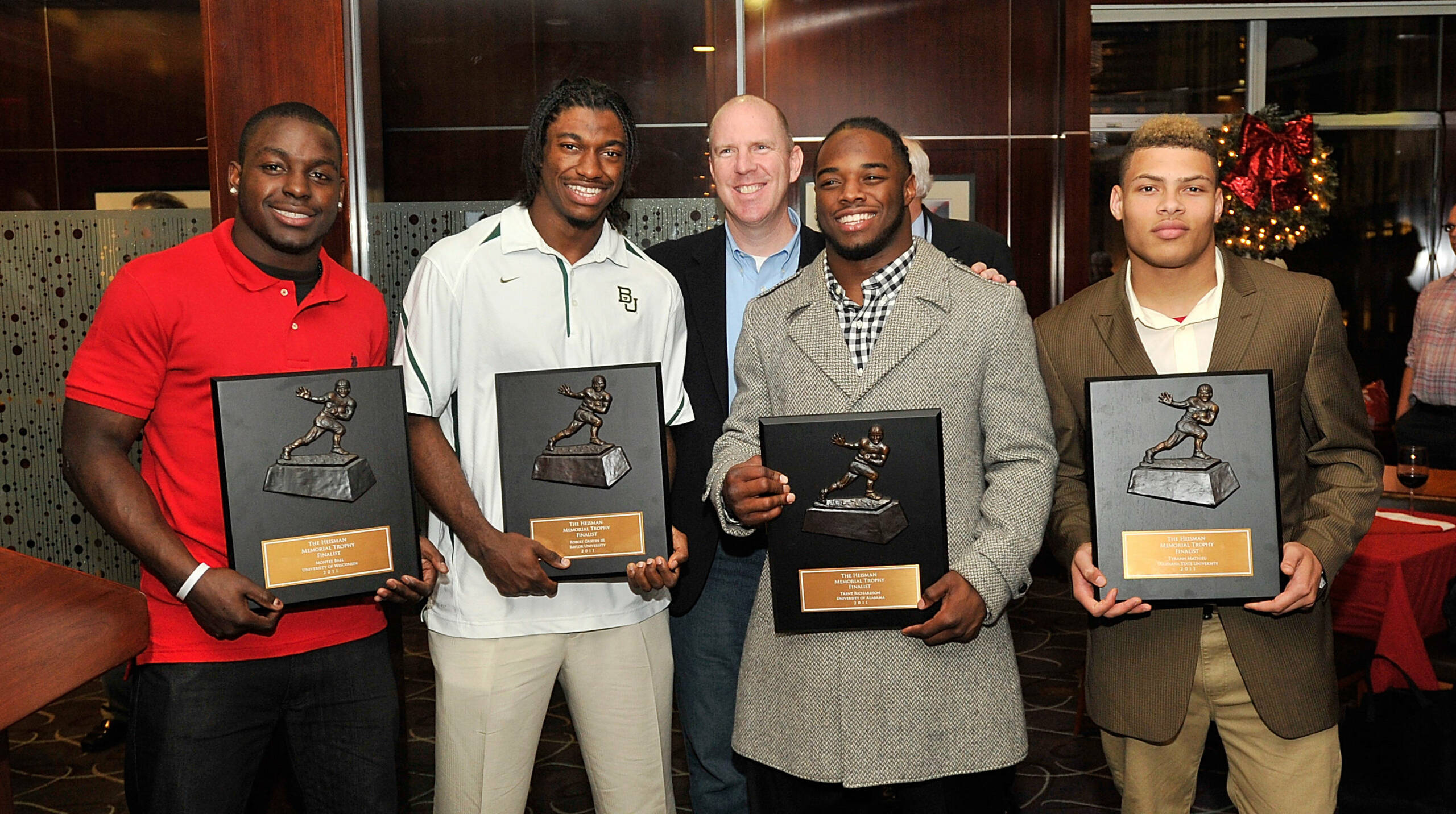 NEW YORK — In what has been an unprecedented week of individual accolades for LSU football, sophomore cornerback Tyrann Mathieu arrived in New York on Friday in preparation for the 77th annual Heisman Memorial Trophy presentation, which will be given to one of five finalists at 7 p.m. CT Saturday.

“I am just honored and excited to be here,” Mathieu told reporters Friday afternoon. “This is a dream come true. All of the finalists here are great players and I have gotten to know them the last few days. I am going to take everything in and enjoy it. This is my first time to New York and I wish my teammates were here to experience this with me.”

Mathieu is seeking to become just the second defensive player to win the award and the first since Michigan’s Charles Woodson did so in 1997. The New Orleans native is the first LSU player invited to the ceremony since Charles Alexander was here in 1977. Mathieu will also seek to do what only one other player in LSU history has done when the legendary Billy Cannon captured the honor in 1959.

“Tyrann Mathieu comes as close to anybody I have seen or played with – in college or professional ball — to being 100 percent prepared mentally and physically to deliver on any given play,” said Cannon.

Alexander, who earned Heisman votes in 1977 and 1978, agreed that Mathieu’s play has been nothing short of spectacular for the Tigers who have posted the school’s first 13-0 record and reached a second BCS National Championship Game under head coach Les Miles.

“I live in Houston now and his name is the first that comes up every time we talk LSU Football,” said Alexander. “He’s such a special player and a guy that has to be accounted for every single play. He’s a difference maker for this team. Just being there in New York, he will enjoy the moment because 20 or 30 years from now, he will realize just how special this opportunity is.”

What Mathieu has accomplished in just two seasons is spectacular. He leads the Tigers in tackles (70), forced fumbles (six) and fumble recoveries (five). Just 25 games into his career, Mathieu has already shattered the LSU record and tied the Southeastern Conference record with 12 forced fumbles. His six forced fumbles this season matched his own single-season record set last year.

His special teams play has ignited the Tigers throughout the year, none bigger than his two punt returns for touchdowns in the final two weeks of the season. Mathieu became the first LSU player since Todd Kinchen in 1991 to return punts for touchdowns in consecutive games with a 92-yarder against Arkansas and a 62-yarder that swung the momentum of the SEC Championship Game. He nearly returned a second punt for a touchdown in the second half that dazzled fans.

He earned SEC Championship Game MVP honors for his efforts, becoming the first defensive player to do so since 1994.

On Thursday night, Mathieu added to his list of honors winning the Bednarik Award as the nation’s top defensive player.

Mathieu and the four other finalists took in the sights and sounds of Manhattan on Friday in an hour-long bus tour and stopping at Rockefeller Center. He did a publicity photo shoot with the Heisman Trophy and met with dozens of high school kids from around the nation at the Wendy’s High School Heisman Awards.

Saturday’s schedule prior to the Heisman presentation calls for a 10:10 a.m. CT interview on the ESPN DirecTV bus for SportsCenter. He will also be a guest at halftime of the Army/Navy game on CBS. There will be a pre-announcement press conference before he walks the red carpet to the Best Buy Theatre.