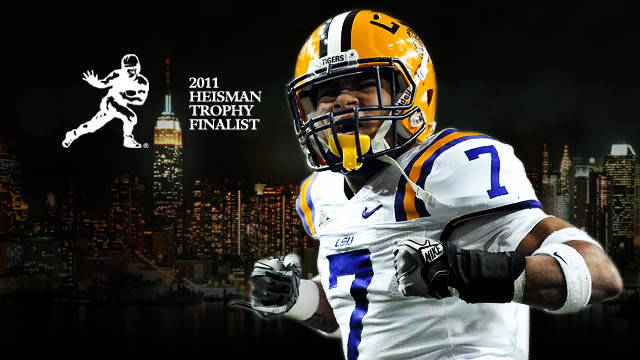 NEW YORK – For the first time since 1977, LSU football will have a representative in New York City for the Heisman Memorial Trophy presentation as outstanding sophomore cornerback/return specialist Tyrann Mathieu has been named one of five finalists for college football’s ultimate award, it was announced on ESPN Monday evening.

“This is a dream come true and I am humbled by this honor to go to New York to represent LSU,” Mathieu said. “It shows that hard work and persistence pays off. I am thankful for this opportunity and I want to thank my coaches and teammates for pushing me each and every day. Coach Miles, Coach (John) Chavis and Coach (Ron) Cooper are always pushing us to make us better. Without them and my teammates, this opportunity is not possible.”

“Tyrann is a special player and person,” said LSU head coach Les Miles. “We are honored to have him represent our football team in New York for the Heisman Trophy presentation.  He is a player that gives everything for his teammates and coaches. He’s a leader on the field and he is constantly making plays. We are excited that he and his family have this opportunity.”
Mathieu has been one of the most dynamic players in college football this season on both defense and special teams. He leads the top-ranked Tigers into the BCS National Championship Game in a rematch against No. 2 Alabama on January 9, 2012 in New Orleans.

His special teams play has ignited the Tigers throughout the year, none bigger than his two punt returns for touchdowns in the past two weeks. Mathieu became the first LSU player since Todd Kinchen in 1991 to return punts for touchdowns in consecutive games with a 92-yarder against Arkansas and a 62-yarder that swung the momentum of the SEC Championship Game.

He earned SEC Championship Game MVP honors for his efforts, becoming the first defensive player to do so since 1994.

Mathieu, the Associated Press SEC Defensive Player of the Year, is also a finalist for the Bednarik Award, presented to college football’s most outstanding defensive player. The recipient of that award will be announced at 8 p.m. CT Thursday from the ESPN College Football Awards in Orlando.

LSU Tigers in the Heisman Trophy Balloting (Top-10 only)