Mathieu Repeats as National Player of the Week 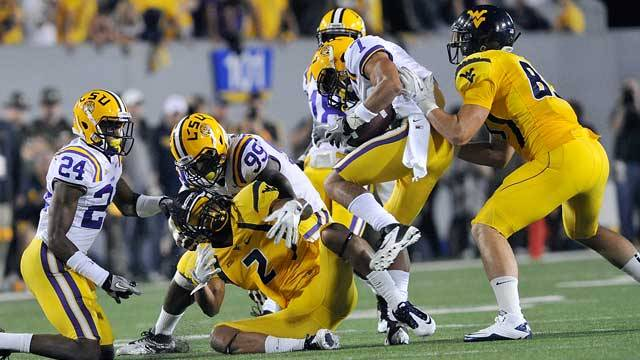 BATON ROUGE – For the second straight week a member of the LSU secondary has been tabbed as the Walter Camp National Defensive Player of the Week as cornerback Tyrann Mathieu was named this week’s recipient of the award following his performance in the win over 16th-ranked West Virginia.

Mathieu, a sophomore from New Orleans, had six tackles and forced two turnovers in leading the Tigers to their third win over a Top 25 team this year. Both of Mathieu’s forced turnovers came in the second quarter as the Tigers built a 27-7 lead at halftime.

Mathieu stripped and recovered a fumble following a catch by West Virginia receiver Brad Starks on the Mountaineers second possession of the game. It was the first of four turnovers by West Virginia.

Just before halftime, Mathieu had another improbable takeaway, batting a pass in the air on a corner blitz and then retrieving the ball for an interception. Mathieu returned the interception 16 yards to the 1-yard line where the Tigers scored two plays later for a 27-7 advantage at halftime.

Mathieu’s national honor comes a week after cornerback Morris Claiborne was cited by the Walter Camp Foundation for his play in the win over Mississippi State.

The Walter Camp Football Foundation is in its eighth season of honoring a player of the week on both offense and defense during the regular season.