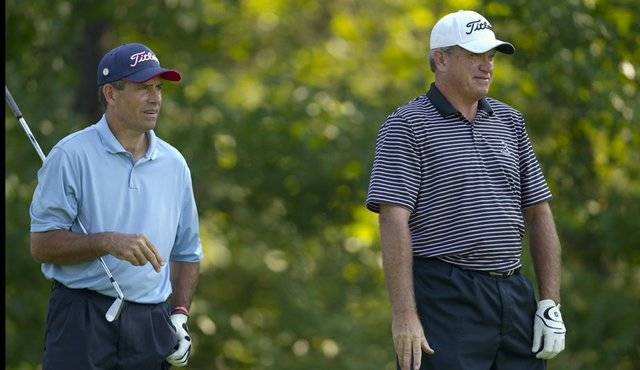 Lee clinched the 2011 U.S. Senior Amateur Championship by sinking a 4-foot par putt on the 18th hole to take the title. He actually joined his brother as a U.S. Senior champion as former LSU All-American Stan Lee won the same event in 2007 at Flint Hills National Golf Club in Andover, Kan.

The duo made history during the match play tournament after squaring off in the quarterfinal round as No. 46 seed Louis Lee knocked off No. 38 seed Stan Lee in 19 holes to advance to the semifinals.

According to the United States Golf Association, their quarterfinal match is believed to be the first match played between two brothers in a USGA championship in history.

“You could not have scripted it any better,” said Louis Lee, who drove to the championship in Virginia all the way from his home in Arkansas with his brother and their wives. “We’re brothers, but we are also best friends and are each other’s biggest fan. It was one of the best days of golf we’ve ever had as brothers.”

As he did in his semifinal match against the No. 63 seed William Thomas Doughtie on Wednesday, Louis Lee got off to a fast start against Pleat in the final. He sank a 10-foot birdie putt on the fourth hole to take a 1-up lead before nearly acing his tee shot for a conceded birdie on the par-three fifth hole while pushing his lead to 2-up through five holes. After making a three-putt bogey at the par-four sixth hole to drop back to 1-up, Lee won three-straight holes beginning at the ninth to grab a 4-up lead through 11 holes.

Lee appeared to have the match well in hand on hole No. 12 while sitting just 20 feet from the cup and his opponent off the green facing a difficult pitch. It seemed that a two-putt par would give Lee a comfortable 5-up advantage with just six holes to play in the championship.

But when Pleat converted a difficult up-and-down for par and Lee three-putted for bogey, that momentum turned momentarily to Pleat as Lee’s lead was cut to 3-up with six holes to play.

Within a 30-minute span, the tables had turned dramatically in Pleat’s favor following his birdie at No. 13 to cut the deficit to two holes. That deficit was then trimmed to just one hole after Lee hooked his tee shot into a water hazard on the par-three 14th hole as they entered the homestretch.

But Lee righted the ship while hitting each of the last four greens in regulation to put the pressure back on his opponent. Pleat faced 8-foot birdie putts on both the 17th and 18th greens to try and square the match to send it to extra holes, but neither would find the bottom of the cup. When Pleat’s birdie putt burned on the right edge of the cup , the stage was set for Lee’s winning 4-footer for par.

“I was afraid I was on the fast track to giving it away,” Lee said. “But I kind of reached deep down on the 16th, 17th and 18th holes. That 4-foot putt on the last hole was sweet when it went down. It was digging for that left lip and it went in. I let off a deep sigh of relief.”

Interestingly enough, Lee had not played a single competitive event in more than 25 years prior to playing this year at the 2011 U.S. Senior Amateur Championship.

When the two brothers met in the quarterfinals, it was agreed that the loser of the match would caddie for the winner for the rest of the championship. Having Stan on the bag in the championship final was a great help for Louis as the 59-year-old past champion provided a source of confidence and calming influence to the 2011 champion on the homestretch of Thursday’s competition.

“There’s no one in the world I’d rather be on the golf course with than him,” Louis Lee said. “Having him on the bag made all the difference. It’s been a great week. I’ll never forget Kinloch and the great people at this event. They’ve taken me in like family and I’ll never forget them.”