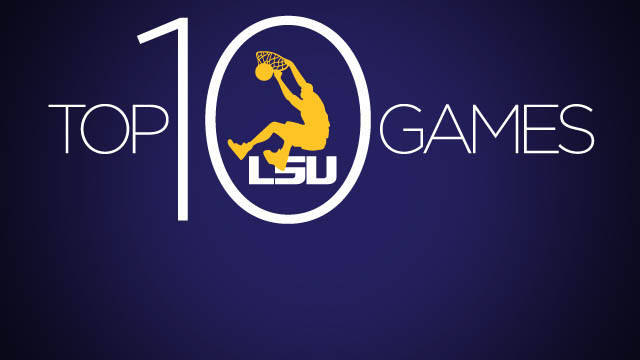 LSUsports.net has compiled what we believe are 10 of Shaquille O’Neal’s most important games, although not necessarily the greatest statistically, from his three LSU’s seasons (1990-92).

Let us know if you were there and which was your favorite by commenting below:

7. LSU 79, Florida 66 (February 27, 1991)
LSU clinches the 1991 SEC Championship in Gainesville as O’Neal has a pedestrian 19 points and 19 rebounds. He would not play again because of a stress fracture but already has done enough to earn SEC and National Player of the Year honors.

5. LSU 124, Texas 113 (At Houston, Jan. 2, 1990)
There was so much talent on display on both sides and they played to the level of the NBA venue, The Summit, as then-Chris Jackson had 51 points, Stanley Roberts had 26 points and 16 rebounds and the freshman O’Neal posted his first of six LSU career triple-doubles with 16 points, 19 rebounds and 10 rejections.

4. LSU 94, BYU 83 (March 19, 1992, NCAA 1st rd)
O’Neal led the charge through the opening round against the Cougars with his sixth and final NCAA triple-double – 26 points, 13 rebounds and an NCAA tournament single game record 11 blocks.

3. LSU 99, Tennessee 89 (March 13, 1992, SEC Quarterfinal)
One of those SEC Tournament games that has been talked about ever since and probably will be for years to come. LSU is easily rolling to a win when a Tennessee player intentionally fouls Shaquille O’Neal setting off a fight on the court that changed the complexion of the tournament. O’Neal had 16 points and 16 rebounds before being ejected and forced to sit out the semifinal the next day.

2. LSU 92, Arizona 82 (December 8, 1990)
Who doesn’t remember Dick Vitale wearing Keith Jackson out on ABC screaming about the sophomore who put his name squarely on the national scene with this one performance that ended with him swinging on the rim after a late game dunk? O’Neal had 29 points and 14 rebounds.

1. LSU 148, Loyola Marymount 141 (OT) (February 3, 1990)
Some think it remains the greatest game ever played in the 40-years of the Maravich Center. Seven LSU players were in double figures. LSU played to the Loyola Marymount tempo. Jackson had 34, Vernel Singleton 22 and O’Neal posted 20 points, 24 rebounds and 12 blocks. Despite several blocks, the late Hank Gathers kept forcing his way to the goal and would finish with 48 points of his own.