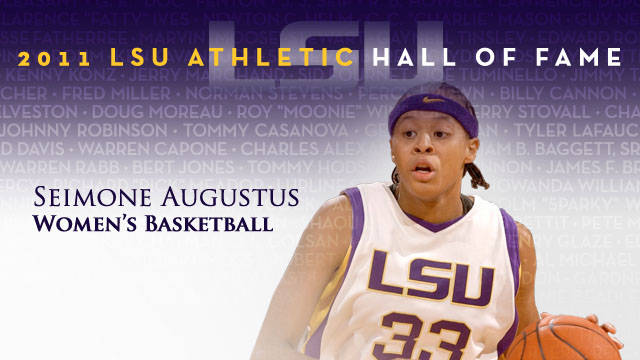 Former LSU Athletics Director Skip Bertman called her “the single most important recruit in the history of LSU Athletics.” The date was April 30, 2002. The nation’s top high school prospect, 18-year-old Seimone Augustus of Capitol High School in Baton Rouge, pledged her commitment to the LSU Lady Tigers. It would forever change the landscape of LSU women’s basketball.

It sent the late legendary coach Sue Gunter running through the halls of her second floor office as she watched local television coverage of the announcement. Ticket sales surged in an unprecedented fashion in the days that followed.

“This is not only great for LSU, I also think it’s great for Seimone and her family and for the people at Capitol,” Gunter said. “She’s a great addition for our program and she can play a lot of different positions.”

“I was really impressed with what LSU had to offer academically,” Augustus said. “They have a group of players who are determined to succeed.”

The ensuing four years would forever put LSU women’s basketball on the national scene, and Augustus would establish herself as one of the greatest players in NCAA history.

Prior to the phenom’s arrival in 2002, LSU went 18-12 and advanced to the second round of the NCAA Tournament.

A year later, LSU broke through starting a string of five straight NCAA Final Four appearances. Back-to-back 29-point games over Texas and Georgia, respectively, sent the Lady Tigers to their first Final Four. Augustus was the catalyst for three of those appearances and she brought people to the Maravich Center creating a scene never before seen.

Her dazzling moves and shot attracted fans of all ages. On Feb. 23, 2003, LSU would play before a crowd of 15,217 against Tennessee. LSU’s top-five crowds of all-time – all of which exceeded 12,000 fans – came during Augustus’ brilliant career.

“There was always one motto we lived by,” Augustus said. “No excuses, get it done. That is how we approached everything.”

That approach led Augustus to one of the best seasons in school history as a junior. She won the State Farm Wade Trophy, the Naismith Award and the John R. Wooden Award as the nation’s top player, a first for any Lady Tiger. She became the 23rd player in school history to reach 1,000 career points and the eighth to accomplish the feat in two seasons or less as LSU reached another Final Four.

As a senior, Augustus followed up 2005 with yet another National Player of the Year honor. She earned the Wade Trophy, Naismith Award and John Wooden Award again, and she was recognized as the Associated Press National Player of the Year in 2006. She closed her career as a starter in 140 games, a school record at LSU. She also led the nation in points per game with 22.7.

Augustus ended her career with 2,702 points — second most in school history – and she became just the fourth player and first since 1995 to reach the 2,000-point plateau. She rewrote the record books at LSU as she scored in double figures in a school-record 97 straight games. Augustus reached double digits in 132 of 140 career games, the most in NCAA history.

Beyond the statistics, was the bond she built with the fans, the community, the coaching staff and her teammates.

“LSU has the greatest fans,” Augustus said. “Being a hometown girl from Baton Rouge, I knew LSU always took pride in their athletic program. You always hear about Tennessee and Connecticut, but I wanted to be able to help put LSU up there on the map with them. We accomplished a lot during my time.

“I wouldn’t change it for anything. I got to play for one of the greatest coaches in history in Coach Gunter. I got to play with a group of women that became my family.”

Nearly eight years after her signing day, Augustus became the first woman in school history to have her jersey retired. On Jan. 24, 2010, her No. 33 jersey was unveiled in the Maravich Center rafters hanging proudly next to the likes of Pete Maravich and Shaquille O’Neal. Augustus wiped away the tears as a standing ovation roared through the PMAC.

The No. 1 pick of the Minnesota Lynx in the 2006 WNBA Draft, Augustus has taken her game to even further heights as a professional. She won the league’s Rookie of the Year award and she has become a three-time All-Star. Her career scoring average of 19.5 points per game is the third highest in WNBA history.

Augustus and her former teammate Sylvia Fowles became the first United States Olympians in LSU women’s basketball history as the two helped the Americans claim gold in Beijing in 2008. The duo expects to repeat the feat in London next summer.

After overcoming a torn ACL in 2009 and having three non-cancerous fibroids removed in May 2010, Augustus knows how to overcome adversity with the toughness she has shown. This season, she has led the Minnesota Lynx to the WNBA’s best record and a playoff berth while averaging 16.1 points per game.

“It has been a challenge in my career with the Lynx, but I never made excuses. I just kept working and now we are getting it done. We are the No. 1 team in WNBA right now and having fun doing it.”

On Friday, she will join a legacy that includes the coach who brought her to LSU, the late Sue Gunter. Augustus will be enshrined into the LSU Athletic Hall of Fame, becoming just the third Lady Tiger player to earn the honor.

“It means a lot to know that I am going to be in the Hall of Fame with Coach Gunter,” Augustus said. “She created the program at LSU and now we will always have that bond as LSU Athletic Hall of Famers.”

BATON ROUGE – The coaching tandem that helped lead Baylor to eight Big 12 championships and an NCAA title over the eight years they coached together in Waco is reuniting in Baton Rouge as Kim Mulkey has named Sytia Messer associate head coach for the LSU women’s basketball team.