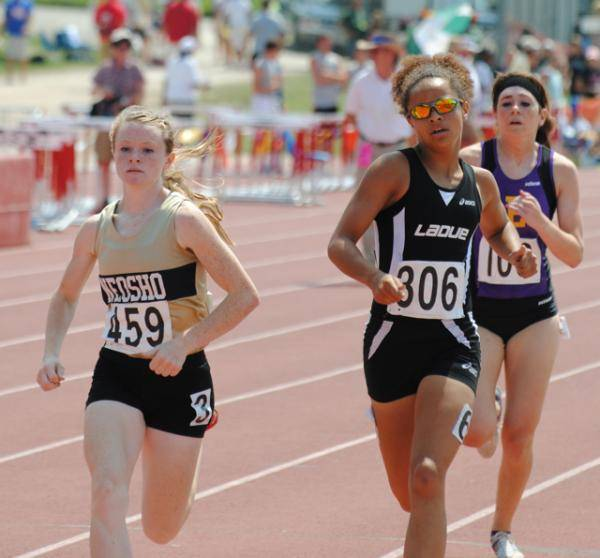 WITCHITA, Kan. – Led by a pair of gold-medal winning performances by St. Louis natives and future Lady Tigers Montenae Roye-Speight in the 400-meter dash and Samantha Levin in the 800-meter run, the Tiger and Lady Tiger recruits for the Class of 2011 captured a total of five medals in six days of action at the 45th USA Track & Field National Junior Olympic Championships.

This year’s competition featuring five LSU recruits from the Class of 2011 was held this week at Wichita State University’s Cessna Stadium in Wichita, Kan.

While winning individual gold medals in the young women’s division during this year’s meet, both Levin and Roye-Speight led the Gateway City United Track Club to a gold medal in Wednesday’s final of the 4×800-meter relay before teaming with fellow Lady Tiger recruit and St. Louis native Kendra White in an impressive gold-medal winning performance in the 4×400-meter relay in Sunday’s finale.

Roye-Speight enjoyed perhaps the most impressive individual performance of the meet with her victory in Sunday’s final of the 400-meter dash as she set a new lifetime personal record to go home with the gold.

She crossed the finish line in 53.62 seconds to win the 400-meter title by three tenths of a second over the time of 53.92 run by North Carolina native Tsheila Mungo.  Roye-Speight’s 53.62 clocking drops her best from 53.73 that she set at the USATF Junior Outdoor Track & Field Championships in Eugene, Ore.

With her performance, Roye-Speight became the No. 6-ranked prep 400-meter runner in the nation for the 2011 outdoor season and the No. 4-ranked sprinter in the Class of 2011.

In the wake of her bronze medal third-place finish in the 800-meter run last weekend at the Pan American Junior Championships, Levin won the gold medal Saturday at the USATF National Junior Olympics after running 2 minutes, 8.23 seconds. After clocking the fastest qualifying time of 2:11.51 in the preliminaries on Thursday, Levin was not challenged in the final in beating Samantha Berggren (2:11.51) to the tape.

On Wednesday, Gateway City United Track Club won gold in the 4×800-meter relay as Levin led off and Roye-Speight ran the third leg on the foursome that clocked 9:16.89. It was a dominating performance for the win as they finished more than 32 seconds ahead of the 9:49.05 run by runner-up Track Houston.

Levin and Roye-Speight each won a third gold medal during this year’s USATF Junior Olympics with the final event of the meet as they teamed with White to lead Gateway City to the 4×400-meter relay title.

With Roye-Speight running leadoff, Levin running the second leg and White on the anchor, Gateway City cruised to victory in a time of 3:39.39 to finish well ahead of Cleveland Express Track Club (3:43.77) and Lancaster Lightning (3:43.98) for the Junior Olympics gold medal. Gateway City advanced to the final on Thursday after running the fastest qualifying time of the day at 3:47.13.

Leading the way for the future Tigers during this year’s meet was Sierra Vista, Ariz., native Jeremy Tuttle as he captured the silver medal in the young men’s division of the hammer throw on Tuesday.

Tuttle threw a series-best of 179 feet, 10 inches to win the silver medal behind the winning effort of 192-6 by Georgia native Edward Brentnall in the final. In addition, Tuttle nearly climbed atop the medal podium for a second time during the week after taking fourth place in the young men’s discus throw Friday thanks to a top mark of 179-11 that finished behind discus champion and Indiana native Gabe Hull (200-11).

Tuttle has been impressive during his senior season at Buena High School as he has set new bests in three different throwing events with 2011 seasonal bests of 186-10 in the discus, 198-6 in the hammer and 201-4 in the javelin throw. Each PR was set at the Great Southwest Track & Field Classic in May.

Future Tiger high jumper William LeBlanc also saw action this week at the USATF Junior Olympics with a fourth-place finish in the young men’s high jump as he cleared a top mark of 6-6 ¾.