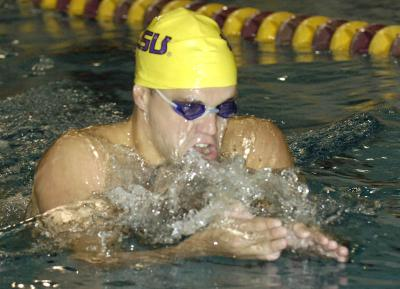 Through out his terrific four-year athletic career, Gloeckner was a perennial member of the SEC Academic Honor Roll and took home the 2009 SEC Male-Scholar Athlete of the Year award.

A native of Germany, Gloeckner came to LSU as a freshman in 2005, received his bachelor’s in finance in 2009, and graduated with honors from the M.B.A. program in May 2011.

The Esther R. Sawyer Scholarship Award is presented to individuals who are entering or enrolled in a graduate program in internal auditing or business at an IAA-endorsed internal audit program and have written a manuscript on a specified topic related to modern internal auditing.

Gloeckner received the award for his manuscripts submitted in March 2011 on the topic of “rotational programs.” These programs, implemented by organizations” internal audit departments, allow business units to rotate through the internal audit function before moving up in a company. Additionally, the programs offer employees the opportunity to learn about every function of a business; similar to the way internal auditors must scrutinize details of a company.

Gloeckner received $1,000 for his manuscript title “The Double-Edged Sword of Rotational Programs within Internal Auditing,” in which he explains that rotational programs may cause difficulty for auditors to continue a career in the profession of internal auditing.

“Because internal auditors are supposed to be objective and, to a certain degree, independent, rotating through internal auditing can cause biases and other problems for employees rotating in or out,” Gloeckner asserted regarding his paper. “My manuscript is about researching and evaluating these issues in regards to the internal audit function and to the organization as a whole.”

As an intern, Gloeckner worked in internal auditing at Cleco Co. in Pineville, La. and in the enterprise risk services division at Deloitte & Touche in New York.

Gloeckner, who passed the CIA and CFE exams, also plans to move to New York in the fall to work for Deloitte.

For more information about the IIA Research Foundation, visit www.theiia.org/research.