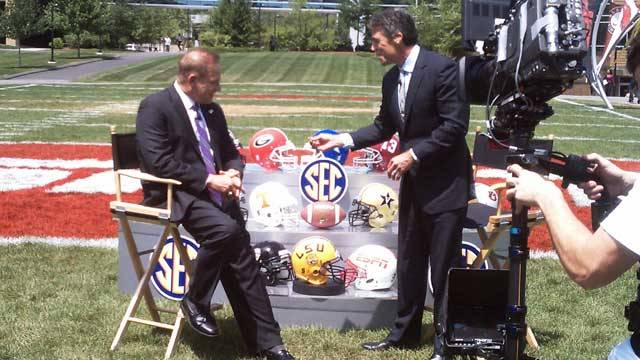 Miles will appear on several of the network’s shows and platforms throughout the day with Arkansas’ Bobby Petrino, Alabama’s Nick Saban, Kentucky’s Joker Philips, Vanderbilt’s James Franklin and Georgia’s Mark Richt. The six other league coaches appeared on Monday.

It will be the second time this summer that Miles has made the trek to the popular headquarters. Miles followed quarterback Jordan Jefferson in an appearance in June.

Miles’ day begins with a live segment on ESPN’s First Take at 10:10 a.m. Chris Fowler and Erin Andrews will be on hand throughout the day during portions of the interviews.

The Tigers, picked second overall by the media at last week’s SEC Media Days, open the season against Oregon on Sept. 3 in Cowboys Stadium in Arlington. Kickoff for the Cowboys Classic is scheduled for 7 p.m. on ABC.

LSU reports to campus for preseason camp on Aug. 3 with its first practice scheduled for the following day.