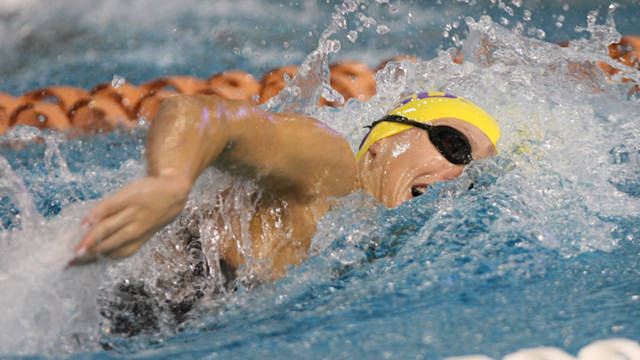 Kendall began her busy final day of competition with a first place finish in the women’s 100 freestyle in 55.78. After the 100-free, she exploded in the 50-butterfly with a blistering 27.25 to win by over a second and a half.

Kendall’s first place finishes in the 100-free and the 50-fly were both top-16 times nationally and bode well for next month’s US Nationals. She will also be competing in the 100-fly.

Sara Haley and Audrey Lawson also qualified for Olympic Trials in the 200-fly with their strong showings.

Haley finished second in the 200-fly behind Texas A&M swimmer Rita Medrano with a time of 2:15.71.

“The performances for all three of those women really puts their goals in focus for the upcoming National Championships,” Head Coach Dave Geyer said. “All of them are performing at or near lifetime best times.  Mentally knowing they have their Olympic Trial standards achieved, they can relax a little and focus on the race and performances ahead at Palo Alto in August.”

US Nationals will be held in Palo Alto, California August 2-6.