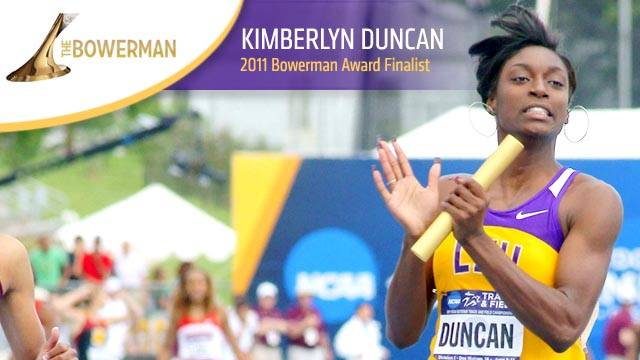 BATON ROUGE – After wrapping up her sophomore season as a three-time NCAA champion and the top individual point scorer at the 2011 NCAA Division I Outdoor Track & Field Championships, it came as no surprise Thursday when Lady Tiger sprint star Kimberlyn Duncan was selected one of three finalists for the sport’s premier individual honor in The Bowerman.

Now in its third year, The Bowerman is collegiate track and field’s equivalent to the Heisman Trophy and is presented annually by the U.S. Track & Field and Cross Country Coaches Association to the premier male and female athlete in the country following each collegiate season.

Duncan is a leading contender to take home The Bowerman with her performance this year, joining Texas A&M senior sprinter Jessica Beard and Arkansas junior pole vaulter Tina Sutej as finalists for 2011.

The winners of this year’s Bowerman Award will be announced on Dec. 14 in a special banquet as part of the USTFCCCA annual convention being held Dec. 12-15 in San Antonio, Texas.

Duncan emerged as the NCAA’s most dominant short sprinter during the 2011 season while sweeping the NCAA Indoor and NCAA Outdoor titles in the 200-meter dash. In addition, she anchored the Lady Tigers to an NCAA title in the 4×100-meter relay and finished as the NCAA runner-up in the 100-meter dash for a total of 20.5 points scored at the NCAA Division I Outdoor Track & Field Championships.

In the final of the 200-meter dash at the NCAA Outdoor Championships, Duncan made history by setting the low-altitude collegiate record in the event with her wind-legal personal best of 22.24 seconds.

“I’m honored and humbled to be considered for an award like The Bowerman,” Duncan said. “I could not have imagined coming this far this early in my career. I’m blessed to have great coaches and teammates at LSU that have really pushed me to achieve many of the goals that I’ve set for myself. While I am honored to be chosen as a candidate for an award like The Bowerman, this only gives me more motivation to work even harder in the future to go as far as I can in this sport.

Not only has Duncan been honored as a finalist for The Bowerman, but she is also a recipient of the 2011 Corbett Award and a recent finalist for the 2011 Honda Sports Award for women’s track and field.

The Corbett Award is presented annually by the Allstate Sugar Bowl and the Greater New Orleans Sports Hall of Fame to both the top male and female amateur athlete in the state of Louisiana. The Honda Sports Award for women’s track and field is presented each year to the sport’s top athlete at the collegiate level.

A native of Katy, Texas, Duncan was the top individual point scorer among all female competitors at the 2011 NCAA Division I Outdoor Track & Field Championships held in Des Moines, Iowa, from June 8-11 as she scored 20.5 points to lead the Lady Tigers to a third-place finish in the team race. LSU scored 43.5 points during the four-day meet held at Drake Stadium.

She became the new low-altitude collegiate record holder in the 200-meter dash when she set a new wind-legal personal best of 22.24 to complete the 2011 season sweep of NCAA titles in the event. She also won the NCAA Indoor title in the 200 meters after running 22.85 in the national final in March.

Duncan is the sixth athlete in NCAA history to sweep both the NCAA Indoor and NCAA Outdoor crowns in the 200-meter dash in the same season, and the first Lady Tiger since Sowell during the 1989 season.

She has proven to be the nation’s most dominant 200-meter sprinter in recent memory as she has recorded three of the Top 10 times under all conditions in collegiate history in 2011. While her top wind-legal time of 22.24 ranks No. 7 on the all-time collegiate list in 200-meter races run under all conditions, Duncan ran the No. 3-ranked time with a windy 22.18 at the LSU Invitational on April 2 and the No. 9-ranked time in a wind-aided 22.27 in winning the SEC Outdoor title on May 15.

That gives Duncan the distinction of being the only 200-meter sprinter in NCAA history appearing on the NCAA’s all-time all conditions list in the event on more than one occasion.

Duncan also anchored the Lady Tigers to their 13th NCAA title all-time with the 4×100-meter relay as she joined senior Kenyanna Wilson, junior Semoy Hackett and junior Rebecca Alexander to record the eighth fastest time in NCAA history at 42.64 and defeat the four-time defending champions from Texas A&M.

Not only that, but Duncan nearly won a third NCAA event title at the NCAA Outdoor Championships for the weekend as she finished as the 2011 NCAA runner-up in the 100-meter dash after setting a new wind-legal personal best of 11.09 in an exciting national final. She finished just .01 seconds behind the national champion Candyce McGrone of Oklahoma, who clocked a winning time of 11.08.

While leading the Lady Tigers to a pair of third-place team finishes at the NCAA Championships in 2011, Duncan also led the way in conference action with a season sweep of SEC team championships.

In a preview of what would come at the NCAA Championships, Duncan swept SEC championships in the 200-meter dash and captured one relay title as the anchor leg of LSU’s 4×100-meter relay. In clocking her indoor PR of 22.78 at the SEC Indoor Championships, Duncan set the world-leading mark for 2011 as she ran the fastest time by a woman indoors since Bianca Knight’s American indoor record of 22.40 in 2008.

Duncan saw her 2011 season come to an end at Hayward Field in Eugene, Ore., with a fifth-place finish at the 2011 USA Outdoor Track & Field Championships. She ran a wind-legal 22.35 in her 200-meter finale as she came up just short in her bid to qualify for the World Championships.